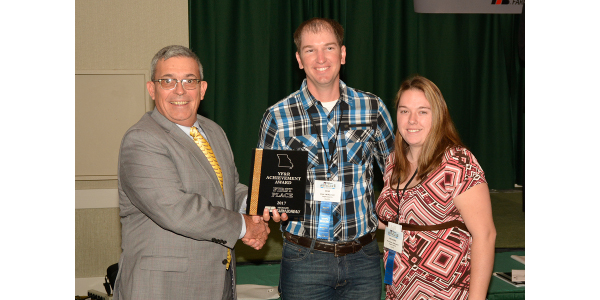 JEFFERSON CITY, Mo. — Clint and Mercedes Wilkerson, of Carthage, won the Missouri Farm Bureau (MFB) Young Farmers and Ranchers (YF&R) Achievement Award during the organization’s 103rd annual meeting December 5 at the Lake of the Ozarks. The Achievement Award is designed to recognize the management and leadership skills of young adults who work full-time on a farm or ranch.

The Wilkersons received a plaque from MFB President Blake Hurst during the annual YF&R breakfast. Their award included a $500 check from the Missouri Farm Bureau Foundation for Agriculture, a $500 check from Ford Motor Company, and one-year free use of a Gator utility vehicle from Sydenstricker John Deere.

The farm couple also won a trip to Nashville, Tennessee, to represent Missouri at the American Farm Bureau Federation (AFBF) YF&R Achievement Award Contest this January. The contest is part of the AFBF Annual Meeting where they will compete for the grand prize of a new Ford truck and paid registration to the AFBF YF&R Leadership Conference in Reno, Nevada, courtesy of Southern Farm Bureau Life Insurance. Runner up wins a Case IH Farmall 50A tractor from Case IH. Third and fourth place earn 40”combination roll top tool cabinets and a $500 parts card from Case IH, along with $2,000 of Stanley Black & Decker merchandise.

Clint is the eighth generation on one of the oldest farms on record in Jasper County. He earned a college degree in criminal justice with plans to go into law enforcement. When his grandfather died in 2011, he had the opportunity to step into the farm operation. Today, the Wilkersons raise 120 head of Black Angus beef cows with three registered Black Angus bulls. His cows calve in the spring and fall. Calves are sold on market, but heifers are held back for replacements to the herd. Clinton currently rents the land with plans to eventually purchase. He grinds his own feed and also raises fescue seed for sale.

Clint and Mercedes were married three years ago and she helps on the farm when not working at a local appliance store and school. She grew up on a small farm raising milk goats, cattle, pigs and horses. Although Mercedes received a degree in therapy, as a teenager she was hired by a family friend to repair appliances and became very proficient in the trade.

The Wilkerson family has long been involved in Farm Bureau. Clint’s parents served on the state YF&R committee and won the YF&R award in 1988. They were Missouri Extension’s Jasper County Farm Family of the Year in 2015.

Second place in the contest went to Donnie and Ashley Hays, of Monroe City in Marion County. The couple received $200 and an expense-paid trip to the AFBF Annual Meeting.