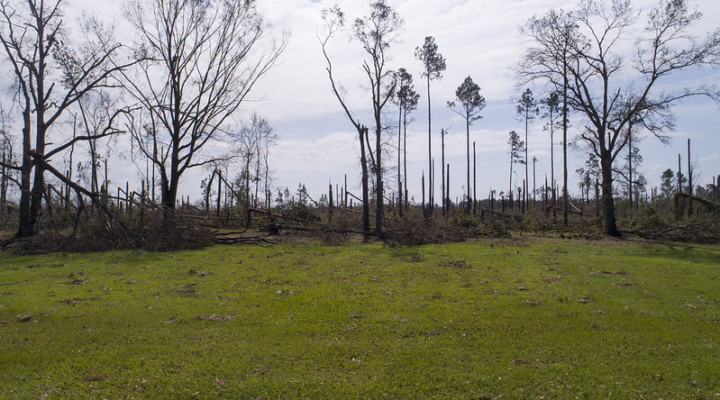 Beyond downed power lines and damaged buildings, major storms such as hurricanes uproot the lives of fish and wildlife as well, according to research conducted at the University of Georgia.

ATHENS, Ga. — Beyond downed power lines and damaged buildings, major storms such as hurricanes uproot the lives of fish and wildlife as well, according to research conducted at the University of Georgia.

For example, high winds destroy nesting sites in trees, debris and runoff in waterways cause a drop in oxygen levels, and churning waves on the shore disrupt sea turtle nests. After the storm, felled trees create more food for pests, creating the potential for outbreaks.

In the year since Hurricane Michael made landfall on Florida’s Gulf Coast, several researchers at the UGA Warnell School of Forestry and Natural Resources have surveyed the damage wrought, and preliminary results show nature’s fury can have a profound effect on a range of creatures.

Across rural parts of South Georgia where wild turkeys are a natural part of the landscape, trees blown down by Michael reduced potential nesting sites—and that’s a problem, said Michael Chamberlain, a professor of wildlife ecology at Warnell.

“You’d think that turkeys could roost anywhere, but we’ve observed that they have a finite number of places in their range that they deem acceptable for roosting,” said Chamberlain. “So, when a hurricane blows ashore and trees go down, it has potential to change how turkeys can use their ranges. For some, such as the Rio Grande subspecies, they may only have a few roost sites in their entire home range. So, even if one is impacted, it’s a problem.”

Because of their size, turkeys already have a limited range. When their potential roosting spots are reduced, it makes them more vulnerable to predators and also causes the birds to burn more energy—two factors that can affect their survival.

But while these trees may no longer be home to turkeys, they do invite new residents: bark beetles. It’s normal to find these beetles in a forest or stand of trees, but an abundance of felled or stressed trees following a storm invites more beetles—and potential problems.

“When there’s enough host material—this can be trees on the ground or standing trees that are dead or dying—these beetles can reproduce quickly,” said Kamal Gandhi, a professor of forest entomology at Warnell. She and Elizabeth McCarty, an assistant professor of forest health outreach, are now examining populations of bark beetles following Hurricane Michael to gauge levels of infestation.

Beetles will always exist, she said, but how the wood is cleared after a storm can have an effect on future damage by beetles. She and her team are working with the Jones Center at Ichauway to determine the best forest management techniques—for example, burning or salvaging the wood—and how that affects beetle populations.

But before hurricanes move inland, they first must cross the beach. As it happens, hurricane season, June through November, intersects with sea turtle nesting season, which is May through October. When storms such as September’s Hurricane Dorian scrape up the East Coast, it puts nests in precarious positions.

Nests in North Carolina, where the storm eventually made landfall, likely haven’t fared as well as nests in Georgia or South Carolina. Although there’s always a risk to sea turtle nests whenever a violent storm moves toward the coast, said Warnell professor Joe Nairn

“While many of the nests have hatched by now, many others are still incubating,” said Nairn, who oversees the DNA testing of sea turtle egg samples through the Northern Recovery Unit Loggerhead DNA project. “Washover from storm swells, storm surges and flooding will reduce or eliminate hatch success and nests can be completely washed away by erosion from storm swells.”

By early October, more than 14,000 nests had been recorded on beaches in three states. But the effects of Dorian are still being assessed by officials in North Carolina, he said.

Even animals that live underwater can feel the effects of a hurricane. In Florida’s Apalachicola River, the fragile population of sturgeon was disproportionately affected by the effects of Hurricane Michael, according to data being analyzed by Warnell graduate student Brendan Dula.

The fish, which can live for decades and grow to be more than 7 feet long, was listed as threatened in 1991 after the harvesting of its eggs for caviar drastically reduced its numbers. Since then its population has made some strides, but still number about 2,000 in the Apalachicola River.

A master’s student, Dula was part of a team that had been studying sturgeon there for the past six years when Michael hit. “A lot of homes and equipment were destroyed, so initially we didn’t get a lot of info,” said Dula. “But then about 10 days later someone went out and counted about 10 dead sturgeon.”

That report coincided with additional reports of fish kills along the Apalachicola, and instrument readings taken after the hurricane showed a drop in water oxygen levels. The drop is likely due to a large amount of organic matter that flowed into the river during and after the storm, said Dula, and because sturgeon live at lower depths, they are particularly susceptible to low oxygen levels.

Among adult sturgeon that Dula had tagged with acoustic transmitters, he discovered about 46% of the population died due to a combination of low oxygen levels and habitat loss after the storm. Those that survived, he said, migrated out into the Gulf of Mexico earlier than usual.

What’s still unclear, though, is the effect the storm had on young fish. Typically, the first year of a sturgeon’s life is the most dangerous, so upcoming samples may determine how well they fared. “Younger fish were definitely in the river when the storm hit,” he said. “Now, we’re looking at what we had this year, which is a slightly higher number than last year—so, it didn’t kill off all of them.”

Moonbeam adds a big bang of flavor to Galaxy tomatoes