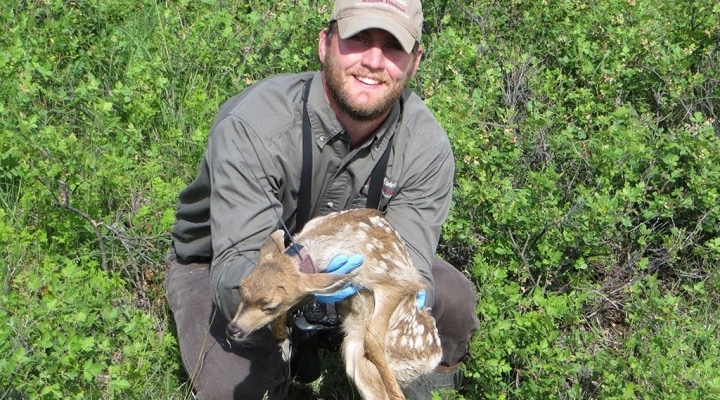 “I truly believe the awesome outdoor recreational opportunities we have here in South Dakota greatly contribute to the excellent quality of life of the folks who live here and our visitors,” said Kevin Robling (pictured above). “It is our job as a department to conserve our state’s outdoor heritage, connect people to the outdoors and to enhance the quality of life for current and future generations.” (Courtesy Photo)

After graduating from SDSU with his bachelor’s degree in wildlife and fisheries sciences in 2008, Robling pursued graduate school and earned his master’s degree in wildlife sciences in 2011. In addition to being a student, he played as an offensive lineman for the SDSU Jackrabbits football team and was a member of the All-Conference Academic Team’s in 2006, 2007 and 2008, All-conference in 2007 and 2008, Academic all-American in 2008, and went onto receive a NCAA post-graduate scholarship.

“One of my favorite memories from my time at SDSU was beating NDSU in 2007 for the conference championship in front of a huge home crowd and then beating them again in 2008 in the Fargo dome in front of their home crowd,” said Robling.

While at SDSU, Robling found his college football coach, John Stiegelmeier, and professor, Jonathan Jenks, to be most influential; he credits Stiegelmeier for inspiring him to make a difference each day and Jenks for providing him with meaningful mentorship throughout his time as a student and into his professional career.

He particularly found his large mammal ecology class to be most interesting and one that he continues to find helpful in his role today.

“We took a field trip to the Black Hills to capture and radio collar mountain lions and bighorn sheep – that is where I realized large mammal research and management was the specialized career path I wanted to pursue,” said Robling.

An Early-Found Passion for the Outdoors

“My father introduced me to the great outdoors and took me hunting and fishing starting at a very young age,” said Robling. “When I was 12 years old, I remember learning about wildlife biology through 4-H and I have pursued that passion ever since.”

Growing up and working on a family farm near Lydia, Minnesota, Robling credits his upbringing for his strong work ethic, which he believes has largely contributed to his career success.

“My mother was a state senator in Minnesota for 16 years and I really learned how to communicate and develop relationships from her,” said Robling. “My desire to lead a team and focus on teamwork developed early on through my involvement in 4-H, high school and college sports and throughout my professional career.”

Turning a Passion into a Career

Shortly after earning his graduate degree, Robling began his career with the South Dakota Game, Fish and Parks as a wildlife resource biologist in Sioux Falls in 2011, then worked as a big game wildlife biologist in Rapid City from 2012-2017 and a special projects coordinator in Pierre in 2018. He went on to serve as the deputy secretary in Pierre from 2019-2020 and the interim secretary in December of 2020 before stepping into his current role.

During that time, Robling was recognized with several awards including the 2014 Outstanding Performance and 2015 Outstanding Teamwork Awards from the South Dakota Game, Fish and Parks, and was named the 2016 Wildlife Manager of the Year by the South Dakota Bowhunter’s Association.

Through his various roles, he has been involved in strengthening the big game research and management program in South Dakota, expanding recreational opportunities on public lands, reducing participation barriers and simplifying regulations.

Most notably, he was assigned to a special project in 2017 in regard to non-meandered waters, which are bodies of water overlying private property that have flooded as a result of years of rainfall and that are not part of a meandered basin. Robling was tasked with bridging the gap between landowners and outdoor enthusiasts to allow hunting and fishing on non-meandered waters. His efforts included creating agreements, discussing opportunities with landowners, trying to keep waters open and opening waters that had previously been closed. As a result of his work on the project, Kelly Hepler, the previous department secretary, appointed Robling to his previous position as deputy secretary.

In his role as department secretary, Robling says he most looks forward to working with landowners, farmers, ranchers, sportsmen and women and other outdoor enthusiasts who have a passion for conservation, wildlife, hunting, fishing, trapping and camping.

“I truly believe the awesome outdoor recreational opportunities we have here in South Dakota greatly contribute to the excellent quality of life of the folks who live here and our visitors,” said Robling. “It is our job as a department to conserve our state’s outdoor heritage, connect people to the outdoors and to enhance the quality of life for current and future generations.”

So far, he says building relationships, finding compromise and strengthening the state’s outdoor heritage has been most rewarding about his career. Specifically, his favorite part about working for South Dakota Game, Fish and Parks has been striving to make a difference each day and the people and passionate staff on “Team GFP.”

Outside of work, Robling enjoys spending time outdoors with his family.

“My wife Holly, who is also an SDSU grad, and I have deep roots in agriculture, and we continue to grow our cow-calf herd today to ensure our three children Reese (4), Sawyer (4) and Cash (2) also develop a strong work ethic and a love for the outdoors,” said Robling. “When I’m not at home or in the office, my family and I are outside, and we are outside a lot! From camping in our state parks to big and small game hunting across the state, people can find me on a lake, in a tent or camper, on a horse, or on a tractor feeding my cows with one of my kids by my side.”

As an SDSU alum, Robling encourages young adults to consider pursuing careers in the in the fields of wildlife and fisheries, conservation, natural resource management and law enforcement.

“If students have a passion for the outdoors and serving people, this career is a perfect fit,” said Robling. “It truly is where a passion turns into a career.”