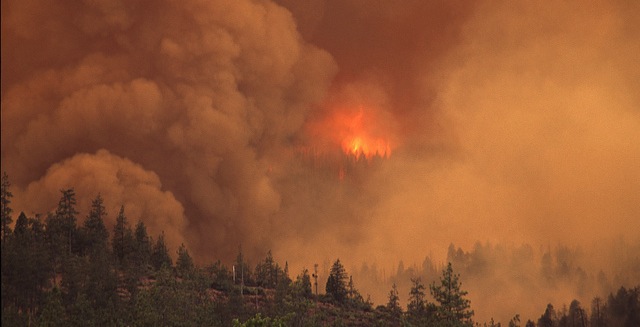 Authorities say a wildfire killed three ranch hands in the Texas Panhandle who were trying to usher cattle away from the flames. (Bureau of Land Management Oregon and Washington, Flickr/Creative Commons)

STERLING, Colo. (AP) — The Latest on wildfires burning across the country’s midsection (all times local):

Authorities say a wildfire killed three ranch hands in the Texas Panhandle who were trying to usher cattle away from the flames.

Gray County Judge Richard Peet said Tuesday that the two men and the woman were killed by a wildfire that flared Monday afternoon.

Peet, the county’s top administrator, says one of the three apparently died of smoke inhalation late Monday while the other two suffered severe burns and died while being taken to hospitals. Peet says winds of more than 55 mph fanned the flames.

The Gray County fire was separate from one to the west near Amarillo and from another much larger one just to the north near the Oklahoma border that has burned 156 square miles of land.

Authorities say wildfires have burned about 625 square miles in Kansas, damaging dozens of structures and forcing thousands to evacuate.

Kansas Department of Emergency Management Katie Horner says 10,000 to 12,000 people voluntarily evacuated their homes Monday night in Reno County. She says 66 people were in shelters Tuesday in Hutchinson as crews continued fighting fires that started over the weekend.

The largest of the blazes was burning in rural southwest Kansas’ Clark County, where about 545 square miles has burned. Horner says 30 structures have been damaged, and bridges have been compromised. That fire is now 61 percent contained.

Evacuations also have been ordered in Russell, and Comanche counties.

Horner says all but four of the state’s 105 counties are under red-flag warnings of critical wildfire conditions.

Authorities say as many as four firefighters have been hurt battling fires in the Texas Panhandle.

Texas A&M Forest Service spokesman Phillip Truitt says the four were hurt Monday as one fire intensified near Amarillo and another larger one spread in the far northeast corner of the Panhandle near the Oklahoma border.

Truitt said Tuesday that one of the firefighters injured worked for Pantex, the nuclear facility northeast of Amarillo, and the other for a volunteer department in the region. He provided no details on the nature of their injuries.

It was not immediately clear how the other firefighters were hurt or the extent of their injuries.

Truitt says the larger fire covers some 156 square miles near the Oklahoma border.

A pair of fires in the Texas Panhandle burned more than 100 square miles. One of the blazes near Amarillo threatened about 150 homes.

In Colorado, a fire in rural Logan County burned more than 45 square miles, forced the evacuation of three schools and threatened as many as 900 homes. The Logan County Emergency Management Office said at least four structures, including three homes, were destroyed.

In Kansas, wind-blown fires, some originating in Oklahoma, forced the evacuations of several small towns and the closure of some roads, including a couple of short stretches of Interstate 70. Crews used two Black Hawk helicopters Monday to dump water on some of the Kansas fires.