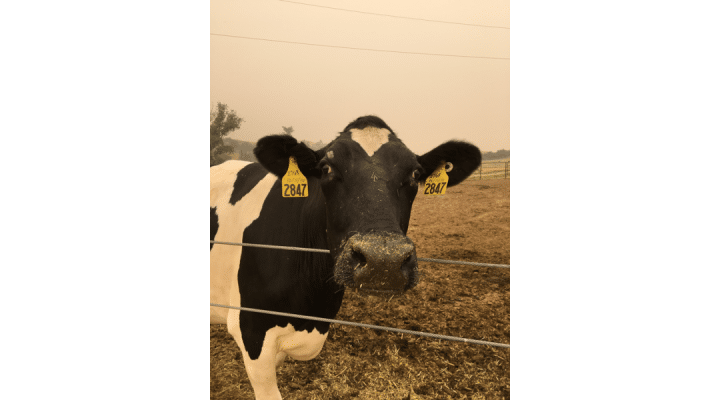 A dairy cow during a smoke event in Idaho, USA, during the 2020 Pacific Northwest wildfire season. (Photo: Amy L. Skibiel)

PHILADELPHIA — Increasing frequency and size of wildfires in the United States over the past several decades affect everything from human life and health to air quality, biodiversity, and land use. The US dairy industry is not exempt from these effects. The Western states, where wildfires are especially prevalent, are home to more than two million dairy cows that produce more than 25% of the nation’s milk. A new report in the Journal of Dairy Science® examines how dairy cattle in the Western United States may be affected by unique air pollutants from wildfire smoke.

The research team observed a group of Holstein cows in Idaho throughout the 2020 Pacific Northwest fire season (July to September). The cows were exposed to ambient air quality, temperature, and humidity, and the researchers monitored milk yield and tested blood for health status indicators. Based on the team’s defined thresholds for smoke exposure, cows were exposed to wildfire-derived particulate matter for seven consecutive days in mid-September, at levels 10 to 23 times the US Environmental Protection Agency’s 24-hour average air quality limits.

During the seven-day period of smoke exposure, cows produced less milk, which also persisted for seven days post-exposure. Higher air temperature and humidity, combined with greater levels of fine particulate matter, altered protein and fat metabolism and reduced immune cell populations in the cows’ blood. The balance of essential minerals in the blood was also altered with the combination of increased temperature and humidity along with high levels of fine particulate matter—possibly due to perspiration or to the body’s stress responses. The team note that further research is required to understand the causes and consequences of electrolyte imbalance with exposure to fine particulate matter.

Respiratory problems are among the leading causes of mortality for non-predator cow and calf deaths in the US, and reductions in immune cell populations in cows’ blood may indicate a dampened immune response and, thus, increased vulnerability to infection. Along with the reduced milk production observed in cattle exposed to wildfire smoke, the team’s findings highlight implications for dairy cattle welfare, costs to farmers, and the smooth functioning of the US dairy industry as wildfires continue to pose an increasing threat in the current era of climate change.