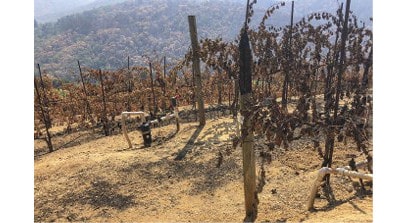 This vineyard outside Healdsburg suffered severe damage from the LNU Lightning Complex fire, but for most grape growers, smoke from nearby fires presents a greater concern. (Photo/Courtesy Ryan Petersen)

SACRAMENTO, Calif. — As farmers and ranchers directly hit by wildfires continue to assess property damage and losses, smoke and ash from blazes burning throughout the West have created their own problems and concerns.

Perhaps the most serious impacts have been felt by winegrape growers, some of whom have had their entire crops spoiled by smoke and rejected as unusable by wineries.

Sonoma County winegrape grower Ryan Petersen’s vineyard outside Healdsburg suffered burns to half the property from the LNU Lightning Complex fire earlier this month. Though the other half of the vineyard did not get scorched, he said none of the grapes will be salvageable because of “significant damage” from the smoke.

Petersen said he is not alone. He manages vineyards for clients throughout the Sonoma County region whose grapes have also been affected by smoke, some at levels wineries will not accept. Many continue to sit on pins and needles as they await test results about the fate of their crops.

ETS Laboratories, the state’s primary lab for smoke analysis on winegrapes, has reported “an unprecedented demand” for its services, with wait times on results for new grape samples stretching into early to late November.

“If there’s a winery that’s waiting on a test result to pick, by the time they get a test result back, your crop may be past harvestable,” Petersen said.

Measuring “smoke taint”—and assessing risk for smoky off-flavors in wine—is not “black and white,” he said, especially for farmers whose crops have borderline test results.

Off-flavor tends to show up earlier in lighter wines, whereas bolder, heavier wines tend to mask it better. Some palates detect off-flavor more readily than others. Smoke taint can also appear later during bottle aging. Whether grapes with some risk of off-flavor become rejected depends on the winery’s willingness to “roll the dice,” Petersen added.

“I know several wineries, smaller wineries, that have said, ‘I’m not going to crush anything. I just can’t take the risk,'” he said.

Sonoma County farmer Domenic Carinalli said the wineries to which he sells grapes have required growers to “sign a paper that if (the grapes) did have a taint to them, that they wouldn’t have to buy them.” Because he farms 25-30 miles away from the fires, he said the wineries have been “pretty happy” and “not overly concerned” about his grapes.

Smoke and ash have also affected a number of other crops and livestock.

Fresno County farmer Mitch Sangha said smoke-choked, hazy skies have slowed drying of his raisin crop, which needs “sun intensity” that has been lacking for weeks. He estimated the smoke cover will likely add at least another week to the fruit’s drying process.

“It’s just going to push us into a later season, where then we have a threat of rain,” Sangha said, noting that rained-on grapes would need to be reconditioned and could suffer from mold. Crop insurance will not cover any damage after Oct. 20, he added.

Unlike winegrapes that could be affected by ash that settles on the fruit, Sangha said ash is not a big concern for raisins, which go through another wash after drying.

At Valley Sun Products in Newman, which produces sun-dried tomatoes, Operations Manager Cesar Corona said two fires burning near the facility’s dry yard have deposited “a lot of ash residue” on its drying tomatoes, necessitating another wash and sulfuring process to eliminate contaminants and “get the flavor back to where it needs to be.” He noted smoke cover has also prolonged the drying process by an extra two to four days.

For livestock, smoke inhalation could lead to health complications such as respiratory disease.

Billie Roney, who runs cattle in Butte, Tehama and Lassen counties, recalled the 2018 Camp Fire, after which she said her cattle “looked horrible” when smoke and ash from that fire engulfed their surroundings. This year, though she has not yet noticed signs indicating her cattle are ill, she said she’s been vigilant about “keeping them on a very high-level plane of nutrition,” noting that many of her cattle are home early from summer mountain pastures due to drought and lack of feed.

Gaby Maier, a University of California research and extension specialist in cattle health and production, described respiratory disease as a “huge problem in cattle,” especially the young. Cattle are most at risk when they’re stressed, such as when they’re being moved, and smoke worsens the problem, she added. Maier advised ranchers to work with their veterinarians to come up with a plan, to increase health checks on their animals, give them plenty of water and nutrition, and work them as little as possible.

“They’re pretty robust in general,” Maier said. “It’s not like every cow in California is now going to have respiratory disease. It depends on severity, but it definitely can impact their productivity.”

As for concerns about whether smoke and ash could potentially contaminate feed and drinking water, two UC studies that analyzed pasture and livestock drinking-water quality from the Camp Fire yielded results that “were unremarkable in terms of concerns,” said Tracy Schohr, UC Cooperative Extension livestock and natural resources advisor for Plumas, Sierra and Butte counties and a researcher in the studies.

Another UC study that involved feeding ashes from the fires to chickens to see if it would affect eggs also did not raise much concern, Maier said.

Mark Bolda, a UCCE strawberry farm advisor for Santa Cruz, Monterey and San Benito counties, said the amount of ash found on fruit so far in the region has been “light,” noting that berries are often shielded underneath the plant.

“What I do tell consumers is that the ash is mostly wood, so it’s not toxic by any means (and) doesn’t have any effect on the fruit,” he said.

Bolda said he has heard from farmers who say they’ve noticed yields have fallen because of the lack of sunlight from the smoke, but noted production generally drops near the end of summer.

Richard Smith, UCCE vegetable crop farm advisor for Monterey and Santa Cruz counties, said ash “hasn’t been too much of an issue” for vegetables such as head lettuce, the outer leaves of which are stripped, and other leafy greens such as spinach, which are washed after harvest. The one crop that’s been of some concern, he noted, is romaine lettuce, because its open head is more exposed to ash.

"Behind the Wines" concludes with "The Harvest Sessions"
October 25, 2020