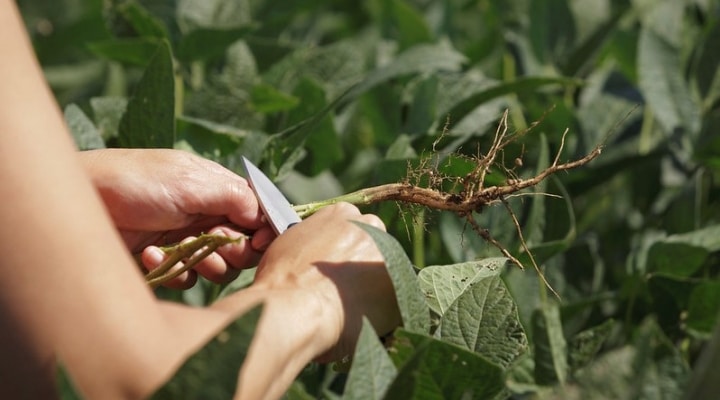 A group of scientists in China began a study of wild soybeans to find genetic regions involved with interacting with beneficial microbes that have been lost in domesticated soybeans. (United Soybean Board, Flickr/Creative Commons)

SAINT PAUL, Minn. — One of the top four crops grown worldwide, soybean has been an integral part of Chinese agriculture for a long time, having been domesticated more than 6000 years ago. During the domestication process, certain traits are selected that make plants easier to cultivate and cook and other traits can be lost. Wild ancestors of domesticated crops can be important reservoirs of agronomic traits that have been lost. This is especially important when it comes to disease resistance.

A group of scientists in China began a study of wild soybeans to find genetic regions involved with interacting with beneficial microbes that have been lost in domesticated soybeans. This group cultivated soybean lines that included small regions of DNA from their wild ancestors and found that some lines responded differently to different strains of the beneficial bacteria known as Sinorhizobium fredii.

These different responses, the scientists found, were related to whether or not the bacterial strains had fully functional type 3 secretion systems (T3SS), which are used by bacteria to inject protein effectors into plant cells. They followed a dirigent protein named DRR1 and found that it interacted genetically with the bacterial T3SS system to alter the number of nodules a root system forms.

This new genetic approach will help scientists access some of the genetic diversity of soybean ancestors to improve biological nitrogen fixation, an important part of sustainable agriculture, in modern soybean cultivars. For more information, read “RNA Sequencing-Associated Study Identifies GmDRR1 as Positively Regulating the Establishment of Symbiosis in Soybean,” published May 28, 2020 in the MPMI journal.