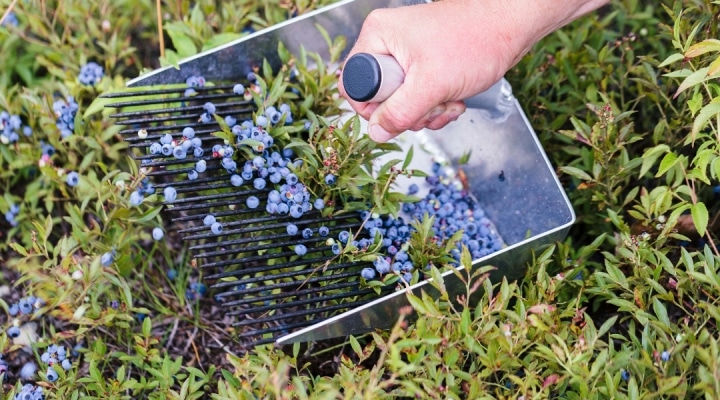 ORONO, Maine — Wild blueberry fields in Down East Maine are warming faster than the state as a whole, according to a new University of Maine study on the effects of climate change on the barrens over the past 40 years.

The difference in rising temperature rates suggests the need to develop specific wild blueberry management strategies, such as irrigation and fertilizer use, to mitigate the effects of climate change on Down East fields, rather than using tactics devised from statewide climate patterns, according to researchers.

Rafa Tasnim, a Ph.D. student of ecology and environmental sciences, led the study that explored changes in climate change patterns, particularly in temperature and precipitation, at Down East wild blueberry fields in the past 40 years of growing seasons from 1980-2019, then compared them to aggregate changes in climate measured for the entire state. Yongjiang Zhang, an assistant professor of applied plant physiology, and Francis Drummond, professor emeritus of insect ecology and pest management, collaborated on the study, the first to assess climate change patterns for a fruit spanning different fields in a single production region.

The team’s findings were published in a special issue of the research journal Water titled “Impacts of Climate Change on Plant Water Use, Carbon Balance, Nutrient Economy, and Their Interactions.” Their findings also revealed that rising temperatures at Down East wild blueberry fields fueled increased potential evapotranspiration, or water loss, over four decades, the continuation of which could threaten the water supply for crops and the low-water holding capacity of the soil in which the crops reside. The coupling effects of warming and increased potential evapotranspiration could hurt wild blueberry health and yield, according to researchers.

“Our findings clearly show that wild blueberry fields are not immune from climate change, so growers will need to be prepared for future warming and a predicted increase in water loss,” Zhang says. “Researchers will also need to develop new and innovative solutions to make this cultural heritage sustainable under a quickly changing climate.”

Most of the 18,000 hectares of wild blueberry fields in Maine reside in the Coastal Climate zone, which has been experiencing faster warming than the Interior and Northern climate zones.

The variation in climate across the three zones could result in wild blueberry fields experiencing the effects of climate change differently, according to Tasnim and her colleagues. The notion brings the efficacy of using statewide climate statistics in management practices into question, prompting the researchers’ study.

The team analyzed 40-years of annual data for maximum, minimum and average temperature and precipitation for 26 wild blueberry fields, two in Hancock County and 24 in Washington County, all at least one square kilometer in size. Researchers quantified climate patterns in their study area using remote sensing, Geographic Information System (GIS) techniques and various tools in ArcGIS Pro Software. When comparing it to statewide data, collected from the Climate Reanalyzer, the group found that average, minimum and maximum temperatures increased more in their study area than in Maine overall between 1980 and 2019.

The study also revealed differences in climate across the Down East fields themselves. The fields located closest to the coast had been warming the fastest and experiencing the lowest maximum and average temperatures and highest minimum temperatures.

Researchers discovered no changes in precipitation over the 40 growing seasons across the Down East wild blueberry fields or in the state overall.

The team established a positive correlation between temperature, evapotranspiration and crop health during their study. As temperatures continue rising, and therefore evapotranspiration, could result in more water deficits across wild blueberry fields, according to researchers. Remote sensing techniques that account for evapotrasnpiration can therefore help growers identify insufficient water supplies and evaluate the need for irrigation.

In their most recent study, Tasnim and her colleagues found that out of 26 Down East wild blueberry fields, more than half experienced temperatures exceeding the 25-degree-Celsius threshold from 1980-2019. Maximum temperatures for July and August, the peak of the growing season, have also surpassed 22.4 and 25 degrees Celsius.

The threats posed by climate change suggest the need for wild blueberry growers to consider mitigation efforts and irrigation and soil amendment techniques in their plans, according to researchers. The creation of predictive crop production models that factor in the temperature and evapotranspiration thresholds explored in their study would also help them manage their crops as the climate changes.

“In light of our recent studies regarding climate change and wild blueberries, starting from this summer under the supervision of Dr. Zhang, we are further going to investigate mitigation techniques for warming using biochar-compost mix and mulch in an experimental warming test in the wild blueberry field at the Blueberry Hill Farm owned by University of Maine for research,” Tasnim says.

–University of Maine
via EurekAlert!