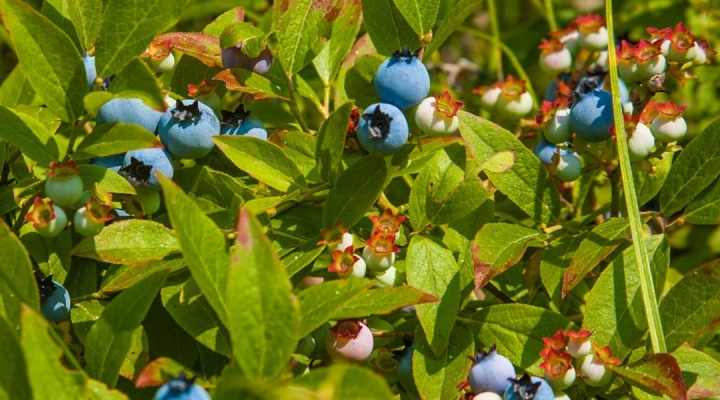 The growing season for these wild blueberries has extended later into the fall, and the average first frost has been pushed back to December. The longer season, however, exposes blueberries to a greater risk of frost damage because they develop and mature before the late and last spring frosts occur, researchers say. (Photo: Paul VanDerWerf, Flickr/Creative Commons)

ORONO, Maine — The location, season and the time of day influence how fast temperatures are rising at Maine wild blueberry fields due to climate change, according to a new University of Maine study.

To identify variations in climate across Maine wild blueberry fields at different times of the day and year, the research team led by Rafa Tasnim, a Ph.D. candidate in ecology and environmental sciences, analyzed annual and seasonal temperature, precipitation and snow cover data from 1980–2020 for Washington, Hancock, Piscataquis, Waldo, Knox, Lincoln, Kennebec and York counties. Understanding how warming patterns differ based on these factors can provide growers more targeted information about the possible effects of climate change on their fields, which allow for more tailored strategies to mitigate them.

Over 41 years, temperatures rose at a faster rate in the fall, winter and summer in all eight counties, but not in the spring, according to researchers. The growing season for these wild blueberries has extended later into the fall, and the average first frost has been pushed back to December. The longer season, however, exposes blueberries to a greater risk of frost damage because they develop and mature before the late and last spring frosts occur, researchers say.

Fields in Piscataquis and Washington counties are warming faster and experiencing longer growing seasons than other counties analyzed by researchers, although their average temperatures are not as high, according to study. The more eastern or closer to the coast the fields are, the faster they warm and the more at risk they are to frost damage.

Researchers found no notable differences in snow cover or precipitation, save a significant increase in the latter in Washington County, from 1980–2020 across the eight counties.

“I believe the outcomes from the analyses of this study have opened more room for further research to verify the responses of Maine’s beloved wild blueberries to the dramatic seasonal and spatial climatic changes that they are and will keep experiencing,” Tasnim says. “It would be vital and more beneficial for the growers if we research scientists can plan and recommend management strategies based on both the climate analyses that we have done as well as based on the wild blueberry plants’ specific responses.”

Other researchers involved in the study, which was published in the journal Atmosphere, include Yongjiang Zhang, an assistant professor of applied plant physiology; Lily Calderwood, University of Maine Cooperative Extension wild blueberry specialist and assistant professor of horticulture; Sean Birkel, Maine state climatologist and faculty member with the Climate Change Institute and UMaine Extension; and Samuel Roberts, an undergraduate student in the Ecology and Environmental Science program of the University of Maine.

It is “the first to access and report diurnal, seasonal, annual and spatial climate patterns for” Maine wild blueberry fields, they say.

The study builds on previous research from Tasnim and her faculty colleagues exploring the effects of climate change on wild blueberries. Earlier research revealed that fields in Down East are warming faster than those for Maine as a whole, and that proper soil moisture management is more important to helping wild blueberries thrive, especially in the long term, than previously thought.

Differences in warming based on location and time mean that some fields will benefit from rising temperatures some years and suffer during others, according to researchers. They recommend further investigations into how wild blueberries respond to experiencing warmer day and night temperatures, summers, falls and springs, as well as climate extremes.

“We showed different climate change patterns in different seasons and locations. Also, there is an increase in extreme climate events, so we need to study how wild blueberries will respond, and develop new management techniques to enhance the resilience of this crop and protect it from climatic changes,” says Zhang.

Timing is everything for weed management