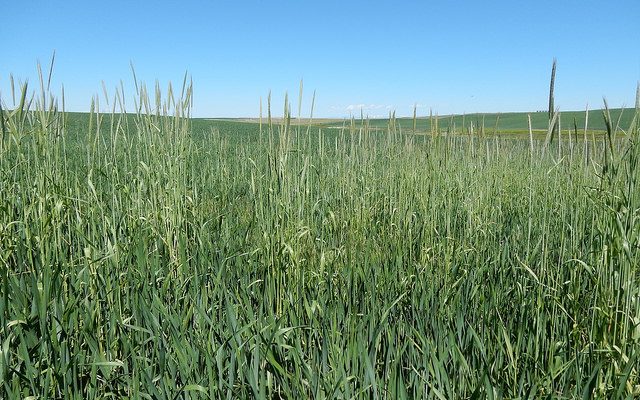 Rye is generally known as being unwieldy tall and prone to lodging. Yet this spring the crop appears to be extremely short with some of the earliest crop already heading while just being knee high. (Matt Lavin via Flickr)

MINNEAPOLIS — Rye is generally known as being unwieldy tall and prone to lodging. Yet this spring the crop appears to be extremely short with some of the earliest crop already heading while just being knee high. What gives?

The much shorter crop is an outflow of the very cool months of March and April.  The very late spring has resulted in very little (vegetative) regrowth this spring.  Now that spring finally has arrived, its photoperiod response in combination with high temperatures is forcing the rye crop to immediately transition to reproductive growth, resulting in a very short crop.

What is photoperiod sensitivity?  Photoperiod sensitivity is an evolutionary adaptation to avoid adverse conditions.  Flowering plants use photoreceptor proteins to sense changes in night length rather day length and use this information to transition from vegetative to reproductive growth, i.e. flower. Long-day plants flower when the night length falls below their critical photoperiod.

The progenitors of modern wheat, barley, oats, and rye were all long-day plants.  This ensured that the crops would flower, set seed, and mature before (extreme) the summer heat and drought of the dessert or frost in the mountain plateaus in the centers of origin could threaten the viability of the next generation. Amongst the cereals, rye has probably the strongest photoperiod response, as it is most adapted to northern latitudes, where a strong photoperiod response is most advantageous.

If you are interested in learning more about rye production, including hybrid rye, I encourage you to attend one of the field days that will be held across the state this coming month. The first field day will be held next week Tuesday from 10:00 – 12:00 at Anthony Farms (42505 Co Rd 15, St Peter, MN) in collaboration with KWS.  The University of Minnesota’s Small Grains Summer Plot Tours stops near LeCenter and Kimball will include rye as well.  Details about those plot tours are forthcoming.

4 tips for healthy calves this spring and summer