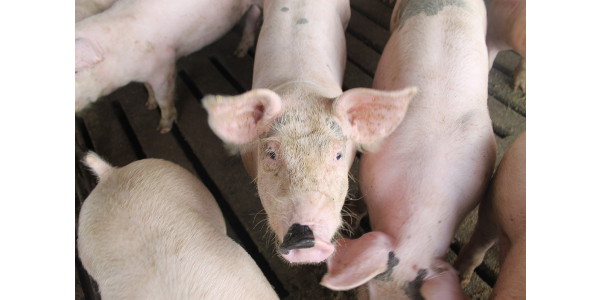 Large hog packing plants will only procure hogs of a specific size and quality.  Anything outside that they reject, and for mega-hog farmers, they cannot easily find other processors. (Courtesy of National Pork Board and the Pork Checkoff. Des Moines, IA USA. https://creativecommons.org/licenses/by-nc-nd/2.0/)

MARIBEL, Wis. — A New York Times article on May 14, 2020 noted that Iowa hog farmers are estimated to euthanize 600,000 hogs in the following six weeks while Minnesota farmers already had killed 90,000 hogs. For these farmers, this pencils out roughly to losses of $96.85 million and $14.53 million respective for Iowa and Minnesota hog farmers (at $57.65/cwt for a 280 lb. hog).  The National Pork Producers Association estimates that between April and September 2020 about 10 million hogs may have to be euthanized, a loss of $1.6 billion to farmers.

The reason?  The COVID-19 pandemic striking workers in meat packing plants has either reduced operations or temporarily shuttered them such that these hogs cannot be slaughtered, butchered, and shipped for meat that consumers were expected to acquire—a justifiable reason for shuttering these plants.  While at its peak, year on year processing was down by close to 45 percent of capacity; this has now narrowed to 20 percent as of May 18, 2020.

It is not that these hogs are no longer consumable as meat.  There exists a deeper and more concerning reason that should trouble the farmers who raise these hogs, the economic structure of the packing plants that process them, and the consumers that demand a certain type of product both from the grocers and the service providers.

Large hog packing plants will only procure hogs of a specific size and quality.  Anything outside that they reject, and for mega-hog farmers, they cannot easily find other processors.  Thus, hog farmers are unable to ship their pigs to these large plants once the pigs exceed the weight limit.  With contracts and other arrangements that farmers have in sourcing slaughter hogs for these plants, this means that if the plants cannot process the hogs at a specific time, these hog farmers must dispose of their over-weight livestock.  This is monumental waste!

Large packing plants of major processors are set up to operate most efficiently with little waste with a fixed infrastructure and through robotic cutting, specialized worker operations, and packaging in order to garner the highest profit.  They also contract with service providers such as restaurants, cafeterias, etc. and with grocers that only want cuts of specific sizes and forms that the consumer demands on average.  Packer profitability and consumers’ narrow demand are driving this waste.

This shortage of slaughter has generated higher prices for the consumer, more profit for the packers, and losses for the hog farmer.  While the July futures’ markets may show a live hog price of $57.65/cwt, the actual USDA daily carcass price for cornbelt hog packers had a weighted average of $37.85/cwt and nationally was $36.90/cwt, while the national live weighted average price was $30.02/cwt.  Nevertheless, the weekly primal loin value was $160.69.  This spread indicates the hog farmers are effectively subsidizing at their loss the enlarged profit of the packers and the consumers are paying inflated market prices due to irrational demand.

We should question why these packers are unwilling or incapable of adapting their operations, even on a temporary basis, to process these overweight hogs.  We should also raise the consciousness of the consumer to restrict their purchases of only specific product characteristics.  Years ago when we farmers did our own butchering, we took every part of the animal and put it to some use, no matter the size of the animal or the size of the cut.

While we as farmers are partially responsible for over-production of not only livestock, but grain, dairy, etc., we should address the processing structure also.  For example, Smithfield Foods, owned by WH Group and the world’s largest pork processor, is vertically integrated in the US and raises and owns 50 percent of the hogs that it processes in the US. Smithfield, JBS, and Tyson (IBP) have the capacity to process daily 304,600 hogs (60 percent of total US processing) at 22 different plants.  44 other companies have capacity to process the remaining 40 percent (202,000 hogs) at 46 plants, and of these 14 are primarily handling only cull sows for sausage.  This is a concentrated industry which deters competition and effectively sets the terms of purchase.  Both farmers and consumers should find ways to break up these oligopolies for the benefit of the producer and consumer.

Different than cattle where only 10 percent is exported, more than 20 percent of US domestic pork production is exported: 26.9 percent in the 2019 market.  We find the same concentration issue here that Congress and the Department of Justice have failed to correct.

The media is also reporting that many farmers are experiencing emotional and mental trauma with having to euthanize so many animals in a single day.  Representatives of these farmers are calling for mental health support to assist farmers.  But, that cannot be different than the psychological effect for workers on the kill floor who must deal with this experience every day.  Effectively for society, these workers are considered “disposable persons.”

We will not avoid these problems in the future until we directly confront the structural problem of the packing industry, the concentration of both packers and increasing economy of scale in farming, and the unadaptable demand of consumers.

Michael Slattery is a diversified grain farmer from Maribel, WI. He is a member of Wisconsin Farmers Union.