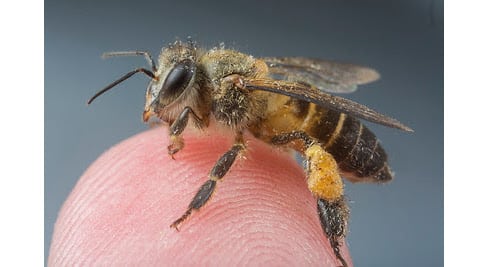 While Eastern honey bees do have a defense against Asian giant hornets, importing them into the United States would do more harm than good. (budak, Flickr/Creative Commons)

OLYMPIA, Wash. — While Eastern honey bees do have a defense against Asian giant hornets, importing them into the United States would do more harm than good.

The western honey bee, which is native to Europe, Africa, and western and central Asia, has been widely adopted because of its ability to produce higher honey yields than A. cerana. Other factors that make A. cerana difficult to manage for large-scale commercial pollination and honey production include seasonal migration, and a tendency to “abscond” (abandon their hive) when disturbed.

There are other reasons to be wary of importing Apis cerana. Although Apis cerana has effective behavioral defenses against the Asian giant hornet, it is also host to multiple parasitic mites that can destroy colonies of A. mellifera. One of these, Tropilaelaps clareae, has not yet reached Europe or the Americas. Many entomologists believe that Tropilaelaps could be more devastating to U.S. honey bees than the Varroa mite, and annual nationwide monitoring of U.S. honey bee populations to prevent the establishment of this parasite is a high priority of USDA-APHIS.

Importing A. cerana might also provide a pathway for bee viruses to enter the U.S., creating a high risk to both managed Apis mellifera populations and native bee species. Finally, Apis cerana itself could be problematic. After being introduced to Australia and Papua New Guinea, it became highly invasive and displaced native bee species. All efforts to suppress it have so far failed.

Intentionally introducing A. cerana would pose a huge risk to U.S. agriculture and native bees, and is not currently a viable solution to managing Asian giant hornets even if they become established. It is also illegal under federal law.

As a final note, remember that beekeepers still raise western honey bees in places where Asian giant hornet is native. It takes more resources, but the industry is viable.