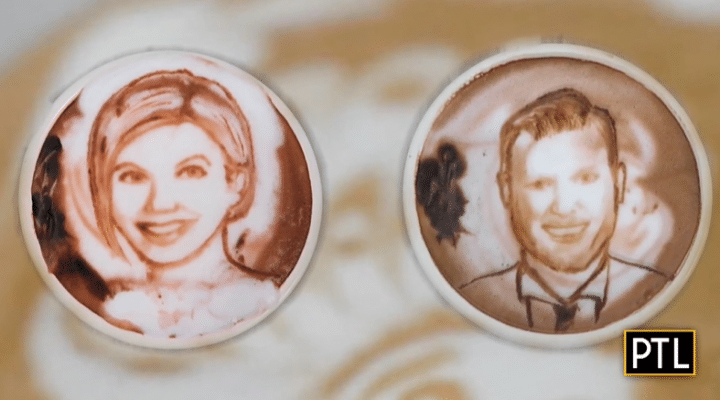 KDKA Pittsburgh news anchors Heather Abraham and David Highfield’s images were created in the cream of a latte during a news segment developed by American Dairy Association North East celebrating the use of whole milk in lattes on National Coffee Day. (Courtesy Photo)

Why, you ask? Because more than half of all Americans drink coffee everyday – with more and more consumers choosing lattes that usually consist of one-third espresso and two-thirds milk with a creamy foam on top.

“Consumers are on board with the coffee, latte and whole milk trends which is good news for dairy farmers because it translates to more milk sold,” said ADA North East CEO Rick Naczi. “We created five entertaining media segments about latte art to bring even more attention to dairy’s place in consumers’ everyday lives.”

To take advantage of the growing consumer coffee drinking trends, national dairy checkoff Dairy Management Inc. worked with long-term power partner, McDonald’s, to expand its McCafe coffee options in 2017. DMI’s on-site dairy scientists were involved in developing the new specialty coffee formulations – 95 percent of which contain dairy – and which use whole milk as the default milk.

Perhaps even more important, partners like McDonald’s are category leaders that capture the attention of their competitors. Their actions are often followed by others, creating a “catalytic effect.” When McDonald’s started offering other specialty drinks like lattes, other food chains followed with no additional investment from dairy checkoff.