Subscribe
Home / California / Where there is fire, is there smoke flavor in winegrapes? 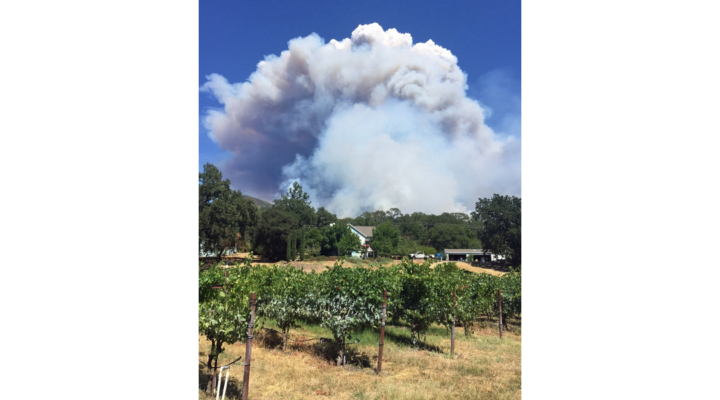 The 2018 River Fire started about 60 feet from Glenn McGourty's home, but the wind blew smoke away from his grapes. (Photo by Glenn McGourty)

MENDOCINO CO., Calif. — By the time the Mendocino Complex Fires were officially contained on Oct. 4, 2018, five weeks after igniting, they had burned approximately 450,000 acres in Colusa, Lake, Glenn and Mendocino counties, making it the largest wildfire in California history, according to CAL FIRE.

The fire not only destroyed 280 homes and other buildings, its smoke destroyed the market for winegrapes grown in vineyards near burned areas.

Fearing grapes near the fire would impart smoke flavors to the wine, some wineries rejected all fruit from nearby regions of Lake County and Potter Valley, leaving grape growers to hastily find new destinations for their 2018 crop.

“It can be difficult to determine if fruit has been compromised in quality when exposed to wildfire smoke, and whether or not smoke flavors will result in wine when fermented,” said Glenn McGourty, UC Cooperative Extension advisor in Mendocino County.

A new UC Cooperative Extension study shows wind direction and speed, temperature and a vineyard’s proximity to an active fire are factors that can help growers and winemakers predict smoke damage to fruit.

“Fruit in my own vineyard, 60 feet across the street from where the fire started, had no smoke damage because the wind was blowing away from it,” McGourty said.

Due to the Mendocino Complex Fires, an estimated $41 million worth of winegrapes, which would have been sold at full price, were impacted – some were sold at a discount, some were sold to other customers, some were custom crushed, while some were left hanging in the vineyard, according to the Lake County Winegrape Commission and Mendocino County Farm Bureau.

The wine industry needed a scientific method of determining whether grapes could be made into a wine untainted by smoke. With funding from the Lake County Winegrape Commission, McGourty formed a workgroup of local growers and winemakers with Anita Olberholster, UC Cooperative Extension enology specialist in the Department of Viticulture & Enology at UC Davis, to research when fruit quality has been compromised.

“The need for industry standards regarding the impact of wildland smoke on winegrapes and the resulting wines has become even more pressing over the past few years,” said Debra Sommerfield, president of the Lake County Winegrape Commission.

Science showed the intensity, duration and timing of the exposure to wildfire smoke affects the grape’s uptake. Generally, the closer to harvest, the greater risk to the fruit.

“Both the fruit and wine samples in our study showed a wide range of volatile phenol and glycocide concentrations, indicating that smoke damage to fruit was not uniform across the vineyards sampled,” McGourty said.

Fresh smoke contains volatile phenols and glycosides that can affect fruit, but these chemicals tend to dissipate in the atmosphere in 1 to 2 hours. Vineyards close to actively burning fires and in the path of fresh smoke are most likely to be affected by smoke taint. Smoke that travels long distances is less likely to affect grapes and the wine made from the fruit.

The combination of volatile phenols and glycosides create “smoke taint” – both aromatic and tactile in the mouth. Wine drinkers may smell smoke or other off flavors and experience a drying of their mouth when high concentrations of the chemicals are present in wine.

“At lower concentrations, smoke taint reminds you of brett-affected wines,” Oberholster explained, referring to the yeast brettanomyces. “There is a shortness of fruit, a kind of dryness in the mouth that you know isn’t normal. There may be barely perceptible aromas that aren’t normal as well.”

The scientists took cabernet sauvignon grape samples from each vineyard to a local lab to be analyzed for guaiacol and 4-methyl guaiacol, then made 27 small batches of wine from the samples. The cabernet sauvignon wine samples were sent to the Australian Wine Research Institute, which analyzed the wine for volatile phenols and glycoside compounds.

“The volatile phenols guaiacol and 4-methyl guaiacol are detected in the fruit by gas chromatography, so it is possible to sample fruit before harvest to make picking decisions,” McGourty said. “Based on our study, berry sampling and guaiacol/ 4-methyl guaiacol analysis are useful for a quick evaluation of whether or not fruit from a particular vineyard may have the presence of volatile phenols that can potentially result in smoke-affected wine.”

Testing the fruit for volatile phenols and glycosides is both expensive and not completely predictive as standards are not well defined for damage based on smoke chemical concentration, he cautioned.

These two compounds aren’t the only ones that cause smoke flavors. More than 70 other compounds in forest fire smoke can also produce undesirable flavors and odors described as “like licking an ash tray, burnt garbage, a burnt potato, a campfire that has been drenched with water.”

To assess the levels of the compounds that produce the off-flavors, Oberholster convened a panel of 14 wine industry professionals to taste the sample wines. The wine tasters detected stronger off-flavors in the wines made from riper fruit, which also contained higher concentration of smoke compounds. Less than 6 micrograms per liter of the smoke compounds were difficult for the tasters to detect, leading the researchers to conclude they will have a minimal effect on wine quality.

Smoke from a distant fire

The scientists also looked at the influence of distance from the fire and elevation on smoke taint. They found some vineyards close to the edge of fires and immediately downwind were heavily affected, with the grapes containing high concentrations of the smoke flavor-causing compounds. But they determined elevation was not a factor in smoke flavors in wines.

Wind direction and speed, temperature and vineyard proximity to active fires are highly likely affect whether there will be smoke damage to the fruit, their research showed.

“Smoke generated in the first one or two hours from a wildfire is most damaging to nearby vineyards,” McGourty said. “Even though a vineyard may be enveloped in smoke, if the source of the smoke is from a distant fire, it will probably won’t seriously damage the fruit quality because most of the volatile gases are gone.”

Lake County Winegrape Commission’s Sommerfield said, “Today, the results of this study are already proving to be useful in deepening our understanding of smoke and the risks it poses to grapes and wine, in enabling grape growers and winery buyers to engage in fruitful discussions and make informed decisions, and, in turn, in helping to propel the development of industry standards and protocols.”

To read more about the study by McGourty, Michael I. Jones, Oberholster and Ryan Keiffer, see the January 2020 edition of Wine Business Monthly at https://www.winebusiness.com/wbm.

“This is a great little study, the first one that I know of that takes a systems approach to evaluating the effects of wildfire smoke,” said McGourty.