Subscribe
Home / Missouri / Where the river meets the rows 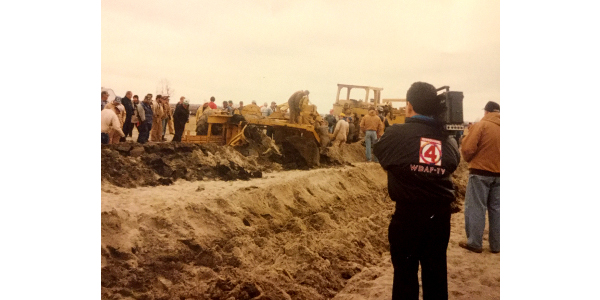 After the 1993 flood, MU Extension and other agencies sponsored a demonstration of a Post plow on land where Mike and Brian Strider farm. The plow turned up soil to mix with sand deposits left by floodwaters. (Photo courtesy of Willie Aholt)

HARDIN, Mo. — Soybean wait to be harvested where University of Missouri Extension held a demonstration in 1993 to show farmers how to renovate flooded fields with deep plowing.

Father and son Mike and Brian Strider farm the land. Brian is the fourth generation of Strider to farm the fertile bottomland of Crooked River, a meandering tributary of the Missouri River at Hardin.

The Striders are no strangers to high yields, high risks or high water.

Floodwaters have receded in Hardin. Some fields remain muddy. The Striders had more than 620 acres that lay fallow this year. Of those, 250 were planted, but flood drowned out the crop.

Corn grew well in some fields, with yields ranging from 28 to 170 bushels per acre. Even as rain falls again, the Striders are hopeful they can combine soybean in a week. Muddy fields will get nitrogen when the ground freezes. Levee repairs are underway.

Signs of the 1993 flood remain in this Ray County town of 569 people, although the signs are less evident to out-of-towners. The town gained brief notoriety in 1993 when floodwaters ravaged the town’s cemetery.

Today, tombstones in the cemetery stand watch over fields that flooded again this year. Twenty-six years ago, 793 of the cemetery’s 1,576 coffins washed down the Missouri River when levees broke.

Mike recalls the heartbreak of standing on a bridge with other farmers as caskets, farm equipment and roofs of buildings floated down the river. His father, a cemetery board member, worked with the county coroner and funeral directors association to recover most remains.

Brian points to a swimming hole where teens flock on hot summer nights. In reality, it is a sinkhole eroded by raging floodwaters. When crops grow, they hide sinkholes and scoured ridges, all reminders of violent moving waters.

Some sand remains in fields. It feels spongy when walked on. Today, farmers consider it some of Missouri’s best farmland.

Deep plowing restored it after flooding in 1993, says University of Missouri Extension soybean specialist Bill Wiebold. The Striders leveled sand deposits with a D6 bulldozer. Then Aholt & Sons excavating company of Augusta, Mo., deep plowed the land with a 15-ton Post plow. MU Extension and the USDA Soil Conservation Service sponsored a demonstration in a field near Crooked River.

Plowing cost $560 per acre, says Willie Aholt, a former owner of the plow. At one acre per hour, it was a tedious process. Tractors often sunk in sand. The hitch broke on the first day of the demonstration and welders worked all night to fix the plow in time for day two of the show.

The big plow dug 5-6 feet deep through sand and a hardened layer of blue-black muck to churn up soil.

The Striders say costs for plowing, leveling and cleaning ran about $1,000 per acre. Farm government programs covered about $400 per acre. Most farmers did not have federal crop insurance then.

Deep plowing, followed by careful tillage and good nutrient management in years to follow, restored most land. The Striders hauled sand and pea rock from farm fields to fill sinkholes. “We hauled sand for a month and we never hit dirt,” says Brian.

Some land remained barren for years. Some land never recovered. “You’ll spend every dollar you made and you’ll never get a crop off of it,” says Mike. Brian puts it another way: “You couldn’t raise hell on some of this ground with a quart of whiskey.”

But the Striders found alfalfa and sand do not mix when feeding animals. Rain splashed gritty sand onto leaves and stems. Sand grains ground away at animals’ teeth.

This year’s flood is less severe, in large part due to fewer breached levees. Heavy spring rains and snowmelt swelled to break more than 60 levees in Missouri and Kansas. Flood headwaters where levees break cause the most damage. That’s where the force is strongest and raging waters dump sand. “It sounds like a train idling” after a levee break, says Brian.

The Striders and their neighbors worked years with levee districts to build a stronger system. Voters approved taxes for levees and pumping stations.

Three levee districts in Ray County protect more than 43,000 acres of land. This year, every levy district from Sugar Tree Township to Crooked River will combine.

Technology changed how rural residents responded to floodwaters this time, says Brian. Cellphones and social media allow rapid deployment of volunteers to sandbag and move farm equipment and livestock to higher ground. In March, an assembly line of workers filled 4,300 sandbags an hour. They loaded them onto all-terrain vehicles to take to levees.

Brian recalls sandbagging for about four days in 1993. He and others hauled sandbags on a John Deere 4020 tractor. Three feet of sand covered blacktop roads after the 1993 flood, forcing farmers to drive machinery through water to reach dry fields to plant.

While 2019 flooding in Hardin was less severe than 2011 and 1993, lingering floodwaters increased erosion and nutrient loss on the Striders’ fallow acres. They are not alone. Missouri ranks fourth in the nation in prevented planting acres, according to USDA’s Farm Service Agency.

Much work looms before next planting season. Deposits of logs, fuel tanks, roofs and equipment need to be removed. Seep water continues.

MU Extension soybean specialist Wiebold recommends inoculating soybean seed after a flood. Use rhizobium bacteria to fix nitrogen on the first crop after a flood.

Crop insurance and federal disaster relief will help this time. However, the Striders scratched their heads in August on how to bring their insurance agent to look at fields that they could not drive to because of floodwaters covering roads.

Brian, a 1999 graduate of Northwest Missouri State University at Maryville, holds an agricultural science degree. He always planned to return to the farm.

His dad plans to turn over the farm to Brian this year.

It is not how he wanted to end his farming career.

About the Missouri River and its levees

According to the U.S. Army Corps of Engineers, the 2019 Missouri River basin water levels are the second highest ever.

The corps controls less than 15% of the nation’s levees. The rest are under state, local and tribal jurisdiction. In Missouri, there are an estimated 1,926 miles of levees.

The Missouri River, the longest river in the United States, begins in Montana and meanders through 10 states before flowing into the Mississippi River near St. Charles.

“Tips on getting rid of flood debris,” http://extension.missouri.edu/n/4113(opens in new window).