Home / Florida / Where does hay fit into the calf diet? 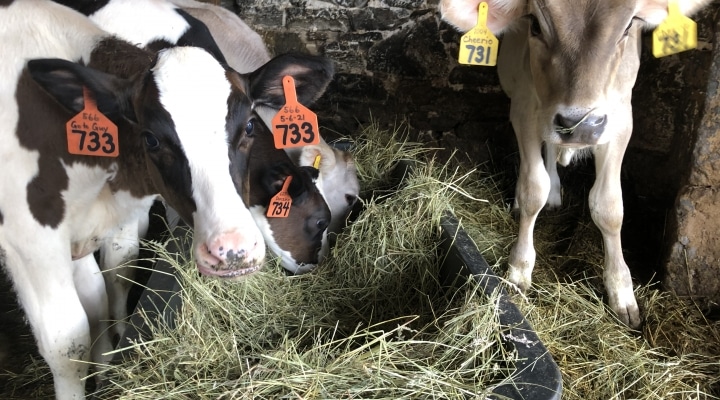 One of the common questions when it comes to raising dairy calves has always been, should hay be included into the diet for dairy calves? There have been many research trials over the years to try and determine the benefits or deterrents of such a decision. Farmers, nutritionists, and researchers all have their own opinions on offering hay (photo provided)

CHAMBERSBURG, Pa. — One of the common questions when it comes to raising dairy calves has always been, should hay be included into the diet for dairy calves? There have been many research trials over the years to try and determine the benefits or deterrents of such a decision. Farmers, nutritionists, and researchers all have their own opinions on offering hay. The best answer is simply, it depends! That’s right, it depends on the age of the calf, stage of rumen development, how much milk is being fed, what kind of starter grain is being fed, are calves housed individually or in a group setting, what is the nutritional quality of the hay, what is the weaning process for calves, and more. So yes, the best answer for each farm is going to be, it depends.

One of the biggest arguments for requiring hay is the end-product of its digestion. As the calf grows, rumen development is critical for future health and success. Proper rumen development is achieved with the growth of papillae on the rumen wall. Papillae enable the absorption of nutrients which can be utilized by the calf. Papillae development is stimulated by the end products of microbial fermentation, specifically butyric acid and, to a lesser extent, propionic acid (Jones and Heinrichs, 2017). The digestion of calf starter results in the production of butyric acid, and a small amount of propionic acid, those essential volatile fatty acids (VFA’s) for papillae development. When hay is digested, the result is mainly acetic acid and some propionic acid. Unlike butyric, which is used by the rumen wall, acetic acid is passed through the rumen and utilized by the calf for energy. Therefore, one of the leading arguments against feeding hay has been that the digestive benefits of grain far exceed that of hay, especially when focusing on rumen development. The widely used illustration of rumens from calves that were fed all milk, milk and grain, or milk and hay clearly shows the papillae growth when fed grain.

Comparison of rumen papillae development at 6 weeks in calves fed milk only (A), milk and grain (B), or milk and hay (C). Note the marked differences in papillae length and color. Source: Penn State Extension

A second argument for feeding hay revolves around the type of starter that is being fed. While there are limited studies comparing which is best, if starters are fresh, free from dust or mold, and are readily available, calves tend to do well on either kind. However, particle size of starter ingredients plays a key role in whether hay is necessary. To form a calf pellet, very small particle sizes of grains are used and bound together. The smaller the particle size of starter ingredients, the faster the starch will ferment in the rumen, resulting in ruminal acidosis. Incorporating hay into a diet like this will help to buffer the rumen, slowing the rate of digestion. Starch is more readily available in pelleted starters because of the manufacturing process. However, in textured starters, calves must chew the ingredients to break down the available starch. Calves eating texturized starter will be at a lower risk for acidosis and can be on a non-forage diet for a longer period than calves fed a pelleted starter (Jones and Heinrichs, 2017). Therefore, if calf starters consist of small particles, including too many fines because of sorting, hay should be included into the calf diet to prevent acidosis.

In a 2019 study published in the Journal of Dairy Science, researchers studied calves that were offered either a textured starter and chopped hay separately or a starter mixed with the chopped hay. In the preweaning phase, there were no differences in intakes or average daily gains (ADG’s). Similar results were seen at weaning, with the only difference being calves on the hay and grain mix experienced a decrease in feed efficiency. However, during the post weaning phase, calves consuming the hay and grain mix experienced decreased dry matter intake as well as lower average daily gains. Engelking et al (2019) concluded that because calves eating the starter mixed with hay consumed more hay because their ration was a mixture, rather than a choice. This resulted in quicker gut fill and calves feeling full, thus decreasing intake amounts and subsequently gains. Also post weaning, the calves that could choose between grain and hay consumed more grain than they did hay. It was hypothesized that as the milk source was removed from the diet, calves were choosing to fill that nutritional void by consuming a more energy rich source in the calf grain. The group of calves on the mix ration tried to consume higher amounts of grain as well, however because the hay was mixed in the ration, it was accidently consumed while trying to find more grain particles. Therefore, if hay is going to be included in the ration for calves, it is important to provide it separately from the calf starter, so calves are not limited in grain intake as their nutritional sources change.

Research done at the University of Florida focused on the behavioral development and performance of group-housed dairy calves when offered hay. Horvath and Miller-Cushon (2019) studied groups of calves on automated calf feeders being fed a pelleted starter. Some groups were offered a low-quality chopped grass hay as a separate source of feed. Feed intakes and calf weights were measured regularly, along with monitoring behavior trends. The results of the study showed an increase in smaller, more frequent feeding bouts in the groups of calves being offered hay. There were also fewer unrewarded trips to the automated feeders in the hay groups, indicating that calves were more satisfied than those not eating hay. Calves in the hay groups also showed less pen-directed sucking during the weaning period, meaning they possibly redirected their oral behavior from sucking on pen fixtures or pen mates to spending time consuming hay. The research used a low-quality hay to provide a sensory experience more so than offering a more appealing high-quality hay that would encourage intakes and create gut fill in the calves, limiting starter intake.

Because there are so many factors that can be weighed against each other, incorporating hay into the diets of dairy calves can be a hard decision. There are clearly arguments for either side of the debate. Therefore, the decision must be made based on the management practices of the calf and heifer program for the specific farm. Should hay be fed to your calves, well it depends. For more information or questions, contact Cassie Yost at 717-263-9226 or by email at clm275@psu.edu.