Home » Where and how to grow cellulosic biofuel crops 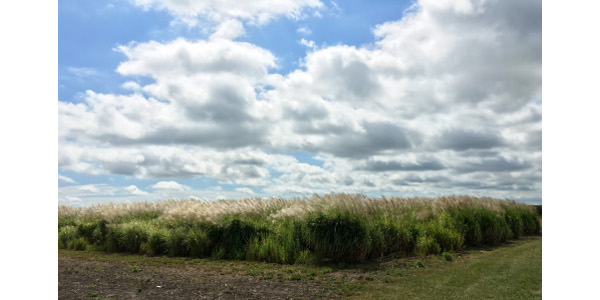 URBANA, Ill. — According to a recent ruling by the United States Environmental Protection Agency, 288 million gallons of cellulosic biofuel must be blended into the U.S. gasoline supply in 2018. Although this figure is down slightly from last year, the industry is still growing at a modest pace. However, until now, producers have had to rely on incomplete information and unrealistic, small-scale studies in guiding their decisions about which feedstocks to grow, and where. A new multi-institution report provides practical agronomic data for five cellulosic feedstocks, which could improve adoption and increase production across the country.

“Early yield estimates were based on data from small research plots, but they weren’t realistic. Our main goal with this project was to determine whether these species could be viable crops when grown on the farm scale,” says D.K. Lee, associate professor in the Department of Crop Sciences at the University of Illinois and leader of the prairie mixture portion of the study.

The project, backed by the U.S. Department of Energy and the Sun Grant Initiative, began in 2008 and includes researchers from 26 institutions. Together, they evaluated the bioenergy potential of switchgrass, Miscanthus, sorghum, energycane, and prairie mixtures in long-term trials spanning a wide geographical area. Due to shortages in plant materials, Miscanthus and energycane were grown on smaller plots than the other crops, but researchers say the new results are still valuable for producers.

“Although making real-world decisions and recommendations based on performance data from small plots is less desirable than from field-scale plots, we feel comfortable with the Miscanthus results since they were based on 33 data sets collected from five sites over seven years,” says Tom Voigt, professor in the crop sciences department at U of I and leader of the Miscanthus portion of the study.

Crops were grown for five to seven years in multiple locations and with varying levels of nitrogen fertilizer. Although most of the crops are known to tolerate poor soil quality, the researchers found that they all benefitted from at least some nitrogen. For example, Miscanthus did best with an application of 53.5 pounds per acre.

“When we didn’t fertilize with any nitrogen, yields dropped over time. But if we used too much, 107 pounds per acre, we were increasing nitrous oxide emissions and nitrate leaching,” says Voigt. “There is some need for fertilization, but it should be tailored to specific locations.”

Prairie mixtures, which were grown on land enrolled in the Conservation Reserve Program (CRP), also benefitted from added nitrogen. Yield kept increasing with the addition of up to 100 pounds per acre, but Lee says producers would have to weigh the yield benefit against the cost of the fertilizer.

“Even though it increased yield, it is economically not profitable to use more than 50 pounds of nitrogen per acre.”

And although most of the crops are somewhat drought-tolerant, precipitation made a difference.

“Miscanthus production was directly related to precipitation,” Voigt says. “In areas where precipitation was down, yields generally dropped. However, it did depend on timing. If there was a good amount of water in the winter, plants could get going pretty well in the spring. But if we had little rainfall after that, that hurt yields.”

Lee says prairie mixtures, which are normally made up of hardy grasses, suffered from the severe droughts in 2012 and 2013 in some locations. “In one year in our Oklahoma location, they didn’t even try to harvest. Yield was too low.”

No one feedstock “won” across the board. “It depends so much on location, nitrogen application rate, and year variability,” Voigt says. Instead of highlighting specific yields obtained in good years or locations, a group of statisticians within the research team used field-based yield and environmental data to create maps of yield potential for the five crops across the U.S. Dark green swaths on the maps represent areas of highest yield potential, between 8 and 10 tons per acre per year.

According to the new results, the greatest yield potentials for lowland switchgrass varieties are in the lower Mississippi valley and the Gulf coast states, whereas Miscanthus and prairie mixture yields are likely to be greatest in the upper Midwest.

Lee says the prairie mixtures, which are typically grown on CRP land to conserve soil, didn’t live up to their potential in the study. “We know that there are higher-yielding switchgrass varieties today than were included in the CRP mixtures in the study. If we really want to use CRP for biomass production, we need to plant highly productive species. That will bump yield up a lot higher.

“One of the biggest concerns now is that CRP enrollment is shrinking. When we started, we had 36 million acres nationwide. Now we’re down to 26 million. Farmers feel they could make more money by using that land for row crops. We need to find some solution if we want to save the soil. Biomass could provide revenue for farmers, if they were allowed to harvest it,” Lee says.

Energycane could reach very high yields, but in a relatively limited portion of the country. However, the crop that shows the highest potential yields in the greatest number of locations is sorghum. The annual crop is highly adaptable to various conditions and might be easier for farmers to work with.

“It fits well in the traditional annual row-crop system; better than perennial crops. It may not be environmentally as desirable as perennial crops, but people could borrow money in winter to buy seed and supplies, then plant, and sell in the fall to pay back their loans. It’s the annual cycle that corn and beans are in,” Voigt says.

Lee adds, “In terms of management, sorghum is almost the same as corn. It germinates and grows so quickly, weed control is not a big issue. If you plant by early June, it will be 15-20 feet tall by September. It also has good drought tolerance.”

Downsides to the biomass champ? It’s wet at harvest and can’t be stored. It also requires nitrogen and can lodge, or collapse, prior to harvest in wet or windy conditions. “Still, it’s a really spectacular plant,” Voigt says.

The researchers made all the raw data from the study available online for anyone to access. Lee says it can be useful for everyone: scientists, policymakers, and producers. “It should be helpful for number of different stakeholders,” he says.

The article, “Biomass production of herbaceous energy crops in the United States: Field trial results and yield potential maps from the multiyear regional feedstock partnership,” is published in a special issue of GCB Bioenergy. The project was funded through the U.S. Department of Energy [award number DE-FC36-05GO85041] and the North Central Regional Sun Grant Center at South Dakota State University. 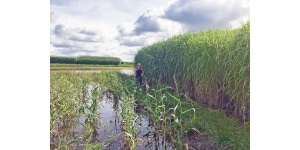