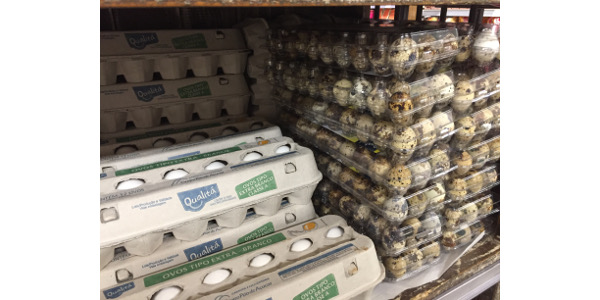 URBANA, Ill. — Tiny Japanese quail eggs are a small niche market in the United States, but they’re a big business in Brazil where they are sold fresh in grocery stores in egg cartons that hold 30 of the small, speckled delicacies, and are a hard-boiled staple on restaurant salad bars. Recent research from the University of Illinois helps Brazilian producers understand the birds’ behavior under wind and temperature variables and suggests environmental changes to boost their egg-laying productivity.

“A study like this one is an interesting collaborative effort between animal science and engineering,” says U of I researcher Richard Gates. “Animal scientists tend to think that nutrition and genetics are the primary drivers. Engineers are adamant that facilities and environment are the key. The reality is that it is the interaction of a lot of factors.”

Gates is a professor in the Department of Agricultural and Biological Engineering in the College of Agricultural, Consumer and Environmental Sciences at U of I. He says he does a lot of cross-disciplinary work. “I’m the ‘token’ engineer in a lot of different projects. Many projects are about the impact of the housing systems—the interior environment on welfare, behavior, productivity for various types of animals and the exterior environmental impacts.”

The study was prompted by an invitation from the manager of a large, hen laying operation in Brazil to tour the facilities of his more recent venture—quail production. On the visit, Gates found long, narrow poultry sheds situated like a trellised vineyard of buildings on the side of the mountain. Each building containing three rows of quail cages running lengthwise.

“Because it’s on the side of a mountain, there is a lot of wind,” Gates says. “The buildings are naturally ventilated with open side walls. Vinyl curtains can be pulled up to block extreme weather when needed. The manager noticed that when the wind hit the birds in cages on the outside perimeter, they saw big behavioral changes when compared with the birds on the inside row of cages that are more sheltered from the strongest wind. He asked us for help in understanding how wind and temperature affected the quail. He was noticing that when it was what we would consider to be a comfortable temperature, the quail were being cold stressed.”

For the study, six climate-controlled quail chambers were used on the Universidade Federal de Viçosa campus in Minas Gerais, Brazil. Each chamber contains an air conditioning system, a humidifier, a watering system for the quail, and a tube to create an air jet that simulates wind.

The air velocity ranged from still air, zero wind to 7 mph wind and the temperatures were 63, 73.4, 84, and 95 degrees Fahrenheit. The quails’ behaviors were observed under varying combinations of wind velocity and temperature that they would be subjected to under normal conditions.  The behaviors were described as 1) eating or drinking, 2) stopping, resting, or posturing, 3) opening wings, bristling, or other movements associated with the birds feeling hot or cold, and 4) any other behaviors, such as chasing each other, that don’t fit into one of the categories.

“Temperature and wind velocity affect how much the quails ate. When temperatures are higher, the quail ate less,” Gates says. “But it also turns out that sometimes wind is a good thing. One of the major observations is that when it’s hot and there is a breeze, more birds were observed eating. There isn’t a good way to control the temperature in these quail sheds. So, when it’s hot outside, it gets even hotter inside.  What this shows is that producers really need to come up with ways to take advantage of the wind—not just putting the curtain up and down—but find ways to get a breeze circulating to those inside rows of cages as well.

“We now know that if the birds are heat stressed, but air movement is provided, it helps them cope with the heat,” he adds. “When they’re happier, more comfortable, they’re going to eat more. And if they eat more, they maintain their egg production. That’s the balance that we’re after.”

In terms of cold temperatures, Gates says producers can close the curtains. “When we did the study, we find there is very little difference in the quails’ behavior at the colder temperatures.”

The study was conducted at a time when the quails’ egg production would be most sensitive, but Gates says the length of the study and the various wind and temperature changes weren’t long enough to reflect significant changes in their egg production.

The findings from this study, although conducted in Brazil, hold true for Japanese quail production anywhere in the world. “It provides baseline information for how we would expect quail to behave under very different environmental conditions,” Gates says.

Support for this research was provided by The Center for Research in Environmental and Agroindustry Systems Engineering (AMBIAGRO) of the Federal University of Viçosa (UFV) Department of Agricultural Engineering, the Coordination for the Improvement of Higher Education Personnel (Capes), and the National Council for Scientific and Technological Development (CNPq).