Home / DelMarVa / When is corn an alternative forage? 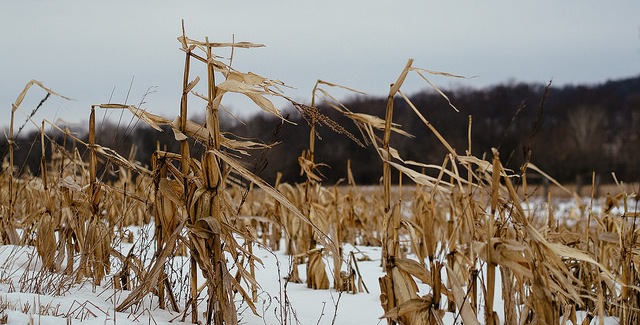 Unlike stockpiled fescue, cattle don’t have to dig through snow and ice to get the feed. Corn stands accessibly above the snow, holds up in windy conditions, and provides a windbreak for cattle. (Jereme Rauckman, Flickr/Creative Commons)

RONKS, Pa. — “Corn,” “diversity” and even “innovative cropping systems” usually don’t go together in the same sentence. When used in a stockpiled winter grazing system, it turns out they occasionally can.

Grazing standing corn is certainly not a new practice, but many farmers may not be sure of its fit within their operation. As with any other form of grazed feed, the advantages are clear — reduced or eliminated harvest, storage, processing and handling costs. If you stockpile the corn to graze into the winter, these benefits can be compounded, since it eliminates much of the time and expense of harvesting and storing a high-value feed. Cattle can also help eliminate the headache of volunteer corn by cleaning up stray kernels. Another added bonus: free manure deposition across the whole field.

Unlike stockpiled fescue, cattle don’t have to dig through snow and ice to get the feed. Corn stands accessibly above the snow, holds up in windy conditions and provides a windbreak for cattle. Leaving corn standing also delays deterioration of the whole plant. It’s preferable to graze in frozen conditions, though, because any plants that get trampled into the mud will be unusable.

Mature corn plants have higher feed quality than you might think. While the stover takes up a good amount of space, at least 60 percent of dry matter yield comes from the cob, grain and husk. The leaf, stalk and tassel comprise the other 40 percent or less. What the whole plant lacks in feed quality (depending how long it has been left out in the field and how dry it is) can be compensated to some extent with the energy-dense grain.

According to Dr. Sjoerd Duiker (“Planting Corn for Stockpiling”), a soil scientist at Penn State, mature corn can average about 8.5 percent crude protein and a TDN of 65.4 percent — falling well within the acceptable range for dry cows or mature bulls. Cows graze husks, ears and leaves first, generally leaving stalks standing, or grazing them last if they are kept confined to the area. Mature, non-lactating cows can potentially gain body condition under an appropriate stocking rate.

As far as dry matter yield, you can expect about what you would find if the hybrid were planted for silage (generally in the 7-12 ton range under mainstream conditions and depending on the relative maturity of the hybrid).

When selecting your corn, look for a silage hybrid with a relative maturity adapted for your area, a solid forage yield, high digestibility, lower fiber content, strong stalks and hanging ears, whose husks won’t catch and hold water.

Strip grazing the whole plant can be more efficient and less wasteful, while limiting and diluting cattle’s overall grain intake. When grain intake is lowered by forced roughage feeding, acidosis risk can be lessened. Cows should be moved at least once every three days at the right stocking rate, but if the field conditions are too wet, may need to be moved up to several times a day. Be sure to test the whole plant for feed quality, compare to cow requirements and supplement as necessary.

Maximize the System with an Interseeded Cover

Using interseeding equipment (such as Interseeder Technologies’ no-till grain drill) to establish a cover crop in standing corn is a practice that has gained some traction in recent years. Cover crops — usually small-seeded, shade-tolerant, cool season varieties — are drilled into corn at last cultivation time (V5-V6) to grow and succeed corn during the fall and winter. The major advantage to this practice is to work around short growing seasons by getting a cover crop established before the corn is harvested.

Used in a grazing corn system, interseeded cover crops have an additional advantage: they add to the whole feed picture when the cattle come in to graze. Now you have a lush green feed understory, high in protein and fiber digestibility, to complement the stover roughage and grain — coming closer to resembling a balanced ration. Especially if the corn is stockpiled, the interseeded crop has a chance to shine as the corn growing season wanes, plants start to die and the canopy opens up.

The cover crop roots also help loosen and “compaction-proof” the soil, adding organic matter that breaks up and holds soil aggregates. Soil compaction can be a very real threat in winter grazing settings, since ground is wetter and may not always be frozen. Excess soil moisture can be taken up and held by the cover crop

Annual ryegrass, red clover and various brassicas (especially Daikon radish) are among the shade-tolerant species that prove more successful in the interseeding context.

Interseeded cover crops give the additional advantage of season-long weed suppression that continues into the winter. An additional weed control measure is to delay seeding until after the first weed flush is sprayed with glyphosate. Heat units lost early in the corn growing season often aren’t as significant as the heat units corn accumulates once summer heat gets fully underway. You would be surprised how much corn can make up growth during mid to late summer.

If you plan to stockpile, be on the lookout for any johnsongrass or shattercane weeds, which can be a source of prussic acid after frost, as with any sorghum crop. Prussic acid is toxic to cattle.

It’s a good idea to feed some alfalfa-grass hay right before moving cows onto a new section of corn. High quality grass-legume hay has a very different nutritional profile than the tough stalks and starchy grain that make up a corn plant, including more rumen-degradable protein and higher calcium levels. More rumen-degradable protein in the diet means the cow can make better use of the corn stalk roughage, by providing the gut microbes with enough fuel to attack and break down the higher-lignin feed.

Even though cows have access to the whole plant, they will select ears first, so keep an eye out for symptoms of grain overload and acidosis. This is especially true if you are grazing plants with fully developed cobs. The right stocking rate and the feed you supplement will make all the difference. And have a backup feeding plan in years with bad weather or excess snow.

Forage Conference to be held December 8 in Newton, Kan.
December 1, 2021