Home » When does rock become soil? 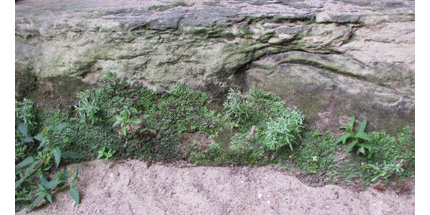 The sandstone, top layer, is weathered by climate, organisms and time. Lichen - a mixture of fungi and bacteria - help break the rock down. Eventually plants can grow in the space, adding organic matter as they grow and die. (Photo: SVFisk)

“Rock starts becoming soil the moment it is exposed to the environment,” says soil scientist Barbara-Ann G. Lewis. “But it’s a long transformation process from exposed rock to a mature soil. Depending on the nature of the rock and other factors in its surroundings, that time period can range between tens to tens of thousands of years!”

Soil scientists look at five major factors in the soil-forming process. These are climate (Cl), organisms (O), relief (R) or topography and drainage of the land, the rock or other parent (P) material that will become the soil, and how much time (T) has gone by.  These can be combined into a “recipe” for soil known as ClORPT.

“The processes of weathering and soil formation go on, not only on the surface, but also below the surface within the soil itself,” Lewis comments. “Human survival depends on it.”