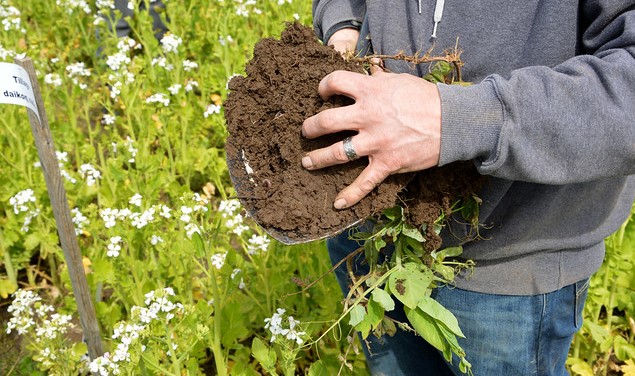 Because there is no one-size-fits-all answer to when cover crops start paying for themselves, Cover Crop Economics: Opportunities to Improve Your Bottom Line in Row Crops takes a holistic look at the question. (NRCS Oregon, Flickr/Creative Commons)

WASHINGTON — Farmers around the country are planting cover crops on millions of acres to protect and improve the soil, and the more that farmers use cover crops, the more they value this conservation practice. Cover Crop Economics, a new report published by USDA-SARE looks at the economics of cover crops to help farmers answer that big question: “When do cover crops pay?”

The key, says North Dakota farmer Justin Zahradka, who has been planting cover crops since 2011, is to “look at cover crops as an investment rather than a cost.”

Based primarily on yield and economic data gathered through five years of national cover crop surveys, Cover Crop Economics: Opportunities to Improve Your Bottom Line in Row Crops addresses the kinds of economic returns that can be expected from cover crops, both under various management scenarios and as cover crops improve soil health over time. The report is timely, as the latest Census of Agriculture revealed that national cover crop acreage increased by 50% from 2012 to 2017.  It’s also timely due to the interest in cover crops for planting on fields that were flooded or otherwise unplanted (prevent plant situations) this spring, in order to suppress weeds while protecting and improving the soil.

“The five years of national cover crop surveys showed us that cover crops do improve commodity yields over time as farmers gain experience with cover crops and the soil is improved,” says lead author Rob Myers, of the University of Missouri and North Central SARE. “We saw this pattern in all five years of the survey for both corn and soybeans.”

Because there is no one-size-fits-all answer to when cover crops start paying for themselves, Cover Crop Economics: Opportunities to Improve Your Bottom Line in Row Crops takes a holistic look at the question. It explores seven common management situations for commodity farmers that can affect how quickly they receive a positive net return from cover crops. In reviewing national survey data and information from other studies and farmers experiences, the publication describes a number of situations in which cover crops may increase profitability within a year or two.

Prime examples of fast returns include when drought occurs when herbicide-resistant weeds are a challenge, or when cover crops are grazed. Other management situations which can speed up positive returns from cover crops include when a farmer is dealing with compacted soils or is transitioning to no-till, or when cover crops are contributing to a commodity crop’s nutrient needs. Also, receiving federal or state incentive payments while transitioning to cover crop use can make a major contribution to a quick economic return.

Some key findings from the report include (see the full report for details on the calculations and assumptions underlying these conclusions):

The findings in Cover Crop Economics: Opportunities to Improve Your Bottom Line in Row Crops are based on an analysis of five years of data from the National Cover Crop Survey, conducted by the Conservation Technology Information Center (CTIC) and SARE in the 2012-2016 growing seasons. This survey provides the largest multi-year data set on cover crop yield response that has ever been assembled, according to Myers, with about 500 farmers providing yield data in most years of the survey.

In 2015 and 2016, the survey captured more detailed data on yield response in a given field based on the number of years cover crops had been planted in it. In those years, average corn and soybean yield increases in response to covers were:

In the drought year of 2012, there was a significantly bigger yield boost from cover cropping on the majority of farms responding to the survey. Corn yields increased by 6% and soybeans by 11.4% after one year of cover crop use due to impacts on rainfall infiltration, reduced soil evaporation from cover crop residue, changes to soil biology such as increased mycorrhizal fungi, and potentially deeper rooting of cash crops.”

Other smaller studies on yield response to cover crops have found a variety of results, some showing modest yield increases and some showing no yield response. “I think yield response to covers depends on how the farmer or researcher manages the cover crop and the soil types they have, but clearly there have been a range of yield impacts reported,” says Myers. “As with other crop management practices, it takes planning to get the best results, and mistakes can lead to a yield loss, particularly if cereal rye is used before corn without adjustments to fertilizer practices or without appropriate termination timing.”

Experienced cover crop users often find ways to use them for less. One large Iowa farmer grows his own cereal rye seed and plants a bushel of rye per acre as a cover, according to Myers. He finds his cost for seed is $9 per acre and his cost of seeding is $5 per acre by using a high capacity fertilizer spreader to broadcast the rye seed, making a total of $14 per acre for seed and seeding. Others may keep the cost of seeding to a minimum by seeding cover crops with a vertical tillage tool they would be operating in any case. Some farmers have termination costs for cover crops, but many do not, as they are already applying a spring burn down herbicide.

Alan Weber, an ag economist who has used cover crops on his own farm and who co-authored Cover Crop Economics: Opportunities to Improve Your Bottom Line in Row Crops, says, “One of our key takeaways from the review we did of data and farmer approaches is that when farmers start to adopt cover crops, they frequently start to determine other ways to make their cropping system more economically efficient, finding they can save costs in certain areas such as fertility or weed control. For some farmers those cost savings from cover crops can be significant, particularly in certain situations with herbicide-resistant weeds. In other cases, those cost savings will be more minor, but the input savings generally increase over time. Some aspects of soil health respond quickly to cover crops, such as more earthworms and mycorrhiza, while other soil changes take longer.”

In the longer term, as aggregate soil structure starts to improve, cover crops in combination with no-till can allow farmers to get into the field a little earlier for planting or harvest in wet years, which can be another way that cover crops provide a positive economic impact. Several years of cover crop use can gradually start to improve soil organic matter, which can improve soil water-holding capacity and help improve the inherent fertility of the soil.

As a bottom line, Myers says, “Thousands of farmers are finding the profitability benefits of cover crops on their farm do improve over time. Depending on circumstances specific to each field and farm, cover crops may provide a relatively quick profit, such as from grazing, or may take 2-3 years to provide a return. It’s not unlike how applying ag lime can take 2-3 years to pay, or buying a new piece of equipment can take a few years to cash flow. However, if producers use cover crops to address problems specific to their farm, such as weeds, fertility, erosion, or compaction, they can quickly gain cost efficiencies with their commodity cash crops. The cover crops also provide a management tool to make soils more resilient to excessively dry or wet weather while building towards long-term improvements in profit.”

Download or order your free print copy of Cover Crop Economics: Opportunities to Improve Your Bottom Line in Row Crops at www.sare.org/cover-crop-economics or by calling (301) 779-1007. Print copies will be shipped in early July. Cover Crop Economics is available in quantity for free to educators for use in educational workshops, classes or tours.