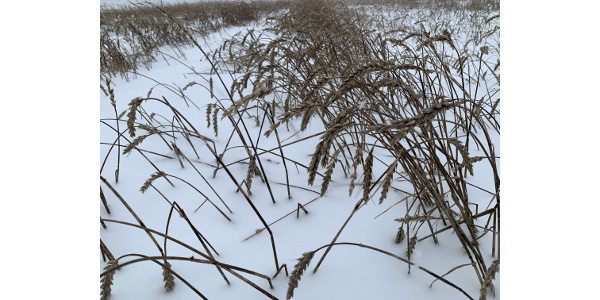 Snow has prevented wheat from being harvested in parts of North Dakota this fall. (NDSU photo)

FARGO, N.D. — Heavy rainfall or snow has prevented wheat from being harvested in parts of North Dakota this fall, leaving producers wondering what to do with their crops.

Vomitoxin is one of the concerning issues. Vomitoxin, also known as deoxynivalenol (DON), is a mycotoxin that occurs predominantly in grains such as wheat, barley, oats, rye and corn. High vomitoxin levels have been found in wheat throughout North Dakota. Levels have ranged from 1 to more than 20 parts per million (ppm).

Fields at greatest risk of high vomitoxin levels are susceptible varieties that were flowering during periods of high scab risk.

“The first thing to remember is that vomitoxin does not randomly occur in wheat; rather, it is the byproduct of the Fusarium fungus colonizing the wheat head and causing scab,” explains Andrew Friskop, North Dakota State University Extension plant pathologist.

“The infection event for Fusarium generally occurs during the flowering stages of wheat,” he adds. “As the Fusarium fungus colonizes the wheat spike, kernel development is inhibited and vomitoxin is produced. The vomitoxin is very heat stable and will remain in the kernels and plant parts.”

Will Vomitoxin Increase in Wheat Left in the Field?

The Fusarium fungus is on infected spikes and the levels could have increased when conditions (high humidity, temperatures of 70 to 80 F, prolonged periods of moisture) were favorable for Fusarium growth. However, experiments have shown that vomitoxin levels are lower after a single wetting event seven to 28 days after infection. University of Minnesota research has demonstrated that after applying 5.2 inches of rain in six hours, vomitoxin levels were reduced.

“This study was able to demonstrate the solubility of vomitoxin but difficult to apply to the field,” Friskop says. “The intensity of the rain used in the study is tough to replicate in a field in North Dakota, and this fall has had several wetting events (rain and snow) and extremes in temperatures. Therefore, I would keep reserved expectations that rain has reduced DON levels significantly.”

Is Seed With High Vomitoxin Levels OK to Use Next Year?

Saturated soil makes putting up wheat for hay or silage difficult or impossible.

“Grazing standing mature or ripening wheat is not a common practice; however, it is an alternative that some producers are considering,” says Miranda Meehan, NDSU Extension livestock environmental stewardship specialist. “Producers should keep in mind that grazing saturated soils may cause soil compaction, so delaying grazing until soil has dried or the ground has frozen is recommended.”

Wheat makes excellent livestock feed but ferments rapidly in the rumen, which greatly increases the potential for digestive issues such as acidosis, bloat and founder, according to Gerald Stokka, NDSU Extension veterinarian. This risk may be decreased slightly when grazing whole grain due to its fibrous material and a hard seed coat.

Much of the wheat has significant sprout damage, which will reduce but not eliminate the risk of acidosis significantly. If sprouts are visible on standing grain, much of the starch has been used as a food source that allowed the seedling to grow. Any remaining grain still could contribute to the potential for acidosis, but the overall starch level will be reduced significantly.

“This presents some challenges when thinking about a grazing situation where cattle would have potentially unlimited access to standing grain,” says Yuri Montanholi, NDSU Extension beef cattle specialist.

Some of the fields may have shelled out, but others may have significant grain remaining. The first step is to determine the amount of yield potential so producers know how much grain would be available to livestock. For more information on yield estimates, visit https://tinyurl.com/EstimatingWheatYield.

Strip grazing likely would be necessary in this situation as a way to limit grain intake. Once yield has been determined, producers can use that number to evaluate how many acres should be available to livestock on a daily basis. Strip grazing should be limited to no more than three days, with one to two days preferred, to reduce digestive issues, advises Kevin Sedivec, NDSU Extension rangeland management specialist.

Slowly adapting cattle to grain is extremely critical, says Janna Block, NDSU Extension livestock systems specialist at the Hettinger Research Extension Center. Producers first should offer only enough acreage for 1 to 2 pounds of grain per head per day, then gradually increase the amount available. Producers also should observe cattle carefully and use their judgment to adjust for individual situations based on field conditions and cattle performance and health.

Another potential issue producers should be aware of is awns on bearded wheat varieties, which could cause soreness and irritation to cattle’s mouth, lips, gums and lower surface of the tongue.

Ergot and nitrate are other issues of concern. Ergot is well adapted in the state, with a very large grass host range, including quackgrass, brome grass and small grains. Ergot has been reported in several areas of the state this year due to cool, wet conditions that support the pathogen.

Ergot bodies contain toxic ergopeptide alkaloids that have a higher toxicity in cattle, compared with vomitoxin. Ergot poisoning may result in tail and ear losses, lameness, loss of hooves and even abortions. The specialists recommend sampling grain and having it analyzed for ergot. Check out https://tinyurl.com/ErgotinSmallGrains for more information.

Although mature wheat is unlikely to have dangerous levels of nitrate, producers need to check fields for nitrate-accumulating weeds and grain regrowth. A Nitrate QuikTest can determine the presence or absence of nitrates prior to turning cattle out on a wheat field.

Also, insured wheat growers should check with their crop insurance agent regarding insurance requirements for documenting potential grain yield losses before harvesting a forage crop. Producers may be required to leave small areas of uncut wheat to provide a way to estimate grain yields for the insurance loss calculation. Insurance agents can inform producers of any other restrictions that may apply.