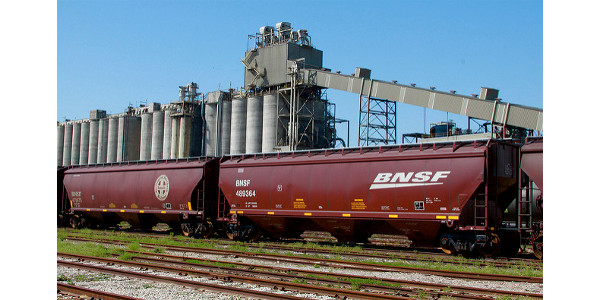 Grain export facilities along the Gulf coast suffered little damage from Hurricane Harvey, but the railroad tracks that move wheat to them were more damaged by the storm, said Jay O'Neil, agricultural economist for the International Grains Program at Kansas State University. (Roy Luck via Flickr)

Grain export facilities along the Gulf coast suffered little damage from Hurricane Harvey, but the railroad tracks that move wheat to them were more damaged by the storm, said Jay O’Neil, agricultural economist for the International Grains Program at Kansas State University.

Most rail lines have since been inspected and repaired, he said. The storm caused about a four-day stoppage, depending on the port. Some terminals had wheat on hand ready to load onto ships, while others had to wait for rail cars to come in.

Harvey struck Texas on Aug. 25 and heavy rain and flooding followed for days. The Agriculture Department reported Monday that for the week ending Sept. 7 zero wheat was inspected in southern Texas ports, while 82,474 metric tons were inspected at Mississippi River locations.

“Harvey was a considerable disruption to grain exports, Irma not so much because we load grain out of Texas and New Orleans,” O’Neil said.

The hurricane did not affect New Orleans ports, where grain mostly comes down the Mississippi River from Missouri and points east. But the Texas facilities where international exports are loaded onto ships receive their grain by rail from the major wheat producing states of Kansas, Nebraska, Oklahoma and Texas. Other states such as South Dakota and Colorado are also significant producers.

This time of year is also particularly busy for hard red winter wheat exports because it is after that the U.S. harvest.
“We’ve gotten some orders recently … for some wheat to go overseas and it is just unfortunate timing because wheat is so cheap. It is very competitive right now across the world — and if the customers learn there will be a significant delay they may choose another option,” said Aaron Harries, marketing director for the industry group Kansas Wheat.

Hard red winter wheat prices for export out of the Gulf coast are down about $100 a metric ton since 2012 to $180 a metric ton now, said Justin Gilpin, chief executive officer for Kansas Wheat. Cash prices for farmers are about $3.40 per bushel, down $3 per bushel from 2012.

Trains loaded with grain in the Midwest had to be held on track and couldn’t be moved to Texas until the railroads lifted their embargos, O’Neil said. The railroads — primarily the BNSF, Union Pacific and Kansas City Southern — had to access damage and make repairs to its bridges and tracks damaged by Harvey.

“There was a lot of concern in our industry that both because of the considerable track damage and because of the employee situation it could have been longer potentially … everybody was pretty surprised at the resiliency of both elevators and employees,” O’Neil said.