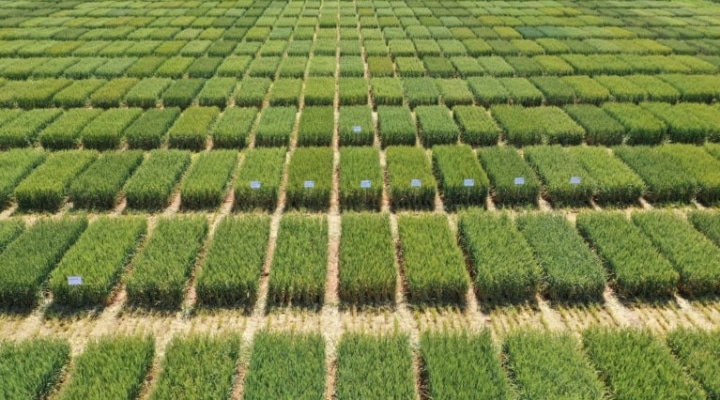 COLLEGE STATION, Texas — Texas A&M AgriLife wheat research and variety trials did not take a break during the COVID-19 pandemic. But it was not possible to conduct a traditional May wheat field tour, so Texas A&M AgriLife faculty across the state are bringing fields to producers – virtually.

The 2020 Virtual Wheat Tour is a combination of videos from across the state that allow producers to view the field trials and hear the latest in research, said Fernando Guillen, Ph.D., Texas A&M AgriLife Extension Service statewide small grains and oilseed crops specialist, College Station.

Picking the best of the best

Winter wheat uniform variety trials, or UVT, were planted at 23 sites across the state in 18 different geographic locations to evaluate lines of wheat under both irrigated and dryland conditions, Guillen said.

Guillen said the UVT include different varieties and experimental lines developed by Texas A&M AgriLife, as well as varieties from other universities and private industry. The results gathered from these test plots are used to make sound variety recommendations to producers in the different growing regions – High Plains, Rolling Plains, Blacklands and South Texas – by way of an annual “Picks list.” The 2020-2021 list will be posted in early August.

The best materials placed in the Picks list are selected based on a careful evaluation of:

– Grain yield – the variety performs above average in its target region.

– End-use quality – specifically the variety must have above average test weight and good milling and baking attributes.

– Stability – the variety must have the ability to perform consistently across locations and years within a given region.

— In the High Plains, there were three irrigated and three dryland trials located near Bushland, Groom, Perryton, Dumas and Dalhart. In these trials, 34 varieties were planted in the dryland trials and 36 in the irrigated ones. The dryland trials included eight Texas A&M AgriLife, TAM, varieties, four new experimental TAM lines, nine from other universities and 13 from the seed industry. The irrigated trials had eight TAM varieties, three experimental TAM lines, 11 from other universities and 14 from private industry. These trials are approaching the final stages of development, and they will soon be ready to harvest. This year no trials were lost due to weather conditions at the Panhandle.

— In the Rolling Plains, there were trials under dryland conditions near Abilene, Chillicothe, Munday and San Angelo. They included 31 varieties – five TAM varieties, five experimental TAM lines, five from other universities and 16 from private industry. One location, Chillicothe, was impacted by freeze and hail damage.

— The Blacklands had trials in Ellis, Hillsboro, McGregor, Muenster, Thrall and Prosper, all under dryland conditions. The Thrall location was lost, however, due to significant cattle damage. Harvest is underway at most locations. There were 23 varieties planted – four TAM, four experimental TAM lines, one from another university and 14 from private industry.

— In South Texas, dryland trials were planted at Castroville, College Station, Eagle Lake and Uvalde and all were harvested in May. Twenty varieties were included in these trials – four TAM, five new experimental TAM lines, one from another university and 10 from private industry.

Guillen said based on the U.S. Department of Agriculture report from May, approximately 80% of winter wheat was in fair condition or better. Only 21% was listed as poor or very poor. And at that time, about 30% had been harvested.

Ibrahim reported leaf rust was a problem again this year in the southern regions of the state, although not as severe as in previous years.

“It’s been wet in many areas of the Blacklands, so much so that we didn’t get to apply second dose of nitrogen this year,” he said. “Our yields were 50 to 60 bushels per acre instead of the 70 or 80 bushels per acre we typically see there.

“We also had some freeze damage in some of the early lines in South Texas and Central Texas. We had freezing temperatures in February after the wheat had started to joint. The freeze in Uvalde and Castroville came when the stems were elongating and caused the damage.”

Ibrahim said overall they saw good moisture and timely rains, although some rains impeded field operations. All locations other than the Blacklands were expected to see average yields.

Rudd said the weather has definitely provided the most optimum conditions to find the hardiest varieties.

“The reason our varieties are such strong performers under stress is because they have been bred and selected under stress,” he said.

In 2018, there was almost no rain and 2019 there was a lot of rain and good yields. Now in 2020, the rains were in the middle – decent early rains and then some snow through February and March, before they shut off.

“This gives us a good diversity of what we need when looking at different germplasm. Since breeding is a long multi-year process, something that can do really well in all three years are definitely keepers,” Rudd said.

He said many of the plots saw freeze and hail damage and then recent high winds caused some shattering in wheat lines that were not bred for the High Plains.

“Our target environment is a tough place and we need lines that will survive all these conditions,” Rudd said. “There are several experimental lines coming through the pipeline that we feel very good about. What we have in the pipeline are better than the existing varieties. The process works.”

New tools in the fight against lethal citrus disease
August 10, 2020