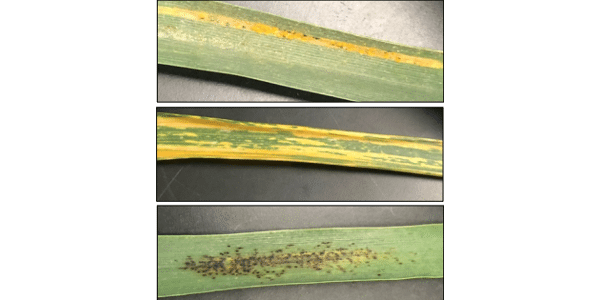 We do not believe that stripe rust overwintered in Colorado this season and was first observed May 26th near Roggen, CO, states report. (Courtesy of Colorado State University Agricultural Biology and Colorado Wheat Administrative Committee)

FORT COLLINS, Colo. — Tan spot. Early in the season we had high incidence of tan spot in the lower canopy, but it did not persist into the upper canopy and severity was relatively low. Tan spot is favored by cool wet conditions, so it typically does not persist in our region unless we have unusually high moisture or wheat is under irrigation. Fungal spores that cause tan spot survive in wheat stubble, so non-host rotation and control of wheat residue are important management strategies. Tan spot can be controlled during the growing season with foliar fungicide application.

Stagonospora/Septoria leaf blotch. There was very low incidence of Stagonospora/Septoria leaf blotch this season observed only in Sedgwick county, in late May, but with moderate severity in the mid to upper canopy. Dry and hot conditions likely prevented widespread occurrence of these pathogens, compared to the 2019 season. These leaf blotch fungal diseases are characterized by oval or irregular shaped brown lesions sometimes surrounded by a yellow halo with small black spore-bearing pycnidia developing with maturity. Stagonospora is known to infect heads either with or without leaf blotch symptoms. These lesions are dark brown ovals on the glumes often towards the upper portion of the glume. This can cause infection of seeds which can transmit this pathogen. Both of these fungi can survive in wheat residue and soil for long periods and can be spread by wind. You may be able to observe black spots on the wheat stubble following harvest of infected wheat, which is a good indicator of need for control measures. Management strategies include control of wheat residue, non-host rotation and planting of fungicide treated seed. Foliar fungicide application can be used to control widespread infections during the growing season.

Stripe rust. We do not believe that stripe rust overwintered in Colorado this season and was first observed May 26th near Roggen, CO. This was followed by several other observations of stripe rust. Leaf rust and stem rust was spotted at ARDEC late in the season. As with the above fungal pathogens the hot dry weather conditions likely prevented widespread infection of stripe rust that can occur in eastern Colorado. Some active stripe rust pustules that are infectious to wheat were observed (top image) however, we also observed several instances of stripe rust initial infection that did not develop the spores needed to spread disease (middle image). Further, we saw black spots (lower image) which are indicative of a change in the life cycle of stripe rust causing the production of spores that are not infectious to wheat. We did have a report of stripe rust developing on Canvas, a variety that is known to have excellent resistance, possibly indicating a shift in the population affecting our area. This possible shift in virulence has also been observed in Kansas. Samples of the Colorado population found on a resistant variety have been collected for further characterization and we will continue to monitor our stripe rust population in the coming season. To see the most current variety ratings see the CSU Variety Characteristics Table at https://col.st/eNE8h, or search by stripe rust and other characteristics on the Colorado Wheat Variety Database at http://ramwheatdb.com. Timely foliar fungicide application to affected varieties can be an effective control measure (see KSU Foliar Fungicide Efficacy Ratings at https://bookstore.ksre.ksu.edu/pubs/EP130.pdf).

White Heads. Later in the season around mid-June, we observed white heads on maturing wheat across eastern Colorado, with very high incidence in the Orchard area. White heads can be caused by environmental factors such as hail, high winds, early season frost damage, or drought and high temperatures during grain filling. White heads are also a symptom of dryland foot rot and common root rot that are caused by several soil fungi, sometimes forming a complex causing more severe disease symptoms. The stress caused by drought and high temperatures favor the development of these diseases. Symptoms include white heads with poor grain fill and brown to pinkish discoloration at the base of the stem. Leaf spots may also be observed. While we saw symptoms consistent with fungal-caused rot including stem lesions and partially filled heads, not all plants with white heads had stem lesions and grain was filling nicely. Likely weather conditions and fungal pathogens both contributed to the occurrence of white heads. Fungal pathogens that cause dryland foot rot and common root rot survive in the soil and on wheat residue as well as other grass species. These pathogens are most prevalent in continuous wheat or wheat-fallow systems, therefore rotation and control of wheat residue are key factors in controlling these diseases.

Wheat curl mite (WCM) transmitted viruses including, wheat streak mosaic virus (WSMV), triticum mosaic virus (TriMV) and High Plains wheat mosaic virus (HPWMoV) continue to cause yield losses in Colorado. A field survey of viruses from several counties in Colorado showed that the 2020 season had less virus incidence and severity than the 2019 season (Table 1). In 2019, 95% of symptomatic field samples tested positive for one or more WCMtransmitted viruses, whereas, in 2020, 75% of samples were positive with relatively low symptom severity. Moreover, the initial presence of WSMV was detected earlier in 2019 (April 7th) than in 2020 (April 27th). Last winter brought colder than average temperatures to Colorado that may have reduced the number of mites that were able to overwinter into 2020. Furthermore, the WCM cannot survive in high temperatures and dry conditions, which maybe another reason for limited spread of the virus in 2020. 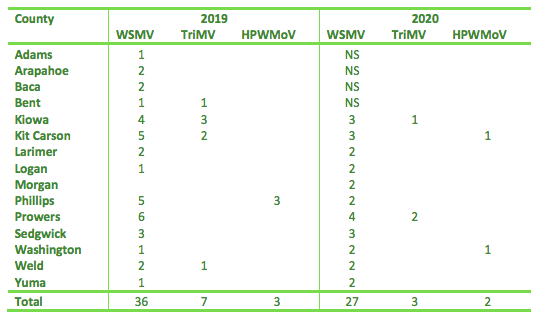 The single most effective management strategy for preventing fall virus infection is to control volunteer wheat. Additional considerations include not planting winter wheat next to corn, as WCMs will move from the volunteer wheat to the corn and then back to emerging winter wheat. It is also a good idea to avoid early planting by waiting until at least mid-late September and allow a minimum of two weeks after herbicide application to ensure there is no green bridge for the mites to survive. Planting varieties with genetic resistance or tolerance to WSMV can be an effective management strategy. Review the Colorado Winter Wheat variety characteristics database for updated WSMV ratings (http://ramwheatdb.com). It is important to remember that widespread use of these varieties will cause the mite vector and virus to overcome these resistance mechanisms. Therefore, it is important to not only rotate crop species that are produced but also to rotate varieties of wheat with different mechanisms of resistance (Snowmass 2.0 vs. Canvas) or tolerance (Hatcher). One way to delay resistance breakdown is by pyramiding mite and virus resistance genes to ensure improved and durable resistance (Guardian). Over the last two years, our research revealed new WSMV and HPWMoV isolates collected from Colorado. Indeed, we detected moderate to high WSMV levels in several resistant varieties including Guardian, Canvas, Crescent AX and Snowmass 2.0. The effect of different isolates on host resistance responses is unknown and requires further investigation.

Hot, Drought Conditions Favored Aphid Populations
We have observed various types of aphids with leaf symptoms that are consistent with barley yellow dwarf virus (BYDV) or cereal yellow dwarf virus (CYDV). While aphids and/or symptomatic wheat were observed in several locations, only four out of 36 samples tested from Logan, Sedgwick and Yuma counties were positive for BYDV. None of the tested samples were positive for CYDV. Yellow dwarf virus (YDV) symptoms include yellowing that progresses from margin to midvein and/or reddish to purple leaf tips, as well as stunting. YDV symptoms are similar to those caused by other factors and can easily be confused. Aphid feeding in the absence of YDVs can also cause leaf damage. As they suck plant sap, the aphid injects toxic salivary secretions into the plant cells. The toxin kills the cells and results in a yellow or reddish stippling on the leaves. Also frost damage can result in reddish to purple leaf tips. High temperatures and drought this season likely favored high aphid pressure. BYVD can be transmitted by 25 different species of aphids but, the most common vectors are English grain aphid, bird-cherry oat aphid, corn leaf aphid and greenbug. Infestations may occur at irregular spots within the field or as a general infestation throughout the field. Fall infestations are most damaging but spring infestations do occur. A wide range of losses due to YDVs has been reported. Management strategies include delayed planting, genetic resistance or tolerance, and control of weedy grasses as a variety of cultivated and wild grasses can serve as hosts for YDVs. Using insecticide treated seed should protect seedlings from fall infection and increased losses.

Seed Treatments
Rick Novak: rick.novak@colostate.edu
Sound wheat production begins each fall with your management decisions. Always begin with the selection of a good variety, apply a seed fungicide treatment to maintain sound plant health and uniform seedling emergence. Fungicide seed treatments will control several diseases like bunts, smuts, seedling blights. Managing seed borne disease with a fungal seed treatment will break that disease cycle. There are several different seed treatment product management options available. I would like to make the point that there is a lot of research that confirms an application of seed treatment can break the fungal disease cycle and control many diseases effectively. In addition to the application of a fungicide seed treatment, always plant clean seed and when available choose disease resistant varieties. I highly recommend that you talk to your local seed dealer and ask for their seed product recommendation for your local area. For information on wheat seed treatments frequently used for wheat disease management in Kansas see https://bookstore.ksre.ksu.edu/pubs/mf2955.pdf.