North Dakota producers have harvested just over half of their wheat crop. (Chris Worden via Flickr)

MANDAN, N.D. — Harvest of the U.S. spring wheat crop continues at an above average pace, although rains over the last week have caused delays in areas. Currently, about 58 percent of the U.S. crop has been harvested. South Dakota is reaching harvest completion at 88 percent. Montana is about two-thirds complete and North Dakota producers have harvested just over half of their crop. Minnesota is the only state where harvest is behind average at 42 percent complete. Condition ratings for the unharvested crop remained relatively stable with 42 percent in poor to very poor condition, 24 percent in fair condition and 34 percent in good to excellent condition.

Much of North Dakota received precipitation over the last week ranging from a trace to nearly three inches. The heavier rain fell in the central and eastern portions of the state, delaying harvest progress and causing some concerns over color loss and adverse effects on test weight. Yields remain extremely variable with western producers reporting anywhere from less than 10 bushels to acre to 30 bushels on acres that weren’t abandoned. In the east yields are higher, ranging from 35 to 70 bushels per acre. The NDSU spring wheat quality lab has begun analyzing quality on the 2017 crop, with less than 20 percent of the samples collected and analyzed. The early quality data shows as expected with higher protein and vitreous kernel content, and slightly lower test weights, showing the effects of drought stress. Protein is currently averaging 15.4 percent, compared to 14.1 percent last year and falling number is above 400 seconds. Vitreous kernel content is at 88 percent and average test weight is lower than last year at 60.6 pounds per bushel (79.7 kg/hl). This quality data will continue to change as more samples are collected and weekly updates will be provided.

Durum harvest is about 20 percent complete in North Dakota. Yields so far have been below average, as expected. Protein so far is higher than average and test weights are a bit lower. More quality data will be available in coming weeks. Crop condition ratings remain low with 44 percent rated poor to very poor, 45 percent rated poor and 11 percent rated good. Nearly three-fourths of the Montana durum is harvested, compared to 28 percent on average. Harvest is being pushed along by hot, dry conditions; extremely low yields; and no rain delays. 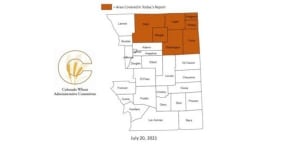 NDSU sets Best of the Best in Wheat Production meeting in Minot for Feb. 15
February 5, 2023