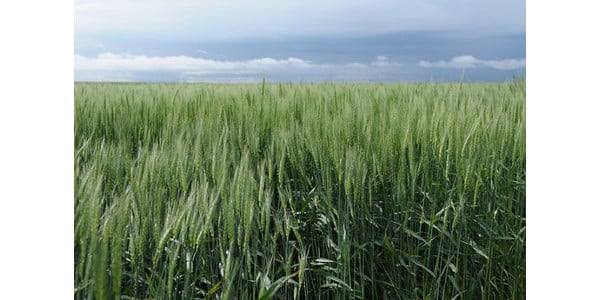 “We don’t have names for these yet, so right now they’re referred to by their experimental numbers,” Fritz told viewers during the field day, held May 27-28.

One variety, KS09049K8, is the offspring of two Kansas varieties – Duster and Overley – “with a little bit of spring wheat from CIMMYT,” the International Maize and Wheat Improvement Center that has headquarters in Mexico City, Mexico, according to Fritz.

“It’s a medium early variety, and is really the culmination of our efforts to breed race non-specific lines for leaf rust resistance,” he said. “This holds up very well to leaf rust.”

“Those of you who remember Duster will know that it is extremely high for tillering,” a term to indicate a wheat’s ability to form additional stems off the plant’s main shoot, thus increasing its potential for higher-yielding wheat.

The new line, Fritz added, doesn’t quite get to the capacity of Duster, but says he believes it will have good yield potential in central Kansas.

“The quality of this one is good, and the other thing I like about it is it does have some Hessian fly resistance,” Fritz said. “Hessian fly is not a huge issue around here, but it is nice to have some options out there to deal with Hessian fly, when necessary.”

“But I would say the resistance is good enough to give you a broader window for fungicide application. With this line, you should have enough stripe rust resistance, so I would put it in the moderately-susceptible category. If it’s a stripe rust kind of year – like this year in many places – then you would definitely want to put a fungicide on it.”

Fritz stopped short of naming the new line, but noted he and others are considering a name to honor former U.S. Department of Agriculture entomologist Jim Hatchett, who was based in Manhattan and contributed to wheat breeding in the Great Plains, he said.

A second wheat line ready for release is currently known as KS12DH0156-88, which has lineage connected to an Oklahoma State University wheat named Gallagher.

“We’re going to say that Ahearn was a much better basketball venue than Gallagher-Iba.”

Joking and sports rivalries aside, Fritz said this wheat line is a late-maturing variety that “has effective levels of leaf and stripe rust.”

“This one is more intermediate on acidic soils, so if you’re getting into soils with fairly low Ph levels, I might lean toward planting something else,” Fritz said. “But this one will handle soils with Ph levels down to at least 5 and maybe even a little lower than that.”

He called the quality of this wheat line “good, but not great” with yield potential on the higher end. “This one has been a bit of a race horse for us,” Fritz said. “It’s done really well in our trials, and that’s the history of Gallagher, as well.”

“Even though it’s a later-maturing line – and I would normally say later fits better in the north part of Kansas – this has actually been better in southcentral Kansas.”

Fritz said both of the lines he talked about are susceptible to fusarium and, thus, he does not suggest either as an option in no-till fields following corn.

Dairy farmers give back with local blood drives