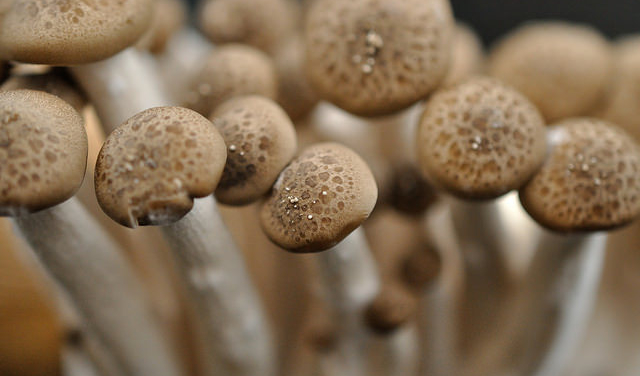 The Mushroom Council is composed of fresh market producers or importers who average more than 500,000 pounds of mushrooms produced or imported annually. (m.shattock, Flickr/Creative Commons)

The Mushroom Council recently released The Mushroom Sustainability Story: Water, Energy and Climate Environmental Metrics 2017. This study finds production of a pound of mushrooms requires only 1.8 gallons of water and 1.0 kilowatt hours of energy, and generates only .7 pounds of CO2 equivalent emissions. In addition, the annual average yield of mushrooms is 7.1 pounds per square foot – meaning up to 1 million pounds of mushrooms can be produced on just one acre.

The Mushroom Council’s “What’s Your Mushroom Sustainability IQ?” quiz tests key findings from the study. Individuals who take the quiz by April 22 receive a special promo code and a link to take the “Blenditarian Pledge,” where they commit to mixing finely chopped mushrooms with meat for more sustainable dishes. For each pledge received by Earth Day (with the promo code), the Mushroom Council will donate $0.25 to The Conservation Fund (up to $1,000). Each person who pledges automatically enters for a chance to win a mushroom mini farm set and a $100 Whole Foods gift card.

About The Mushroom Council

The Mushroom Council is composed of fresh market producers or importers who average more than 500,000 pounds of mushrooms produced or imported annually. The mushroom program is authorized by the Mushroom Promotion, Research and Consumer Information Act of 1990 and is administered by the Mushroom Council under the supervision of the Agricultural Marketing Service. Research and promotion programs help to expand, maintain and develop markets for individual agricultural commodities in the United States and abroad. These industry self-help programs are requested and funded by the industry groups that they serve. For more information, visit mushroomcouncil.org.