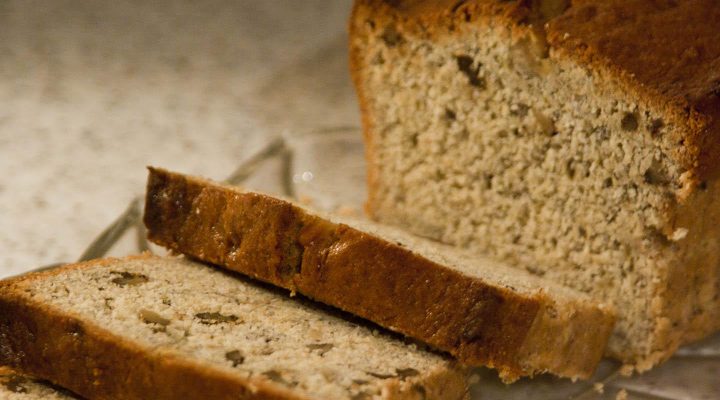 This recipe includes whole-grain oatmeal, which can help us meet the goal of making half of our grain choices whole grains. (Photo courtesy of Morguefile)

FARGO, N.D. — “What kind of sweetener would you like?” my husband asked me.

“I’ll have a blue packet,” I said. He handed me the small packet. I ripped it open and added half of it to my coffee cup. He took a pink packet.

We were eating in a restaurant. I’m not sure why we always add some sweetener to our coffee when we eat outside the home. We have plain black coffee at home. I guess that chemically enhancing our coffee is our special treat.

Maybe I just talked myself out of adding sweetener to my coffee.

“What’s the difference between the blue, pink and yellow packets of sweeteners?” he asked.

I have a feeling my husband was vying to be the star of this column by questioning me about food. His ploy worked.

Because I was not caffeinated yet, I avoided being “punchy” and telling him that that pink is for girls and blue is for boys.

What were we adding to our coffee, anyway? All of these products are considered safe by the Food and Drug Administration (FDA), or they wouldn’t be allowed in the food supply. Most contain an added carbohydrate such as dextrose to serve as a carrier for the sweetener because the amount of sweetener is so small.

The blue packet contained “Aspartame” or “Nutrasweet,” which is the same sweetener used in many diet sodas. According to the packet label, this artificial sweetener had no calories, no sodium, no fat and less than 1 gram of carbohydrate.

Aspartame is made of two amino acids (protein building blocks): aspartic acid and phenylalanine. You will notice a warning on the packet: “Phenylketonurics: Contains phenylalanine.” People with this inherited disorder (phenylketonuria) must follow a special diet, and they typically are diagnosed at birth.

You should not use Aspartame in recipes that require baking or extended heating because it will lose its sweetness. You can add it at the end of cooking.

The pink packet chosen by my husband consists of the artificial sweetener Saccharin or “Sweet ‘N Low.” Developed in 1878, Saccharin is up to 700 times sweeter than sugar and can be used in many applications, including cooking and baking. In higher amounts, however, you might detect a bitter aftertaste.

For many years, Saccharin carried a warning label because it was linked to causing bladder cancer in rats. However, the warning label was removed in 2000 when this was not shown to be the case in humans.

The yellow packet contained Sucralose or “Splenda.” This artificial sweetener is made from sugar but it is processed in a way so it is not absorbed by our body. It was approved by the FDA in 1998 and is 600 times as sweet as sugar. It can be used in a wide variety of foods and as a sweetener on the table.

Many other sugar substitutes, including Stevia (an herbal product) and Xylitol (a sugar alcohol), are available. If you are on a special diet, be sure to visit with a dietitian or other health-care provider before making changes in your diet.

What are the functions of “real sugar,” or “sucrose”? Besides flavor, sugar plays a role in browning reactions in baked products because of its caramelizing effect. It also contributes to the texture and volume of baked goods. Baked goods made with real sugar may retain their moistness longer because sugar naturally holds onto moisture.

Yes, sugar can fit in a healthful diet in moderation. The American Heart Association recently recommended a maximum of 9 teaspoons of added sugar per day for men and 6 teaspoons per day for women.

Be aware of the amount of added sweeteners by examining “added sugars” in the upcoming new food labels. In many recipes, you can trim sugar content by one-fourth without affecting the final product. In other words, you would add 3/4 cup of sugar if the recipe called for 1 cup. You can make up for the “bulk” lost by substituting nonfat dry milk for the remaining sugar.

To reduce sugar in already-sweet foods, try a sprinkle of powdered sugar instead of a layer of frosting as the finishing touch on cake. Try adding cinnamon or nutmeg to enhance natural sweetness.

I might try a sprinkle of cinnamon on my coffee and enjoy it with a piece of this delicious banana bread made with naturally sweet, ripe bananas. The nutrition of this recipe is enhanced by the addition of healthful whole-grain oatmeal. We all should strive to make about half of our grain choices whole grains. See https://www.ag.ndsu.edu/food for more information and to check out “The Family Table,” our latest initiative.

Preheat oven to 350 F. Grease or spray a 9- by 5-inch loaf pan. Beat the oil and eggs with a mixer (or by hand). Add sugar and beat until fluffy. Mix flour, oats, baking soda, baking powder and salt in a bowl. Add flour mixture and mashed bananas to oil and egg mixture. Add raisins or nuts if you want. Stir until blended. Pour mixture into loaf pan. Tent a piece of aluminum foil over the top of the pan (to prevent overbrowning). Bake for 50 to 60 minutes. Bread is done when toothpick inserted in the center of bread comes out clean. Remove bread from oven and let it cool for five to 10 minutes. Run a knife between the bread and the sides of the pan. Turn the pan upside down on a baking rack. Cool bread before you cut it.