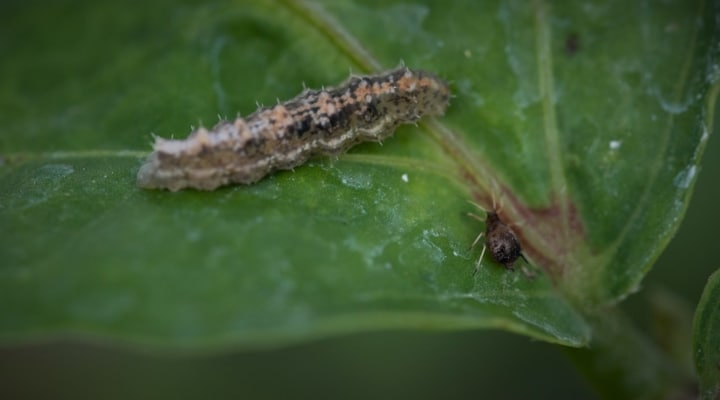 COLLEGE STATION, Texas — Pests grubbing on garden vegetables before they make it to the table might as well be a declaration of war against gardeners.

Being proactive is better than being reactive, he said. Knowing what you’re up against, having a battle plan and the right weapons to fight back takes vigilant scouting and timely treatments that will kill or deter pest bugs and/or eggs and larvae.

Masabni said it’s important to treat plants to kill pest insects and curb infestations throughout the life of the plant. Whether you prefer organic or conventional pesticides is up to you, just use something. Insect pests can stunt plant growth and introduce diseases that can kill the plant or damage fruit.

Animals can also be a damaging pest to home gardens, especially in times of stress like drought, Masabni said. Deer don’t prefer tomato or okra plants, but in a dry year, deer will nibble on them. So, they should be prevented from accessing the garden, if they are known to frequent the area, and/or damaging plants.

“You have to understand that pests are going to be an issue at some point. It’s really just a matter of when and how bad,” he said. “The key to success is to be in the garden every day, scouting and being ready to fight any bugs that want to feed on your plants.”

How to get rid of bugs eating your garden

Insects are a big issue, Masabni said. It’s better to be proactive than reactive when it comes to bugs that infest and eat your plants and fruit or spread disease.

Nematodes are a hidden pest that live in the soil and attack plant roots and kill plants, Masabni said.

Pests negatively impact vegetable production by sucking and chewing on plants or as vectors for diseases.

Aphids suck on leaves and stems while stinkbugs suck on fruit and stems, Masabni said. Grasshoppers will eat entire leaves and corn earworms feast on fruit like tomatoes, peppers and ears of corn.

Some insects, such as the cucumber beetle, are more dangerous because the damage is seen a month after they visited the plant as a viral disease, he said.

Some common signs of pest problems include plants that are stunted or not growing properly, deformed or damaged leaves, yellowed or light in color, and wilted or droopy.

The key is vigilant monitoring and action.

Masabni said small gardens can be protected by manually killing adult pests, larvae and eggs, but it takes close inspection of each plant on a regular basis.

“Every season, I receive emails from people when they’re already having problems,” he said. “Most every time they respond that they’re not spraying, or at minimum manually staying on top of pests. The simple truth of gardening is you can’t grow vegetable crops without spray applications and regular scouting. Otherwise, they will literally eat your garden alive.”

Spray with fungicides and insecticides

If the war against pests and disease is lost this season, buy a quality backpack sprayer and at least three fungicides and three insecticides before you plant another seed or seedling.

“Start your spray regimen early, especially when the plants make their first flower since this is the stage insects like squash vine borers or squash bugs become active,” he said.

Apply sprays to transplants upon planting or seedlings once they’ve emerged, Masabni said. Spray plants with the mix every seven-14 days depending on the weather.

He recommends Spinosad, Bt or any horticultural oil as organic insecticides. Fungicides and insecticides can be mixed and applied at the same time, he said, but check labels and/or conduct a jar test first.

In a jar test, add both products to water and shake well and watch to see if the products bind together, Masabni said. If they bind, don’t mix them.

Having and using a variety of fungicides and pesticides will decrease bugs’ ability to build up resistance to any one treatment, he said. So, switch up the fungicide/pesticide mix every third treatment.

Many pests hide and/or lay eggs on the underside of leaves, so it’s important to drench the plant, he said.

Wash fresh produce using cool, running water. Produce that has a thick skin like potatoes and carrots can be scrubbed with a brush.

“You have to spray something if you want a crop,” he said. “During my research trials, I got 10% of the potential crop from plants that didn’t receive any spray treatments.”

How to keep birds and other animals from eating your garden

Vegetable and fruit losses to larger pests like birds, rabbits, raccoons and deer are typically minuscule compared to insects and disease. However, animals can consume entire crops when they target a plant or during stressful times like drought.

But protecting plants from larger pests is a little more straightforward, Masabni said. Fences and nets are best.

Netting should be draped over stakes that allow it to hang loosely over the plants, he said. Rabbits, racoons and deer can be deterred with wire fencing or multiple-wire electric fencing that prevents access.

“Shiny reflectors and scarecrows look neat, but the only thing that will protect your crop from birds is netting,” he said. “The same goes for deer and other animals. You need some sort of fencing to deter or prevent entry.”

New tools in the fight against lethal citrus disease

Kale is an easy crop that keeps on giving
September 24, 2020