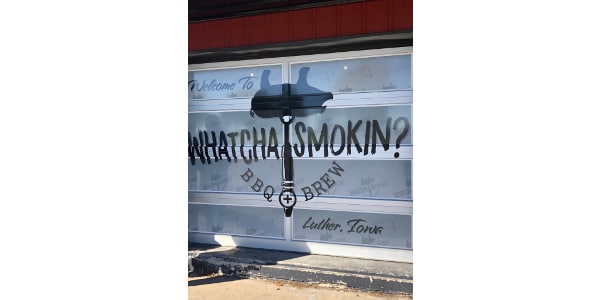 A Luther, Iowa, barbecue restaurant came out on top in the championship round of Pulled Pork Madness, a bracket-style social media contest presented by the Iowa Pork Producers Association (IPPA). Whatcha Smokin? BBQ + Brew earned the top honor in the contest that wrapped up April 2. (Courtesy of IPPA)

CLIVE, Iowa — A Luther, Iowa, barbecue restaurant came out on top in the championship round of Pulled Pork Madness, a bracket-style social media contest presented by the Iowa Pork Producers Association (IPPA). Whatcha Smokin? BBQ + Brew earned the top honor in the contest that wrapped up April 2.

The third-annual contest follows a similar narrowing process as the NCAA’s March Madness college basketball tournament. Last month, nearly 1,700 pork fans nominated 125 Iowa restaurants they felt have the best pulled pork sandwiches. The two restaurants with the most votes in each of IPPA’s eight districts made up the starting “Sweet 16” bracket. Voters then determined which advanced to the “Elite 8,” “Final Four,” and championship rounds. 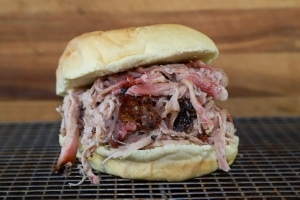 Whatcha Smokin? won out over Moo’s BBQ in Newton, which was crowned the champion in 2018.

“We are blown away by the support of the Whatcha Smokin? nation,” said Makala Brinkley-Seitz, marketing and development manager for Whatcha Smokin?. “This contest gives our fan base a new way to interact with us during a time when we don’t get to see them in the restaurant. Additionally, Pulled Pork Madness has boosted staff morale. They see the love that our guests have for them.”

Amid the spread of COVID-19, Iowa Gov. Kim Reynolds has ordered all restaurants to suspend dine-in service for several more weeks. Whatcha Smokin? has reduced hours and is offering online and call-in ordering, as well as curbside to-go service.

“During this time of closures and social distancing, it became even more important for Iowa Pork to continue a campaign that promotes Iowa businesses and creates some safe social media fun,” said Kelsey Sutter, IPPA’s marketing and programs director. More than 6,600 votes were cast throughout the campaign.

At Whatcha Smokin?, a central Texas-style barbecue restaurant, pork is slow-smoked daily. The 16-hour process starts with trimming fat and rubbing each pork butt with spices, then moving the meat to the smoker for 12 to 13 hours. As the butts cook, spritzing them with apple juice helps ensure a tender, juicy inside and caramelized bark outside.

The “fresh-pit” pulled pork is cut to order and served without sauce, as “we like to let the meat speak for itself,” according to Brinkley-Seitz. Each sandwich features a 6-ounce pile of meat on a white or wheat bun, with a side of pickles. Pulled pork also is sold in quarter, half, and one-pound takeout quantities.

Business partners and owners Tanya Doyle and Steve Perlowski owned two establishments in Ames before opening Whatcha Smokin? in a former gas station, just outside Ledges State Park, in June 2017. Perlowski became interested in barbecuing and smoking while living in Ames, where he could smell a local restaurant smoking meats daily. He learned to trim, season and smoke briskets from watching videos on his cell phone.

Along with bragging rights, Whatcha Smokin? will receive a “Pulled Pork Madness” plaque and $500, double the $250 prize awarded in the past to provide some financial relief during these challenging times, Sutter said.

Here is a full list of the 2020 Pulled Pork Madness restaurants that competed in the bracket rounds:

Warehouse Barbecue Co. + Brewhouse in Ottumwa was the 2019 winner, and Moo’s BBQ of Newton won the first contest in 2018.