Home / Ohio / What to do if you can’t plant a cash crop
A new user experience is coming! We'll be asking you to login to your Morning Ag Clips account March 1st to access these new features.
We can't wait to share them with you! Read more here. 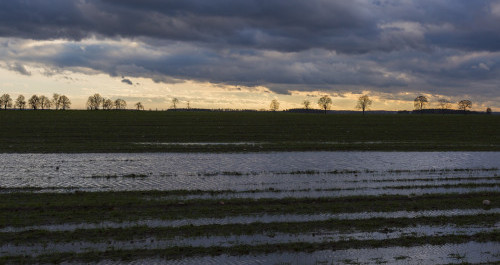 Growers who opt not to plant corn or soybeans this year because of consistently wet fields would be best off not leaving those fields bare, according to an expert at The Ohio State University. Planting a cover crop such as oats, buckwheat, or cereal rye to have something on the field helps slow soil erosion and can improve soil health. (Getty Images)

COLUMBUS, Ohio — Growers who opt not to plant corn or soybeans this year because of consistently wet fields would be best off not leaving those fields bare, according to an expert at The Ohio State University.

A bare field is a vulnerable field, subject to losing its valuable, nutrient-rich layer of topsoil because wind can blow the topsoil away and rain can wash it away, said Sarah Noggle, an educator with Ohio State University Extension, the outreach arm of Ohio State’s College of Food, Agricultural, and Environmental Sciences (CFAES).

And a field without a crop is an open invitation for weeds to take over, making it harder to prevent weeds the next time a crop is planted there, Noggle said.

Planting a cover crop such as oats, buckwheat, or cereal rye to have something on the field is a wise choice, she said. In addition to helping slow soil erosion, cover crops can improve soil health.

Nationwide, more farmers are planting cover crops. The national cover crop acreage increased by 50% over the past five years, according to the 2017 Census of Agriculture.

“Cover crops can be a good way to take advantage of an otherwise unfortunate situation,” Noggle said.

This spring, many Ohio farmers are having to consider what to do with fields where they normally would have planted corn or soybeans. The wettest yearlong period in Ohio on record has left regions across the state consistently saturated, delaying or preventing growers from being able to plant in them.

Some Ohio farmers who typically plant corn, soybeans, or both could choose not to plant either and instead, file insurance claims so that they can gain some earnings rather than risk planting in mud.

Up to one-third of Ohio’s acres that normally have soybeans or corn growing on them could be left unplanted, said Ben Brown, manager of CFAES’ Farm Management Program. Much of the unplanted acres will be in northwest Ohio, the region of the state that has been the hardest hit by rain this spring.

“We want to plant. That’s what we do as farmers,” Brown said. “So it’s a ridiculously hard decision not to plant.”

If a farmer decides not to plant corn or soybeans this season, he or she will be ineligible to receive federal aid through the Market Facilitation Program (MFP). The program is aimed at helping offset farmers’ losses as a result of the recent overseas tariffs on U.S. goods, including corn and soybeans.

But farmers who plant a crop such as soybeans as a cover crop and don’t harvest it might still be able to collect a minimal MFP payment, Brown said. However, there’s a stipulation: The soybean cover crop has to be grown on land that had been intended to grow corn.

While there’s still time in the growing season to plant soybeans, how many acres will be planted in Ohio and across the Midwest is uncertain. Much of that hinges on the weather. Above-average rainfall is predicted for the rest of the month, and national predictions call for July and August to be wetter than normal across much of the country.