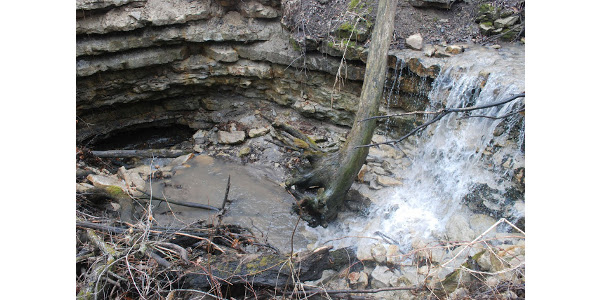 Direct connections between water running over the land surface and groundwater, although not usually as dramatic as this cave entrance in Fillmore County, are common in karst regions. (Image credit: Greg Klinger/U of M Extension)

MINNEAPOLIS — Recently, in response to a previous blog post on the state’s updated Groundwater Protection Rule (GPR), we have been asked why groundwater in some areas of Minnesota is more vulnerable to contamination.

The GPR, which is focused on keeping the nitrate form of nitrogen out of groundwater, has a technical definition of what constitutes “vulnerable” groundwater areas. This definition, based on work done by the Natural Resources Conservation Service and Minnesota Department of Natural Resources, has real-life consequences for farmers and agricultural professionals, as it restricts the application of nitrogen fertilizers in the fall and on frozen soils in these vulnerable areas. While there is a specific technical definition for “vulnerable”, in general terms, one of three factors must be present for groundwater to be more susceptible to contamination from activities on the land surface: sandy or gravelly (otherwise known as coarse-textured) soil, karst geology, or shallow bedrock. In this blog post, we briefly discuss each of these geological properties and how they affect contaminant movement into groundwater.

Coarse-textured soils are a major factor for determining vulnerability, especially in the central region of Minnesota, although these soils can be found throughout the state. In coarse-textured soils, most of the individual particles and the pore space between those particles is large. These large pores allow water to rapidly move through them. Water moving into and through the soil is not strongly held against the pull of gravity and is easily leached deep into the soil profile. Infiltrating water in these settings can rapidly move down to the water table, which often serves as a source of drinking water.

By contrast, as soils increase in their percentage of finer-grained textures (such as silt and clay), there is a greater proportion of small pores between soil particles where water is held more strongly against the force of gravity. As a result, most of the water in fine-textured soils moves slowly down to the water table. That slower movement can be an important factor impacting groundwater quality, because some chemicals (for example, nitrate, or the herbicides atrazine or glyphosate) may break down over time in the soil. In general, the longer it takes for water to reach the water table, the less contaminants may be left when it reaches groundwater. 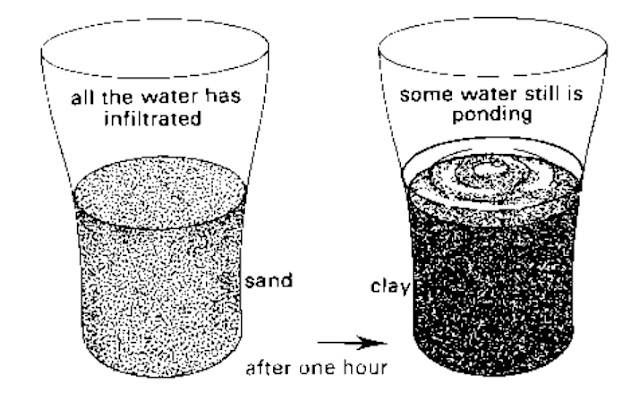 An illustration of the difference in infiltration rates between a clay soil and a sandy soil. (Image source: FAO)

Karst geology is another factor that affects groundwater vulnerability. In karst, which is common across southeastern Minnesota, groundwater can be highly vulnerable to contamination.

In karst, the underlying limestone rock is riddled with a system of holes, channels, and tunnels that make it easy for water to rapidly enter the bedrock. Karst effectively acts like a tile drainage system that moves water from the soil through bedrock to groundwater and springs. Even where the bedrock is buried under 30-50 feet of soil, it can be vulnerable to contamination. Common signs that karst is present in an area range from the dramatic (sinkholes, caves , large bubbling springs in creeks, or creeks that disappear underground) to the subtle, such as cracks in the rock, a “stacked domino” appearance of rocks in road cuts, or small (~1”) sucking holes that form in fields in the spring when soils are saturated. The potential for groundwater contamination in karst is very complex. For more information on groundwater vulnerability in karst, check out this excellent set of resources from the Minnesota Department of Agriculture, including the two-part video below.

Shallow bedrock (usually defined as less than 40 inches below the land surface is the last major factor that can make groundwater vulnerable to contamination. Shallow bedrock vulnerability applies to all types of bedrock. There are several reasons for the elevated vulnerability in this setting. The primary reason is that in shallow bedrock settings, there is less time for the overlying soil to be in contact with a contaminant, meaning that there is less time for the soil to break down the contaminant or filter it out of water moving through the soil. The other factor is that certain types of rock, like granite, hold very little water within the rock itself. Where they do hold water, it is in small fractures and cracks within the rock that were formed from pressure. As a result, water moving through the soil may become concentrated in small areas within the rock, and contaminants can as well.

When we talk about groundwater being highly vulnerable to contamination, it’s important to realize that “vulnerable to contamination” does not equal “contaminated”. Take the example of chloride, a chemical increasingly found in Minnesota lakes, streams, and groundwater that comes mostly from road salt. Think about areas where you can often see bedrock at the ground surface (for example, northeast Minnesota). Since most of that area is so remote and away from roads, if you were to drill a drinking well into a fracture in that shallow bedrock, in most places you would not see high levels of chloride. However, if someone built a blacktop road right next to that well, and the next winter it got salted every snowstorm, you would probably see chlorides showing up in your well. Just as importantly, you might have high levels of chloride in your well before a well that’s been next to a major road for 50 years would, if that well was not in a highly vulnerable area.

Highly vulnerable groundwater areas are the proverbial “canaries in the coal mine”- they show what might (depending on how any specific contaminant is used and behaves) happen down the road in less vulnerable areas. Chemicals that break down, like nitrate or atrazine, might never show up in less vulnerable groundwater; chemicals that don’t break down or disappear, like chloride, might just take a lot longer to get there.

There are two implications of all this: First, land management practices that do not cause contamination issues in one groundwater area may still cause contamination in another groundwater area, due to their soils and geology. Second, just because groundwater in a particular area is higher in something like nitrate or chloride doesn’t mean people in that area are doing a “worse” job of managing nitrogen or road salt than people elsewhere. They could just be dealing with more challenging geology.

Dig in to Farm to School with Sprout Marketplace

Fall and winter drought could cause challenges
April 26, 2021