Home » What makes a fruit flavorful? 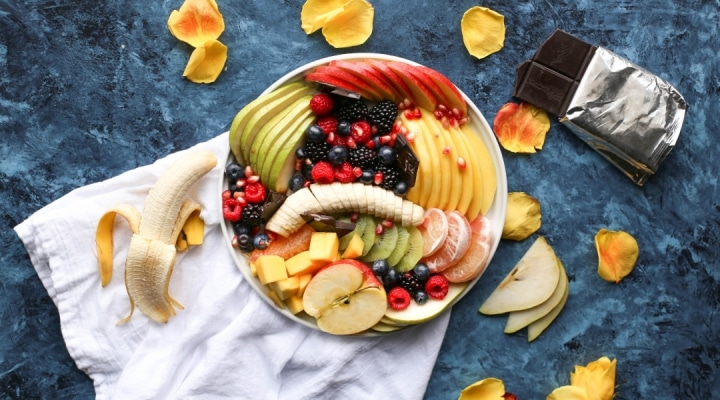 Flavor plays an important role in which varieties of fruit people choose to eat. We believe that our models can help plant-breeding programs develop more flavorful varieties of fruit by making it easier to determine what objectively makes one variety taste better than another without needing to gather large consumer panels. (Photo by Brenda Godinez on Unsplash)

GAINESVILLE, Fla. — Which flavors and chemical compounds make a particular variety of fruit more appealing to consumers can be identified and predicted using artificial intelligence, according to our recently published study.

Flavor, defined by scientists as the interaction between aroma and taste, is chemically complex. The sugars, acids and bitter compounds in food interact with the taste receptors on our tongues to invoke taste, while volatile compounds that interact with olfactory receptors in our noses are responsible for aroma.

Breeding for flavor is a difficult task for many different reasons. For one, fruit and vegetable plant breeding programs need to improve several different traits that appeal to both producers and consumers. Creating the optimal genetic combination that covers all these traits is difficult, so breeding programs often deprioritize flavor to focus on improving disease resistance and increasing yield. Plant breeders must also evaluate hundreds to thousands of potential varieties. Testing a single sample in an objective way requires consumer panels of up to 100 people, which can be expensive and impractical to arrange.

To streamline this process, we developed an algorithm to predict how consumers will rank flavor in tomatoes and blueberries. We created a database containing all known compounds associated with flavor in all varieties of these fruits. Then, we compared this database with existing consumer panel ratings on sweetness, sourness, umami and overall flavor and preference of different varieties. By modeling how consumer ratings varied with the chemical makeup of different varieties of these fruits, this allowed us to determine which compounds most influence flavor perception.

We found that the volatile organic compounds, or chemicals that form a gas, responsible for aroma are a big part of why people like a given variety. Specifically, we estimated that 42% and 56% of the overall preference score of a variety of tomato or blueberry, respectively, was associated with aroma.

Aroma also played a role in perception of sweetness – volatile compounds contributed 33% to 62% of how consumers rated sweetness.

Finally, we were also able to identify several chemical compounds that most contribute to this flavor and sweetness perception in tomatoes and blueberries.

Flavor plays an important role in which varieties of fruit people choose to eat. We believe that our models can help plant-breeding programs develop more flavorful varieties of fruit by making it easier to determine what objectively makes one variety taste better than another without needing to gather large consumer panels. By identifying exactly what influences how people perceive flavor, plant breeders can focus on optimizing for a specific chemical compound instead of a more subjective rating of flavor.

Because genetic and cultural factors greatly influence taste preferences, it’s likely that flavor preferences will also vary among different ethnic and geographic groups. While our results may be representative for the average U.S. consumer, they may not predict consumer preferences as accurately in Asia, for example. Breeding fruit varieties for specific markets might require additional testing of our flavor database.

Next steps include breeding fruits to increase the key volatile compounds that determine how much a consumer likes a particular variety.

How we do our work

Our lab groups have spent decades developing a framework to understand the genetics and biochemistry of fruit flavor. We conduct highly interdisciplinary research with psychologists, food scientists, geneticists, biochemists and plant breeders.

In our research, we start by identifying what chemicals in a fruit are responsible for flavor preferences. We then determine how the plant makes those chemicals and develop a genetic road map to control how the plant produces these chemicals. Finally, we use molecular breeding to produce flavorful varieties that consumers can fully appreciate.

Wisconsin predicts CHEESE will be the big winner on game day

APHIS enhances surveillance for SARS-CoV-2 and other emerging diseases