Home » What kind of cherry did Washington fell? 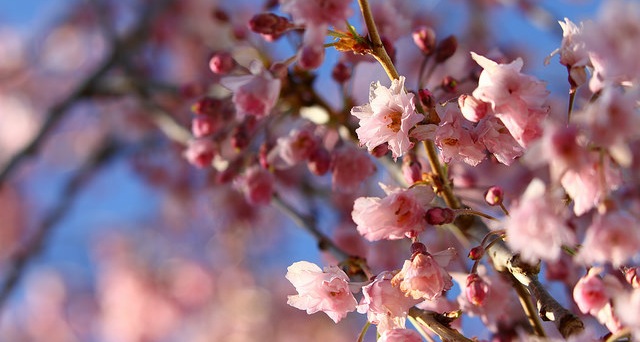 One thing is certain: Washington's famous cherry tree could not have been one of the ornamental types commonly planted these days. These non-fruiting cherries originated in Asia and were introduced into America only about 100 years ago. (Chris Waits, Flickr/Creative Commons)

WASHINGTON — Washington’s birthday is a good time to think about cherry trees. But rather than questioning whether George really chopped down the tree and then admitted to it, I find myself wondering what kind of a cherry it could have been.

(The story, incidentally, may be apocryphal. It was reported by Mason Locke “Parsons” Weems for his 1802 book, “Life of George Washington: With Curious Anecdotes, Equally Honorable to Himself and Exemplary to his Young Countrymen,” but has never been decisively confirmed.)

That cherry tree could well have been something akin to the sweet cherries we can buy or grow today. Sweet cherries (Prunus avium), sometimes called bird cherries or, in their wilder state, mazzard cherries, were among the plants ordered from Europe by the Massachusetts Bay colony in 1629. By 1650, there was a cherry orchard in Yonkers, New York, and before the end of that century, there were plantings in Rhode Island, Maryland and Virginia.

Those cherry trees became so abundant that by 1749 Peter Kalm wrote that “all travellers are allowed to pluck ripe fruit in any garden which they pass by, provided they do not break any branches; and not even the most covetous farmer hindered them from so doing.”

So it is not unlikely that Washington had a few sweet cherry trees planted at his farmstead along the shores of the Rappahannock River in Virginia.

The legendary felled tree also could have been a tart cherry (P. cerasus). Though native to the Caucasus Mountains, this tree has been grown in many different places. The ancient Romans knew eight different varieties, and by the 17th century, 24 varieties were being grown in England. Colonists in Massachusetts planted tart cherries (the variety “Red Kentish”), so this tree also may have made its way in the nursery trade south to Virginia.

CHERRIES THAT GEORGE COULD NOT HAVE FELLED

One thing is certain: Washington’s famous cherry tree could not have been one of the ornamental types commonly planted these days. These non-fruiting cherries originated in Asia and were introduced into America only about 100 years ago.

The most famous of these species is perhaps the Yoshino cherry (P. x yedoensis), which fringes the tidal basin in Washington, D.C.

Other Asian species introduced around the turn of the last century include the Higan cherry (P. subhirtella), the Sargent cherry (P. sargentii) and, perhaps the most widely planted today, the Japanese flowering cherry (P. serrulata).

Besides exotic introductions, the Eastern United States was full of wild, native cherry trees. Our native pin cherry (P. pennsylvanica, but also called bird cherry) is not much more than a bush. And if George had cut down a chokecherry (P. virginiana), another native species, his father probably would not have been riled. The tree doesn’t grow very large and the fruit, to quote William Ward (1634), “so furre the mouth that the tongue will cleave the roof.” Good wildlife food, though, both of these species.

Also abundant — I am looking at three large, wild trees from my window as I write — is our native black cherry (P. serotina), also known as the rum cherry. This species is sometimes called the American sweet black cherry, but “sweet” is a stretch. Fruits of some trees have respectable flavour, but it’s accompanied by bitterness. Colonists did eat the fruit or, more often, mix it with rum into a cherry liqueur.

Black cherry fruit is enjoyed by birds and some humans, and the tree can be attractive, especially in a few months, when the branches will be drooping with long, white racemes of flowers.

The best part of the black cherry tree is the wood, a hardwood which with some sanding and then oil or varnish takes on a soft brown finish, with just a hint of red.

Discovery may lead to new antibiotics

Pests and Diseases in the Vegetable Garden
May 19, 2022