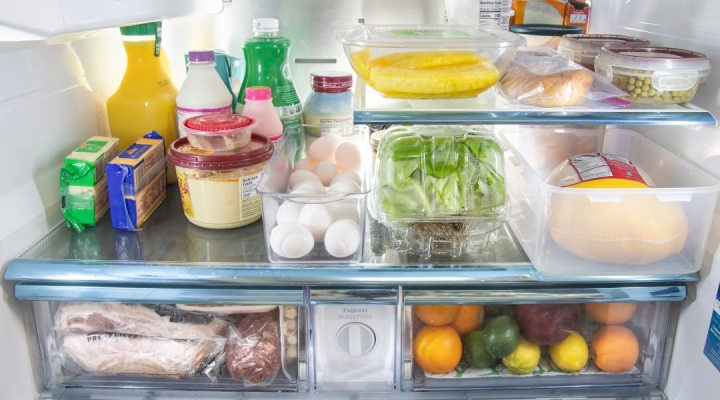 Listeria can live in any place where food is grown, packaged, stored, transported, prepared or served. Even the frozen aisle is not spared from listeria contamination. (U.S. Department of Agriculture, Public Domain)

DAYTON, Ohio — Bacteria do, and will, end up in food. Everyone eats – intentionally or unintentionally – millions to billions of live microbes every day.

Most are completely harmless, but some can cause serious illnesses in humans. Because of these potential pathogens, there is a long list of foods to avoid, including uncooked eggs, raw fish and unwashed fruits and vegetables, particularly for pregnant women. The foods themselves are not bad, but the same cannot be said for certain bacterial passengers, such as Listeria monocytogenes, or listeria for short.

This particular pathogen has found ways to indiscriminately get into our foods. While deli and dairy foods like cold cuts, cheese, milk and eggs are frequently culprits for causing listeriosis – the general name for listeria-caused infections – fresh vegetables and fruits have also been implicated.

The variety of foods responsible for U.S. listeria outbreaks in the past decade shows just how easily these bacteria get around. Listeria has turned up in hard-boiled eggs, enoki mushrooms, cooked chicken and, in 2021, packaged salad – twice.

Even the frozen aisle is not spared from listeria contamination. Contaminated ice cream in Florida was behind this year’s listeria outbreak, with 25 reported cases spanning 11 states since January 2021, according to an early August 2022 report from the Centers for Disease Control and Prevention. Those who fell ill ranged in age from less than 1 to 92 years old, and 24 of the cases have involved hospitalizations.

How can such a tiny organism bypass extensive disinfection efforts and wreak such havoc? As a microbiologist who has been working with listeria and trying to solve these mysteries, I’d like to share some insider secrets about this unique little pathogen and its strategies of survival inside and outside our bodies.

To prevent consumer exposure to listeria, the food industries follow stringent disinfection and surveillance guidelines from the Food and Drug Administration and the U.S. Department of Agriculture. Any detection of listeria triggers a recall of potentially contaminated food products.

Since 2017, there have been over 270 listeria-related food recalls. These are incredibly costly and can sometimes lead to fears in consumers as well as nationwide disruptions in food services. However, the recalls represent one of the few tools that the food industry has to protect consumers from foodborne infections.

Not all listeria strains are created equal. Genetic variations in listeria make a big difference in whether the pathogen ends up being involved in multistate outbreaks or simply hitching a ride harmlessly through our digestive tract. Essentially, based on the different methods used, listeria can be subtyped into different lineages, with some associated with outbreaks more frequently than others.

Researchers are investigating ways to tell these listeria strains apart, distinguishing the less harmful ones from those that are particularly dangerous, or hypervirulent. Being able to accurately identify them can help policymakers assess risks and make economically feasible decisions to improve food safety.

Listeria can live in any place where food is grown, packaged, stored, transported, prepared or served. Our research team has even found listeria in organic lettuce harvested from a backyard garden.

Listeria can survive and grow in temperatures as cold as 24 degrees Fahrenheit (-4.4 Celsius) because it has adapted to cold temperatures and developed tricks for overcoming cold stress. Considering the average refrigerator maintains a temperature range of 35 F to 38 F (1.7 C to 3.3 C), even when the food is stored properly at refrigeration temperatures, a harmless few listeria can grow to dangerous levels of contamination over time.

Listeria is also extremely versatile in adapting to and surviving all kinds of disinfection processes. When it grows on surfaces, listeria protects itself with a biofilm structure, a kind of coating that forms a physical and chemical barrier and prevents disinfectants from reaching the bacteria within.

Surviving the harsh conditions outside our body is only the first part of the story. Before even beginning to cause infections, listeria needs to get to the intestines without getting caught and destroyed by the body’s defenses.

Traveling and surviving passage through a human digestive tract is not easy for bacteria. Saliva enzymes can degrade bacterial cell walls. So can stomach acids and bile salts. Antibodies in our digestive tract can recognize and target bacteria for degradation. Moreover, resident gut microbes are strong competitors for the limited amount of space and nutrients in our intestines.

After digestion, the body’s intestinal movement sends traffic one way – out of the body. In order to stick around and cause infections, bacteria have to attach themselves and hang on against the bowel movement while competing for nutrients. Successful pathogens can establish these survival and attachment tasks while undermining our immune defenses.

Listeria that manage to stick around in our intestines can trigger an immune response. In healthy people, that might manifest as minor diarrhea or vomiting that goes away without medical attention.

However, those with compromised immune systems or immune systems temporarily weakened as a result of medication or pregnancy can be more susceptible to severe infections. In the absence of an effective immune system, listeria can invade other tissues and organs by creating an efficient niche for growth.

Listeria is what we microbiologists call an intracellular pathogen. In an infected individual, listeria can grow inside a cell and spread to neighboring cells. Hiding inside our cells this way, listeria avoids detection by antibodies or other immune defenses that are designed to detect and destroy threats that exist outside of our cells.

Once in stealth mode, listeria can move into and infect different organs. Wherever it goes, inflammation follows as the body’s immune system tries to go after the bacteria. The inflammation eventually results in collateral damage in nearby tissues.

In fact, deaths from listeria infections are often associated with the more invasive forms of the disease in which the microbes have breached the intestinal barriers and moved to other body parts. Life-threatening illnesses that can result from listeria include meningitis – inflammation around the brain and spinal cord that can occur when these microbes infect the brain – or endocarditis, infection of the heart’s inner lining. And in pregnant individuals, if the pathogen reaches the placenta, it can spread to the fetus and cause stillbirth or miscarriage.

As such, invasive listeria cases often have an alarmingly high hospitalization rate of more than 90% and a fatality rate that can reach 30%.

The scary statistics argue for a proactive and effective infection control to protect vulnerable populations, such as elderly or pregnant individuals, from listeria exposure.

If you have risk factors and want to take extra precautions, maybe turn that unpasteurized cider into a hot, mulled cider to kill the bacteria with boiling and simmering. Eat soft cheeses on foods that get cooked, such as pizzas or grilled sandwiches, instead of eating them cold, straight from the refrigerator. Essentially, use heat to bring out the delicious flavors and eliminate potential listeria contamination in your food.

Ultimately, it’s nearly impossible to live in a completely sterile environment, eating food devoid of all living microorganisms. So enjoy your favorites, but stay up to date with ongoing recalls and follow the expiration guidelines, especially for ready-to-eat food.

See it? Squish it! Fighting the invasive spotted lanternfly