Subscribe
Home / National / What do COVID-19 and climate change have in common? 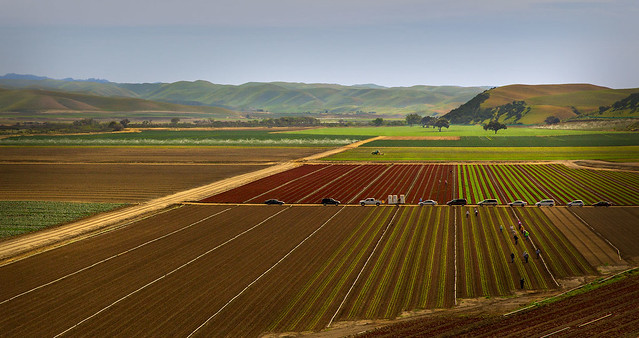 SACRAMENTO, Calif. — With the novel coronavirus pandemic, millions of Americans have seen empty grocery shelves for the first times in their lives. We have seen how essential farmers are to a safe food supply, and how they innovate rapidly to meet demand as their markets suddenly shift. But in the world’s largest agricultural state, some of the most productive farmland and ranchland are being developed without consideration for future food supply needs, environment and public health concerns.

This agricultural land loss is not only threatening the nation’s food security, it’s being done in an almost invisible manner that’s often overlooked, according to “Farms Under Threat: The State of the States,” a new report by American Farmland Trust. And it is having a devastating effect on California’s ability to reach its carbon neutrality goals and support cleaner air quality standards for public health.

“California is the nation’s leading agricultural state, growing more than a third of vegetables and nearly two-thirds of fruits and nuts eaten in the United States,” explains Kara Heckert, AFT California regional director. “The state exports many agricultural commodities not grown anywhere else. It’s not in our national interest for this vital farmland and ranchland to be paved over, fragmented or converted haphazardly into residential, commercial, energy and industrial uses.”

The new AFT report shows the extent, location and quality of each state’s agricultural land and tracks how much agricultural land has been converted in California using a sophisticated data–mapping system. It identifies the most important farmland and analyzes its productivity, versatility and resilience. This allows AFT to identify the “Nationally Significant” agricultural land best suited for long-term, intensive crop production, especially vegetables, fruits, nuts and staple grains.

The report also reviews the six most widespread programs and policies nationally for protecting farmland, and compares California against the rest of the country, with the Golden State ranking in the top 12 overall. Despite advances, much more must be done.

In contrast, Delaware earned the top score among states for average funds spent per capita per person/year at $6.03, and North Dakota developed 4.1 acres of agricultural land per new person, according to AFT’s report.

This relatively low investment in farmland protection occurs despite California’s working landscapes providing more than $333 billion in sales, 1.5 million jobs and $85 billion in earnings in 2018. The agricultural sector accounted for the lion’s share at $264 billion, according to University of California Agriculture and Natural Resources’ “California’s Working Landscapes” report in November 2019.

The threat is more than just urban sprawl. California’s prime agricultural land is disproportionately threated by LDR, a more insidious kind of development identified by AFT researchers. About 32% of California’s farmland acreage was converted to LDR, while 68% of conversion was to UHD.

“We all recognize urban sprawl, but LDR is a serious, overlooked problem,” explains Kara. “LDR is where you see housing developments popping up around agricultural fields. They aren’t suburban, they are exurban and often are large–lot developments. In California, LDR is 25 times more likely to be converted to UHD use than other agricultural land. It’s not immediately visible to policy–makers, which makes it challenging to develop an adequate policy response.”

An acre of agricultural land in California emits 58 to 70 times less greenhouse gases than an acre of developed land, according to AFT and UC Davis research. If the annual loss of farmland to urban development in California was reduced by 75% by 2050, that could reduce greenhouse gas emissions equivalent to removing 1.9 million cars from California roads annually, which would have a significant impact on air quality.

When several governments announced plans to lower environmental standards or other related measures, David Boyd, UN special rapporteur on human rights and the environment, spoke out about the effect of environmental pollutants, especially communities in vulnerable areas.

“The science is clear,” he said. “People living in areas that have experienced higher levels of air pollution face increased risk of premature death from COVID-19. Similarly, access to clean water is essential in preventing people from contracting and spreading the virus.”

As Secretary Karen Ross of California Department of Food and Agriculture explained in Civil Eats recently, “When we nourish our citizens to build their immune systems to be healthy, that’s got to be one of the most important things that we can do, and when we can purchase within our local communities that helps the community, it helps families, and it helps our economy rebound.”

Policies and Programs to Conserve California Agricultural Land
AFT is focused on several state and regional approaches to stem further agricultural land loss in California. The state will have a budget shortfall of $54.3 billion because of the economic devastation wrought by the coronavirus, Gov. Gavin Newsom’s administration announced in early May. Despite these financial constraints, AFT will accelerate our work together with our California partners to strengthen and/or adopt a suite of coordinated policies and programs to protect farmland with the following priorities:

On-The-Ground Response in the Nation’s Top Farming Region
In the San Joaquin Valley, the nation’s agricultural powerhouse with more than 300 crops and livestock products, AFT has a direct response and action plan to stem farmland loss there. The region is among the state’s fastest growing, with development happening on the highest quality agricultural land, according to AFT’s research.

“Water scarcity, a changing climate, new regulations, slashed income due to pandemics, and a growing population are just some challenges farmers and ranchers face here,” says Kara. “Only four in 10 acres of the Valley’s agricultural land was determined to be of the highest quality. And only 9% of the Valley’s irrigated farmland is high quality and experiencing low-water stress.”

As many as 323,000 acres are projected to be converted into low-density urban and rural residential uses by 2050 in the San Joaquin Valley, according to supplementary spatial analysis research conducted 2015 to 2018 with AFT and Conservation Biology Institute. In fact, 55% of the Valley’s high-quality farmland has a high risk of development, according to AFT.

AFT is spearheading farmland protection, regenerative agricultural methods, groundwater recharging and water conservation throughout the region. These efforts will serve as a model for scaling up these programs statewide.

How to ensure quality wheat