Subscribe
Home / Just Me, Kate / What could have been… 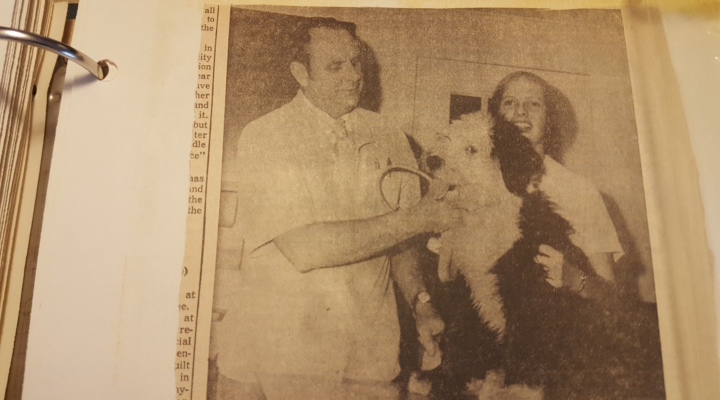 For most of my life, up until the age of 21, it was all about becoming a veterinarian when I grew up.

It was in my blood, veterinary medicine was the family business on my father’s side.

It was my first job. I was Riverside Veterinary Hospital between the ages of 15 and 20.  What pride I took in Brad’s practice, hoping that someday I would buy it from him when he retired…I loved working there, and despite my young years, most days I felt like an equal.  Brad and Ann treated me so well. And of course it was W, who got me the job.  W was so good like that, always connecting people.  Thank you W!

I worked Mondays and Wednesdays after school and on Saturdays. I walked dogs, disinfected discharge cages and kept the laundry moving. Cleaning surgery packs, wrapping them, and getting them in the autoclave was also on the list if it had not been done before my arrival.

In the evenings and on Saturdays there was a steady rhythm to the office hours.  I ran heart-worm tests and fecals, prepared vaccinations, and restrained dogs and cats during exams and procedures.  I was great with the Nolvasan scrubs for wound care and would take on the challenge of pilling a cat that tended to be contrary. Sometimes it took two of us, but not very often.

Trimming dog nails was not my forte.  I could do it, but the quick would come a bit too fast, and hence I always seemed to get a gusher. But Angela on the other hand, she was the master.  As long as I could hold it, which I usually could, we always managed to get it done.

When a hit-by-car (HBC) came in, the whole balance tended to be thrown off a bit and how we recovered from the emergency situation usually depended on whatever else had already come in for the day and how booked we were for appointments.   And we just loved spring when the porcupines came out of hibernation. Lots of quills to extract from paws and muzzles.

I will never forget the evening that Brad and I had a particular “put to sleep.” I don’t remember too much about the dog, but what I do remember is Brad’s tear that fell on the table as I held the dog, and he found the vein.  Then the quiet release and calm once it was over. No words, just tears, from all 4 of us in that tiny exam room on that dark evening–nothing more to say, only to feel.

We helped their beloved dog begin its next journey. And we did our best to comfort two gentlemen who would start the healing process from the grief after losing their loyal companion.  Their paths went separate ways on that night, in our clinic, with the help of our hands.

It was moments like that, in a weird way, that I got my high and charge out of veterinary medicine.  Yes, I liked the animals, but it was their humans that I loved and who I wanted to nurture through all of the happiness and heartache that our four legged companions gave to us.

After tough appointments all we could do was press on to the next case, hoping that it was going to be something a little less emotionally draining.  Did anyone say puppy!?!

When animal care was done and appointments were caught up it was the steady filing of patient records, or the folding of towels that I would go to.  On occasion a client would come in and recognize my last name and ask, “Are you any relation to Doc Cilley?”  I would smile and nod and say, “Yes, which one?” They were either referring to my grandfather or my great grandfather, and of course they usually knew my dad too.

My father chose not to follow in the family trade, but instead chose the course of my mother’s family business. He certainly knew how to neuter a cat, give a shot, and clean a kennel.. it was the life that he grew up in.  And we shared that.

For the first year of my employment, my parents would have to take me to and from work because I didn’t have my license yet.  Like farming, there was a probable hour that I would get done, but there were many, many evenings when that mark was not hit. Thank you dad for helping finish the last of the cages or for “Rocalling” the kennel floor for me while I finished mopping in the appointment rooms.

And then, once I was driving on my own, there were Sundays…

Sunday was usually my solo day at the clinic, caring for the boarders and treating the sick animals that needed to stay over for the weekend.

As a teenager it was not hard for me to get out of bed and go walk dogs, and treat cats.  It was on those Sundays that I felt like the practice was my own, taking on many responsibilities, helping the vets with an emergency if it happened to come in during my morning or evening chore time. Back in those days veterinarians still had their beepers and the concept of a centralized emergency clinic hadn’t even been thought of, at least in our area. Practicing veterinary medicine was much more personal back then, and I liked that.

Depending on what we had for cases in the clinic on any given Sunday I would see the vet on-call in the morning, or at least talk to them on the back-phone line about the cases that were in the clinic.

As a side note, our back-phone line was hidden in the stairwell going down in the basement. Every practice had one, it was the only way that people got through who weren’t clients. Remember this was well before cell phones and the phone wasn’t cordless either so if you were talking on it you could either choose to sit on the stairs covered with the rust colored wall to wall carpeting (the details we remember) or for me, on those Sundays, I would stand and go through the records on the counter top that abutted the wall of the stairway while talking to the vet.  I would willingly take my orders and carry them out–glowing more with every additional responsibility that was given to me. How I couldn’t wait to be a Dr. Cilley…

And then there were the farm calls… for next week.

And then there were farm calls...