Home / Indiana / What are your bedding options?
A new user experience is coming! We'll be asking you to login to your Morning Ag Clips account March 1st to access these new features.
We can't wait to share them with you! Read more here. 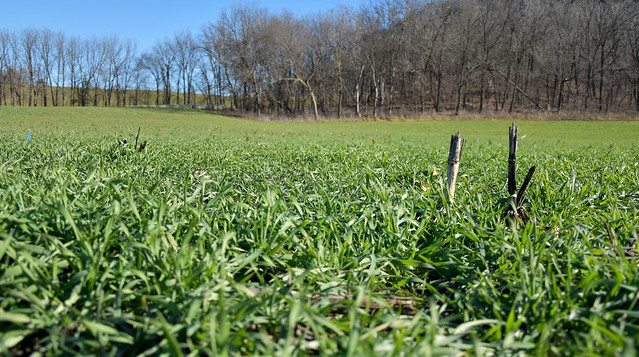 The two most common beddings, wheat straw and sawdust, are both already in short supply across the state. As you weigh your bedding options, be sure to consider alternative agronomic crop fodder or cover crops as a bedding source. (Jason Johnson, Flickr/Creative Commons)

COLUMBUS, Ohio — Wheat fields are finally turning green, as we do stand evaluations (https://agcrops.osu.edu/newsletter/corn-newsletter/2019-07/estimating-wheat-yield-stem-counts) many producers are weighing poor stands versus their need for livestock bedding. As you weigh your options be sure to consider alternative agronomic crop fodder or cover crops as a bedding source. The two most common beddings wheat straw and sawdust are both already in short supply across the state.

The first harvestable option is to look at cover crops you or a neighbor have planted. One option that has gained some popularity is precut rye straw. If your wheat stand is present but not thick enough to take to head you could follow these same principles making precut wheat straw then planting soybeans a month earlier for improved yields over double crop soybeans.

There are two options when making precut straw, both of them take place just after the head emerges but before pollination and seed formation. The most common process is to spray the rye with Glyphosate and let stand in the field as it dries and bleaches yellow. The PHI for cereals on some glyphosate products is 7 days between application and grazing or harvest. The best rye straw comes from having a couple tenths of rain on the rye removing the wax from the plants. Once plants are dry, mow and leave lay for a day then rake and bale.

The other option is to mow and let lay in wide windrows until dry for baling. Usually the rye needs tedded at least twice in order to get it dry. Average yields for rye straw is 1 ½ – 2 tons per acre, it is recommended that you do not use spring nitrogen fertilizer because it causes rye to lodge if rates are too high. Seeding rates of one bushel or less tend to allow for more air movement within the rye helping it dry faster. While this is becoming a more common practice with rye, it could also work with wheat and allow for earlier soybean planting. Remember we will be removing some phosphorous and potassium in the straw.

More producer are moving to baling residue that is left over after harvesting corn and soybeans. This can be a great bedding source but also removes winter soil erosion coverage. One option for this maybe to bale the residue then plant a cover crop to protect the soil from erosion and maintain organic matter. While we may bring the residue back in manure, the cover crop helps prevent erosion. Even if it is oats that does not over winter, the cover helps avoid erosion. On average one ton of residue is produced per 40 bushels of corn or 30 bushels of soybeans. This leads to about 2 tons of soybean stubble and 4-5 tons of corn stalks to harvest.

Soybean stubble is dusty but can be fairly easy to bale as long as you don’t have green stems. Often when making soybean stubble straw you remove the spreader to make windrows, but leave the chopper on either slowing it down or removing the knifes so that it is sized but not dust. This creates windrows that can be baled within hours of combining. Making it easier to bale than corn stalks. Soybean residue does wear more on balers than wheat straw but is gentler than corn stalks. One other challenge is that soybean stubble bales need stored inside so that that do not get wet and rot.

Corn stalks are a very common feed and bedding option, the challenge is with falls like this past year it rains every two days and corn harvest is delayed, it can be difficult to make dry corn stalks for bedding. Corn stalks are much harder on harvest equipment than wheat straw, some older square balers struggle to make stalk bales and need the knotters cleaned more often than in other crops. Some producers make corn stalk bedding by windrowing the cobs, leaves, and a few stalks that come out of the combine. This leads to low tonnage yields and more wear on the pickup but less erosion. The more common method is to use a flail mower to mow the stalks and chop them, a bush hog can work but does not size stalks as well. After stalks are mowed and dry they are raked and baled.

With both corn stalks and soybean stubble nutrients are removed from your field, see the chart below to calculate nutrient removal. It is also important to make sure your bedding will be able to keep your barn dry, a study from Canada finds that wheat straw actually holds less pounds of water per pound of bedding than other crop residue.

There are many other alternative bedding sources some of which are more expensive. Some are also tasty but have low digestibility leading to decreased feed efficiency. Most organic materials can be used for bedding including sawdust, shavings, shredded/chopped paper, barley and oats straw, over mature hay or waterways and buffer strips if not in CRP. Just because you need straw doesn’t mean it will be a profitable decision to keep a poor wheat stand that will have low yields and low straw tonnage. One last option is to purchase straw from out of state the most risky part of this option is potential for importing noxious weeds onto your farm that are chemical resistant. Do not let your bedding needs be the reason you lose money on your wheat acres.