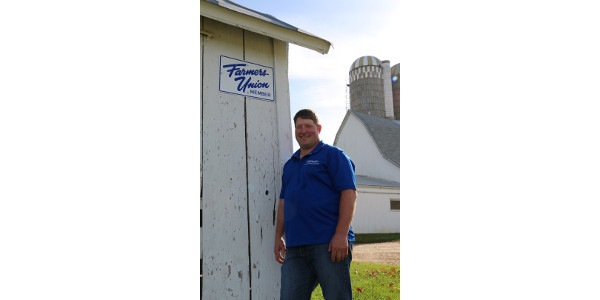 “Our thoughts and prayers go out to all of the farms who recently received this unwelcome news,” said WFU President Darin Von Ruden. “As a dairy farmer myself, I know exactly how devastating it would be to receive such a letter.” (Courtesy of Wisconsin Farmers Union)

CHIPPEWA FALLS, Wis. — In the wake of recent news that several Wisconsin dairy processors, including Grassland Dairy Products and Nasonville Dairy, have abruptly terminated milk contracts with farmers, Wisconsin Farmers Union wishes to express sympathy for affected farmers.  “Our thoughts and prayers go out to all of the farms who recently received this unwelcome news,” said WFU President Darin Von Ruden. “As a dairy farmer myself, I know exactly how devastating it would be to receive such a letter.”

“With nearly every processor in the state already at capacity, farmers have almost no other options for selling their milk,” Von Ruden continued. “It is nearly certain that these actions by processors will result in dairy farm closures. A cow is a mammal, not a machine – you can’t just turn her milk production off with a switch and wait for better market conditions.”

Von Ruden expressed his disappointment that farmers were given so little notice of the terminations. Nasonville Dairy gave farmers just two weeks of notice while Grassland gave four weeks.

“In the case of Grassland, who is in a better place to absorb a shock in the supply chain – a family dairy farm or a multi-million dollar corporation?”  Von Ruden also disputed Grassland’s assertion that the terminations were necessary because of a “sudden” change in Canadian dairy policy.  In fact, Grassland has known at least since last November, and probably as early as two years ago, that potential changes in Canada’s ultra-filtered milk regulations were likely. In November, Governor Scott Walker circulated a guest column addressing the Canadian pricing policy designed to discourage U.S. exports of ultra-filtered milk.

“The affected farmers would be in a much better position today if they had received advance warning from Grassland months ago to curtail their production,” Von Ruden said. “We encourage other dairy processors to be more forward-thinking in their communications with their farmers.”

Von Ruden also noted that at the same time Grassland is dropping family dairy farms in Wisconsin from its rolls, it is also seeking to build a corporate-owned 5,000-cow dairy in Dunn County.  “In light of this new development, we hope that Grassland will reconsider its Dunn County CAFO project,” he said.  “Having many independently-owned dairy farms is better for the economy and better for our rural communities than one vertically-integrated supply chain.”

Von Ruden remarked that this week’s events should be a wake-up call to all dairy farmers, and encouraged dairy farmers to advocate for the following actions by their processors, by the state of Wisconsin and the federal government to stabilize dairy markets and re-build a dairy industry that works for family farmers:

Dairy Farmers who received a termination letter from their dairy processor or handler are encouraged to contact the DATCP Farm Center at 800-942-2474 for assistance in locating potential new buyers.

Von Ruden noted that others in the dairy industry are currently calling on the U.S. government to push Canada to rescind its new ultra-filtered milk regulations, potentially by challenging them at the World Trade Organization. On this point, Von Ruden sounded a note of caution. “Some are saying that Canada has given unfair support to its own dairy industry through these new rules.  The other point of view is that Canada  is simply trying to stabilize its domestic dairy industry by setting laws within its own borders. Shouldn’t governments have the right to do that?  I don’t want an unelected international body deciding our domestic policies, and I don’t think most other dairy farmers – whether Canadian or American – want that either.”

He concluded, “We are at a critical turning point in the U.S. dairy industry.  We can either continue with this increasingly volatile roller-coaster ride that has been brought on by changing international trade policies and fluctuating currency values, or we can decrease our over-reliance on international markets and harmonize domestic supply with demand. In light of this week’s unfortunate events, Wisconsin Farmers Union thinks it’s time to pursue a new strategy to achieve more stable markets for America’s dairy farmers.”

Wisconsin Farmers Union, a member-driven organization, is committed to enhancing the quality of life for family farmers, rural communities, and all people through educational opportunities, cooperative endeavors, and civic engagement. For more information visit www.wisconsinfarmersunion.com.