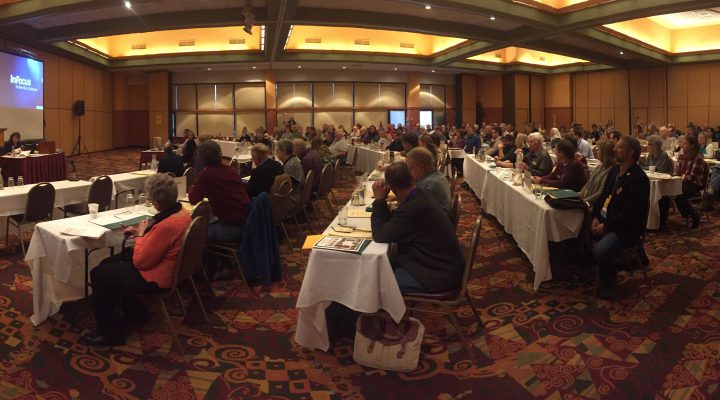 “Wisconsin Farmers Union believes that rural America works best when we work together,” said WFU President Darin Von Ruden, a dairy farmer from Westby. “Many of our policies this year look at how we as family farmers can stand up for our values of family, cooperation, community and civic engagement.”

The following were among the Special Orders of Business selected for 2017:

DAIRY POLICY REFORM: Wisconsin Farmers Union’s Dairy Producer Survey, conducted this past fall, indicated that dairy farmers in Wisconsin were losing nearly a dollar per hundredweight in 2016. Given that milk price volatility has increased dramatically since the mid-1980s, due to a combination of diminishing government price support levels and loosened regulations on speculation in commodity markets, among other factors, WFU members resolved that Congress overhaul or eliminate the Margin Protection Program and replace it with a policy that makes price stability the top priority for dairy policy.

CAMPAIGN FINANCE REFORM: In the wake of the Citizens United Supreme Court decision that opened the floodgates to unlimited campaign spending, WFU calls upon the State Legislature to pass an advisory referendum to be placed on the ballot allowing voters to reaffirm their view that corporations are not people, and money is not speech.

NONPARTISAN REDISTRICTING: In light of the recent federal court ruling striking down Wisconsin’s legislative district boundaries as unconstitutional, WFU supports the creation of a nonpartisan entity to perform all future legislative redistricting for city, county, state and federal offices in the state of Wisconsin in order to end gerrymandering, restore competition to electoral races, and ensure that voters are electing their representatives, rather than the other way around.

A FAIR AND FISCALLY SOUND FEDERAL TAX POLICY: WFU members expressed concern over President Trump’s tax plan, which would cost an estimated $9.5 trillion over the next decade. WFU calls for significant cuts to military spending to offset the lost tax revenue or a reevaluation of the wisdom of deep income tax cuts. WFU opposes cutting taxes if it will result in cuts to bedrock government programs like Social Security, Medicare or Medicare, or if it will contribute to deepening of the already-unsustainable federal deficit.

USDA GUIDANCE ON COVER CROPS AND CROP INSURANCE: Cover crops have become an accepted and highly-regarded agronomic practice, which farmers have increasingly been using to improve water quality, crop productivity and nutrient efficiency. WFU called upon the Risk Management Agency to eliminate the confusing Cover Crops Termination Guidelines and replace them with the Good Farming Practice (GFP) determination process, so that farmers will not be deterred from using cover crops.

SUPPORT FOR GROUNDWATER TESTING AND MAPPING: In light of growing awareness of groundwater contamination around the state, the lack of complete data on groundwater quality and mapping, and given the universal need for clean, safe drinking water, WFU encourages the state legislature to provide additional resources for counties to plan and implement groundwater testing and mapping that will lead to better understanding, protection, and utilization of our groundwater and drinking water supplies.

Among other language adopted by delegates was:

“WFU will continue to expand our efforts, develop and defend solid policy alternatives, and strengthen our voice for family farmers and rural Wisconsin,” Von Ruden said.

Wisconsin Farmers Union members will take the policy they drafted at the convention to the Capitol Feb. 28 for Farm and Rural Lobby Day, where they will visit with policymakers about the issues impacting family farms and rural communities. The updated WFU policy will be online soon at www.wisconsinfarmersunion.com.