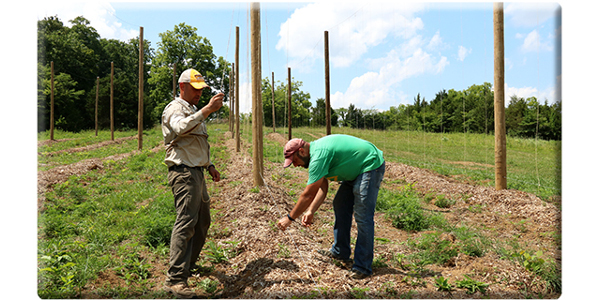 Birch Bragg, left, and Joe Kuosman string up a hop trellis of baling twine for the vines to grow on. (Kentucky Department of Agriculture photo)

PEAKS MILL, Ky. — West Sixth Brewing Company co-owner Joe Kuosman’s goal is to make a new variety of craft beer using only ingredients that are grown or that originate in Kentucky.

The Lexington-based Kentucky Proud brewer took a big step in that direction in June, planting 325 hop vines on a one-third-acre “hop yard” on a sunny hillside off Shadrick Ferry Road north of Frankfort.

“Our goal is to create a great state beer,” Kuosman said during a mid-July visit to the farm. “I’d love to produce a beer with 100 percent of its ingredients from Kentucky.

“We have the hops, water, and yeast,” he added. “But most of the barley we use doesn’t grow well in Kentucky, so that’s the next step.”

“Sourcing as local as possible isn’t at all a new concept, just rediscovered,” Madison said. “Not too long ago, locally sourced was the only way, but modern transportation quickly changed things, resulting in products that were often of great quality but suffered from a degree of homogeneity.

“With this local resurgence, we hope to see a beer from West Sixth comprised solely of Kentucky ingredients.”

Kuosman said the Kentucky Proud marketing program has been “a great thing for us to be associated with.

Birch Bragg, who manages West Sixth’s hilly 120-acre Franklin County farm where the hop yard is located, said the four-week-old hop plants were growing about an inch per day.

“Our main goal is for them to survive until next year,” Kuosman said, noting the perennial hop plants will grow for 25 years.

By harvest time in late August or early September, Bragg predicts that West Sixth will reap about 100 pounds of dried hops. Next year, he expects the maturing plants to triple production to about 300 pounds.

When they are fully mature 3-year-old plants, Bragg predicts they will yield about 500 pounds, based on the ratio that mature hop plants produce about 1,500 pounds per acre.

Two years from now, Kuosman said, the fast-growing vines will climb the 18-foot poles posted along each row of the hop yard, strung together with lines of baling twine to create a trellis, enabling the vines to grow horizontally as well.

Hops are the “flowers” of the Humulus lupulus plant.

“Hops look like tiny green pine cones and are about the size of big raspberries,” Bragg said.

“All beer has hops,” Kuosman said. “They give beer its bitterness. The more hops, the more bitterness.

“It was originally added to beer because of its natural anti-microbial properties. Back in the day, they would boil the brew to kill bacteria, then add hops to inhibit bacterial growth.”

A popular type of craft beer is India pale ale, or IPA. It is particularly “hoppy” because the type was originally brewed in England and shipped halfway across the globe to British troops stationed in India during the days when wind, not steam, powered ships.

“More hops were added to IPAs to preserve it for a long boat ride,” Bragg said.

Almost all hops grown in the Northwest

Bragg said hops were a big crop in the Midwest and Southeast before Prohibition.

Now, 30,000 of the nation’s 31,000 acres of hops are grown in the Pacific Northwest. Hence the geographic names of the two varieties grown in West Sixth’s hop yard: Cascade, a mountain range in that area, and Chinook, a salmon river in Washington.

“Chinook seems to be doing better in our climate,” Bragg said. “At full maturity, hop vines can grow up to a foot a day.

“There’s not a tremendous amount of hops grown in the state yet. The largest hop yard in Kentucky is five acres in Shelby County. Before that, it was one acre.”

Even at full production, Kuosman said, a third of an acre would not nearly supply West Sixth with its appetite for hops.

“We use 500 pounds of hops of all different varieties every two weeks, so the purpose of this hop yard is not to supply us with all the hops we need,” he said. “We’re in the beer-making business, not the hop-growing business.”

Kuosman envisions the hop yard as a place where individuals and families could visit to find out about how craft beer is made and provide a rural venue in which to sample it, similar to Kentucky’s approximately 70 small-farm wineries.

“Like the farm-to-table movement, where people can see where their food comes from, here you can see where your beer is coming from,” Bragg said.

Installing the hop yard was the first step. West Sixth also has a crop of hard cider apples growing on another hillside nearby, and the farm is in the process of adding beef cattle to its operation.

Already, the Kentucky Mountain Bike Association has created trails on the farm.

“We could have a hop harvest party for a small brewing operation out here,” Kuosman said. “I’d like people to come out, walk the grounds, and see what a hop trellis looks like.

“We have several ponds, so people could bring their poles for fishing. People could have picnics. We could have a live band come out and play. We’ll have cattle and chickens, so we could host farm-to-table dinners.

“We view this as a long-term agritourism project,” Kuosman said. “Thirty years from now, we would like to be making things bigger and better.”