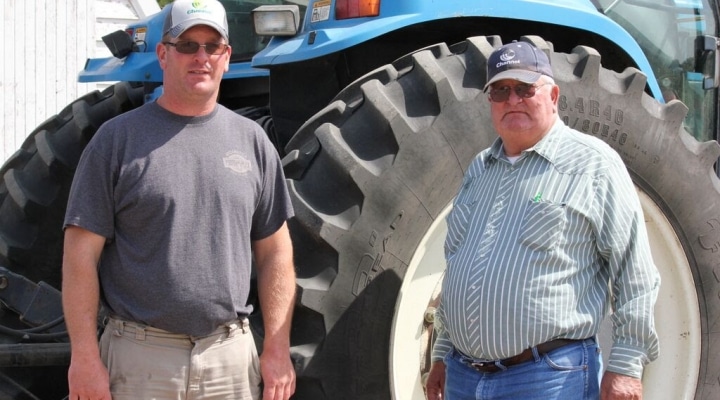 Since 2017, Kolousek worked to more than double Jerauld County’s membership.

A third-generation Farmers Union member and fifth-generation farmer, Kolousek says many of the family farmers he asked, joined Farmers Union for the same reason he and his wife, Amber became actively involved.

“We started getting more involved around 2015 after the collapse of the cattle markets because I started paying more attention to the outside influences impacting the markets,” explains Kolousek, a cow/calf producer who farms with his parents, Dick and Janet. “I realized if we’re gonna have a future out here, we needed to try and get things changed. I’m still skeptical about the markets, but at least I know Farmers Union is fighting for policy that could have a positive impact.”

In 2018, Kolousek was elected to serve as Jerauld County President. When he reviewed the membership list, he saw a need. “The average age of our members was getting up there, I knew for the future health of our organization, we needed to get some more younger farmers involved.”

Kolousek began intentionally visiting with friends and neighbors. “I chose to visit other producers who I knew would be interested in being a part of Farmers Union because the organization stands up for cattle producers.”

Jerauld County hosted their annual business meeting and then everyone enjoyed an evening of socializing together. More than 50 farmers attended. The Kolouseks invited some non-members that evening who also joined.

When asked why he thought so many attended, Kolousek replied: “Who wants to drive 15 minutes into town in the middle of January for a meeting, when they can meet up in August and enjoy a grill out?”

He added that the 2019 Annual Meeting reminded him of stories his dad tells of how Farmers Union meetings used to be when he was a kid. “Everyone would get together for the meeting and then they would have a big picnic or a card party after.”