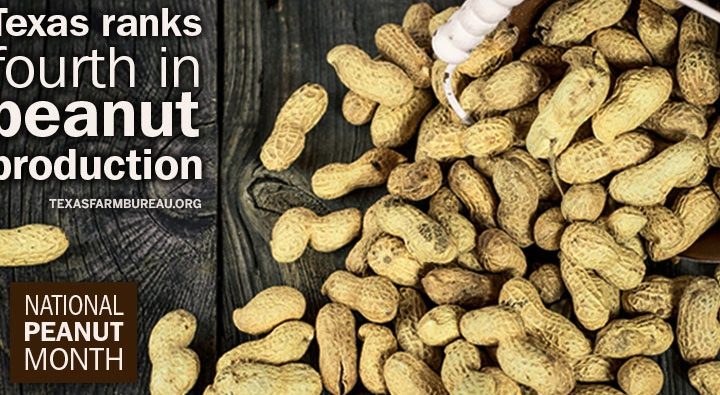 Salted. Fire roasted. In a cookie or inside chocolate. Stuffed between two slices of bread. Or in a Coke. Peanuts are a Texas, and American, staple. (Courtesy Photo)

AUSTIN — It’s a nutty month. And no, not because our Texas weather can’t decide if it should be winter, fall, spring or summer. But because it’s National Peanut Month.

And Texas is the fourth largest peanut-producing state in the nation.

Salted. Fire roasted. In a cookie or inside chocolate. Stuffed between two slices of bread. Or in a Coke. Peanuts are a Texas, and American, staple.

And we get to enjoy them all year long. Especially during the upcoming baseball season, where peanuts are a major league snack.

Almost 90 million jars of that tasty snack are sold annually. That’s about 3 jars of peanut butter per second!

With those numbers, it’s no surprise that peanut butter is the leading use of peanuts in the U.S. But they’re also used as an ingredient in other products like shaving cream, soap, cosmetics, shampoo, rubber and detergent.

The shells are used in livestock feed, wallboards and cat litter.

And did you know two peanut farmers have been elected president of the U.S.? That’s right. Thomas Jefferson and Jimmy Carter were both peanut farmers.

But the most surprising fact about peanuts? They’re not actually a nut. They’re legumes—like beans and peas.

What’s your favorite way to eat this tasty snack? Share with us in the comments!

Be a part of Angus history