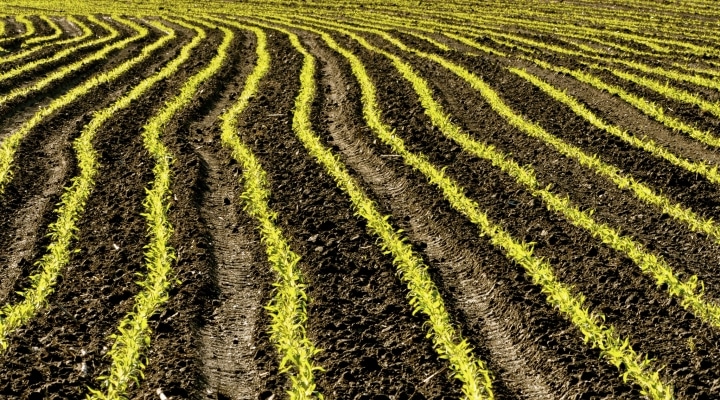 After a long dry spell in April and May, farmers are welcoming recent rains—but some are still contending with the effects of dry weather on their crops. (photo by Putneypics, creative commons/flickr.com)

BROOKNEAL, Va. — After a long dry spell in April and May, farmers are welcoming recent rains—but some are still contending with the effects of dry weather on their crops.

The recent rains and thunderstorms have provided relief to some farmers who were facing several weeks of little to no rain. According to the June 14 crop report from the National Agricultural Statistics Service, topsoil moisture is at an adequate level for 77% of Virginia, a positive change from previous reports.

“May was really dry, but June has been better,” said Monte Mason, a farmer in Charlotte County who grows feed corn, wheat and soybeans. “We’ve got some beneficial rain, and we’ve gotten the rest of our crop in the ground now.”

Mason said his corn and soybeans both “look really good right now,” but he’s worried about the impact of earlier dry weather on his wheat crop. According to the NASS report, 48% of winter wheat is in fair, poor or very poor condition, and 52% is in good or excellent condition.

“The wheat is not going to be great, I don’t think,” Mason said. “I think it’s going to be a little on the light side. We haven’t been out there to harvest, but we’re getting close. What I checked early, it looks like the grain is going to be really small.”

Also in Charlotte, farmer Bobby Bradley said the dry weather caused his soybeans to be planted three weeks late. He’s since received some rain, but “it’s been pretty spotty. Sometimes I get lucky and catch a shower, and sometimes I don’t.”

The NASS report noted that 57% of Virginia’s soybean crop is in good or excellent condition, and 43% is in fair, poor or very poor condition.

“At this point in time, I’m not going to have any yield reduction yet,” Bradley said. “They look good for the length of time they’ve been in the ground. It could still turn out to be a bumper crop year. It just depends on the weather for the rest of the year.”

Virginia is known for its variable climate. Robert Harper, Virginia Farm Bureau Federation grain division manager, said conditions in many parts of the state are improving, as heavy rains in areas like the Northern Neck and central region have added enough moisture in the soil now to carry crops for a couple weeks.

“We’ve seen much-needed rain since Memorial Day weekend,” Harper said. “Farmers will tell you they’ll never turn a rain down in May, June, July or August. They’re going to want all they can get.”

Harper added that dry spells are preferred earlier in the growing season instead of later.

Sweet corn starting off slow, but farmers optimistic for the season

Cantaloupe season off to a sweet start for Va. farmers
July 22, 2021

Call for backup when livestock is on the loose
July 19, 2021