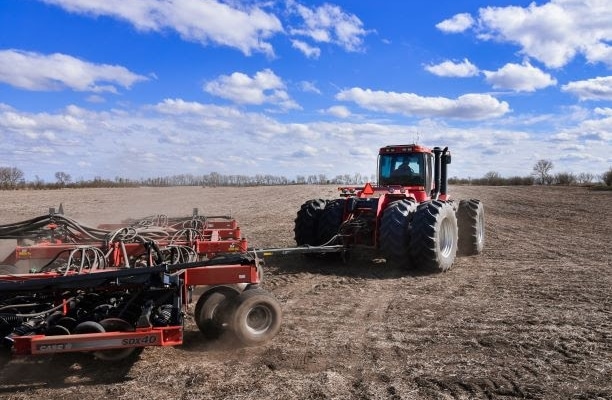 Nationwide, 11 percent of the spring wheat crop has been planted, compared to 6 percent on average. South Dakota is most advanced with almost one-third of their crop in the ground. In North Dakota, producers have planted about 8 percent of their spring wheat. (Courtesy Photo)

In North Dakota, producers have planted about 8 percent of their spring wheat.  Conditions have been extremely dry, with the bulk of the state classified as being in a severe to extreme drought situation.  Many producers report little to no subsoil moisture and have been planting in very dry soil and will need some moisture to help germinate the crop and support uniform stands and good early growth.  The past week has brought some precipitation, but only a small area saw measurement of an inch or more.  Most of the state saw much smaller amounts, with some areas in the western portion of the state seeing little to no measurable precipitation.  Still, the recent precipitation is certainly welcome, and instills some hope early in the season, although much more will be needed to alleviate drought concerns.  This week temperatures will be much cooler, and snow is falling, primarily in the northern two-thirds of the state.  At this point, any form of moisture is welcome.  Planting will likely be minimal this week with the cooler temperatures and chances of precipitation.

Durum producers are facing the same conditions – very dry soils and minimal precipitation so far this spring.  North Dakota producers have planted about 3 percent of the intended durum acres.  While there has been some minimal precipitation in the northwest portion of the durum growing area, producers in the southwest have missed out almost completely.  With 80% of the state reporting subsoil and topsoil moisture levels as short to very short, timely precipitation this spring will be needed.  The chart below shows rainfall received over the last week.

The USDA Prospective Plantings report was released March 31.  U.S. spring wheat acres are projected at 11.7 million, down 4 percent from last year.  Acreage projections by state are below:

Drought may facilitate spread of noxious weeds
May 14, 2021

Sacrifice area may save grazing resources
May 13, 2021