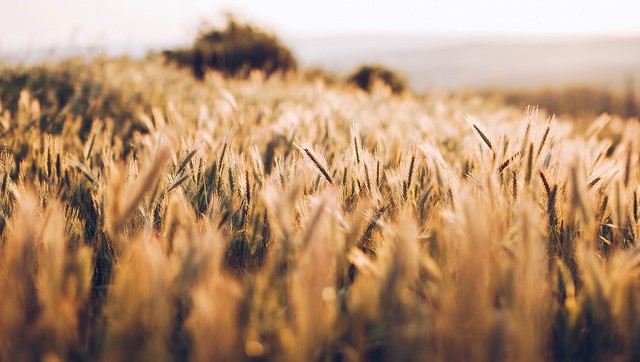 Although the East will see a break in the heat this weekend, the cooler trends will not expand back into the Plains. In fact, weekend temperatures across the Dakotas and Nebraska are forecast to trend well above normal. (Marco Verch, Flickr/Creative Commons)

WASHINGTON — A brief cool-down is in the forecast for the eastern half of the US this coming weekend (Jul 7-8). Beginning Saturday, temperatures across much of the Midwest and East are forecast to trend below normal for a couple days, before above normal trends return next week. Many from Illinois to the Northeast could see temperatures trend 5-10F below normal on Saturday, while widespread trends of 1-5F below normal are expected for Sunday. While we wait for the weekend, however, temperatures today (7/5) will be well above normal across the Midwest and especially in the Northeast. Accompanying this heat will once again be very high humidity which will make outside temperatures feel significantly hotter. With widespread highs pushing into the 90s today, the humidity will make it feel like 100+, prompting the issuance of numerous Heat Advisories. The extreme heat and humidity will start to dissipate by tomorrow, but much of the country will still trend warmer than normal. The warmest of the trends, however, will be in the West, especially in the northern Rocky Mountains down to Arizona.

Although the East will see a break in the heat this weekend, the cooler trends will not expand back into the Plains. In fact, weekend temperatures across the Dakotas and Nebraska are forecast to trend well above normal. Saturday could be especially hot in the western half of the Dakotas as temperatures trend more than 15F above normal. Much of the region will also see temperatures 10-15F above normal into Sunday. As we head into the start of next week, these much warmer than normal temperatures will stick around the Upper Plains and some warmer trends will begin moving back into the Midwest. The remainder of the week is forecast to trend warm to much warmer than normal across the country. 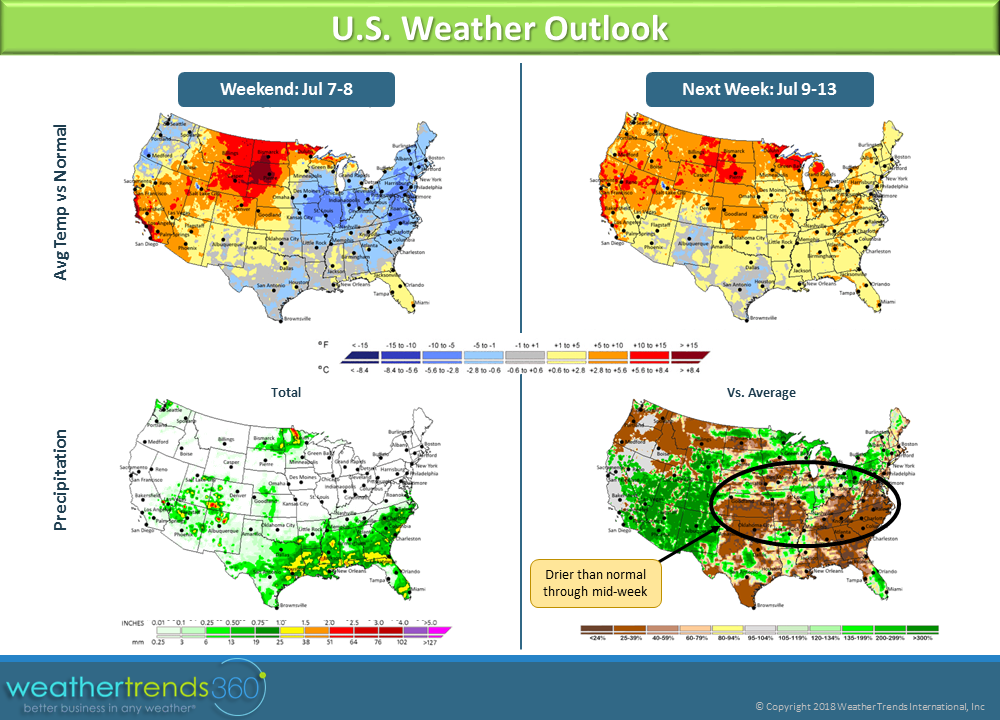 Rainfall will be generally below normal this weekend through the middle of next week for much of the Corn Belt and Northeast. Today, however, some showers are possible from Nebraska to New York, and by tomorrow, much of the East could see some rain. The rain will mostly clear out over the weekend and conditions will remain mostly clear through the middle of next week. An occasional stray shower cannot be ruled out though, especially in parts of the Upper Plains/Midwest.

As discussed before, long-range guidance still supports a warmer than normal July across the Corn Belt. Precipitation through the remainder of the month could trend somewhat wetter than normal in the Eastern Corn Belt, although generally a bit drier than last year. Much of North Dakota, Kansas, Oklahoma, northern Texas, Missouri, and Arkansas are expected to trend drier than normal. Iowa and Minnesota are currently expected to trend somewhat near normal for total precipitation, while areas of South Dakota and Nebraska could trend on the slightly wetter side. The Southeast and Northwest are forecast to be drier than normal, while the Southwest and much of the Northeast trend on the somewhat wetter side for the remainder of the month.