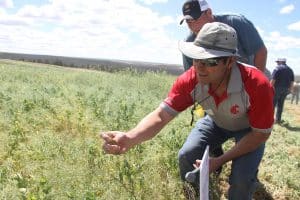 Drew Lyon points out the differences between similar weeds at a crop tour. (Courtesy Image)

“Every weed is different, and it’s fascinating to learn how some of these plants adapt to survive,” said Lyon, WSU’s Endowed Chair in Small Grains Extension and Research, Weed Science. “I enjoy figuring out how we can manage those plants to make sure growers aren’t hurt economically by their presence.”

Lyon is taking his curiosity, along with three decades of academic experience, to a new position as interim chair in WSU’s Department of Crop and Soil Sciences with a one-year appointment.

“Drew is very well-known and respected by the Crop and Soil Sciences faculty,” said Rich Koenig, acting dean of WSU’s College of Agricultural, Human, and Natural Resource Sciences. “He’s a great scientist who cares deeply about working with stakeholders and colleagues and will be a great resource as interim chair.”

Lyon temporarily replaces Koenig, who has served as chair of the department since 2017.

“Rich has been a very good leader for our department, and I see my role as keeping the ship sailing in the same direction,” Lyon said.

One of his biggest challenges will be navigating the department’s departure from Johnson Hall, which is slated for demolition in 2022. Crop and Soil Sciences has a significant footprint in the huge 1960s-era building.

“We have to transition out of the building and make sure we can get labs, offices, and people moved with as little disturbance to our mission and goals as possible,” Lyon said.

His other major priority is re-engaging the faculty, staff, and students with each other after more than a year working from home.

“Those social connections are so important, knowing the people that you work with,” Lyon said. “So, working within safe guidelines, I’m looking forward to getting back together in person and getting to know each other again.”

Lyon is well-known in Washington agriculture for his outreach to growers, something he hopes to continue even with added administrative duties. That includes the Weeders of the West blog, the Wheat Beat podcast, which Lyon hosts, as well as the WSU Small Grains website, which are all quite popular.

“I love working with growers and helping them out,” Lyon said. “Those outreach methods provide them resources and are a lot of fun for me. It’s important for the public to hear about the research being done, who is doing it, and why.”

Lyon has been at WSU since 2012, arriving after spending 22 years working for the University of Nebraska Panhandle Research and Extension Center in Scottsbluff, Neb.

His term as interim chair runs through June 30, 2022, at which point the plan is for Koenig to return as chair of Crop and Soil Sciences when a new CAHNRS dean is selected.

Weeders of the West: Occasional tillage and herbicide resistance