Home / Ohio / Weed control methods for greenhouses
A new user experience is coming! We'll be asking you to login to your Morning Ag Clips account March 1st to access these new features.
We can't wait to share them with you! Read more here. 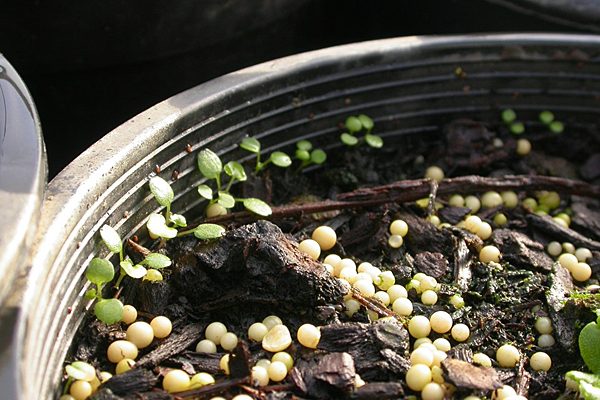 Seeds of several container weeds readily stick to plastic containers and germinate around the edge when old containers are reused. Notice the brown bittercress seed sticking to the container sides, along with germinating weeds. (Jim Owen at Virginia Tech University)

Dr. James Altland and his colleagues at ARS in Wooster, Ohio, with funding in part from the Floriculture and Nursery Research Initiative, have started documenting the critical temperature and exposure time needed for killing weed seeds with hot water or steam. The Horticultural Research Institute works closely with FNRI to steer research funds to projects like this one addressing propagation challenges.

Weed control in propagation is difficult because it primarily occurs in greenhouses or other covered structures where herbicides are neither labeled nor safe for use. Reuse of plastic propagation trays and containers exacerbates the weed problem. Seeds of many weeds, most notably bittercress (Cardamine flexuosa) and creeping woodsorrel (Oxalis corniculata), stick to plastic containers and trays and are reintroduced into the production system when these containers and trays are reused.

Heat from steam or hot-water will kill weed seeds. There is an abundance of research on the use of soil solarization to reduce weed seed populations and other pests in soil. Soil solarization, however, is a slow process that involves covering the ground with plastic to heat soil over several days or weeks. Research on soil solarization has established thermal killing temperatures over the range of 40 to 70°C with exposure times of hours to days. Use of hot-water or steam to kill weed seed would ideally use higher temperatures for shorter periods of time (seconds or minutes).

There is also evidence from some nursery producers that heat or steam will provide effective weed control. In Oregon, some nurseries have adopted the Grower Assisted Inspection Program to prevent the spread of the pathogen Phytophthora ramorum. Part of this program includes the use of hot-water for killing P. ramorum on reused plastic by dipping it in a water tank at 80°C for 15 minutes. While this control point was intended to prevent the spread of P. ramorum, it has also proven very effective in reducing bittercress populations.

Currently, there is no published (or otherwise) information on how high the temperature or how long the exposure time must be to provide 100 percent control of weeds common in greenhouse propagation. The most cited publication is over 60 years old and suggests that “most weed seeds” are killed with temperatures of 70 to 80°C when exposed for 30 minutes. However, the same authors indicate that a few resistant weed seeds require 90 to 100°C.

So far, Altland’s research has found that creeping woodsorrel required exposure to 90°C for at least five minutes for 100 percent control. Bittercress was completely controlled with 90°C water at just 1 minute.

Altland’s research is updating an old tool with specific information on which temperatures and exposure times can be used to eliminate weeds seeds between successive crops in propagation.