Subscribe
Home / Minnesota / Weed control ahead of the combine 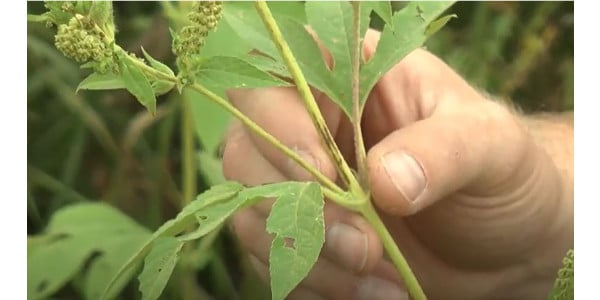 MINNEAPOLIS — For the most part, it’s too late to control weeds this year, but there is still time to limit weed seeds going back into the weed seedbank. Combine harvesters are notorious for spreading weed seeds. Hand-pulling or mowing weed patches are some of the last lines of defense before harvest. Taking the time now can pay dividends for weed management in the upcoming years.

Know the biology of the weeds you are trying to control. Waterhemp can produce over 250,000 seeds per plant. If waterhemp is prevented from producing seed for 4 years, over 99% of the seed bank can be degraded. The giant ragweed seedbank is degraded even faster, with over 95% degraded in just 2 years. However, a few weed escapes can produce enough seed to replenish the seed bank and negate past weed control success. The pigweed species waterhemp and redroot pigweed are able to produce viable seed within 10 days after pollination. If pigweeds in your fields have just begun pollinating, seed production has likely not yet occurred, and weeds need to be pulled or mowed soon to prevent viable seed production. Aside from very late-emerging waterhemp, however, most pigweeds have produced viable seed by now.

Many farmers have been “hand-pulling” problem weeds in their fields in addition to other weed control methods. Some farmers have wondered at what point mature weeds need to be carried out of the field to remove viable seeds from the field. Many weed seeds need to be “ripe” or physiologically mature before they would be of concern for next year’s crop. If not yet mature, weeds don’t need to be bagged and/or carried out of the field. If weed seeds have a darkened appearance already, they are most-likely viable already. Most weeds in Minnesota have produced viable seeds by now, or will very soon, so when pulling weeds the best option now is to bag and carry weeds out of the field.

If escaped weeds are not controlled prior to seed production, combines are one of the best ways to spread weed seed. If there is a confined patch of weeds, consider going around the weed patch to prevent spreading weed seeds throughout the field. Consider mowing down weed patches or weedy fencelines ahead of harvest to prevent seeds from entering the combine. It is VERY tempting to just combine straight through weed patches once you’re in the combine seat.

Pay attention to which weeds escaped control this year. Can you identify all of your escaped weeds? See these resources for identification help:

While mowing down weed patches or running the combine this fall, map out the weed issues in your fields, noting which species are present and where (Figure 1). This can either be done with precision ag technology or with a a simple drawing in a field record notebook. Both types of weed maps are helpful in making future weed control decisions.

Having this record not only allows you to catch resistant populations sooner, but can also help save money on herbicide application costs if weed problems are confined to a specific area. If heavy weed infestations are present only in some areas, such as stressed areas of the field or headlands, perhaps a spot application on those areas should be considered for next year.

Are your weeds herbicide-resistant? Populations of waterhemp, kochia, common and giant ragweed have developed resistance to multiple herbicide sites of action in Minnesota. Mowing down or pulling weed escapes can be a great way to get a better handle on herbicide-resistant weed populations by preventing seed production and depleting the weed seed bank.

Take the time now before combines start rolling to evaluate any escaped weeds in your fields. Consider hand-weeding, mowing down weed patches, and mowing fencelines before harvest begins. When you are combining, think twice before combining through weed patches. Is the few bushels in the small weed patch worth spreading millions of weed seeds throughout the field? In most cases probably not. In my experience, the best way to avoid this temptation is to mow down these weed patches before you get in the combine.